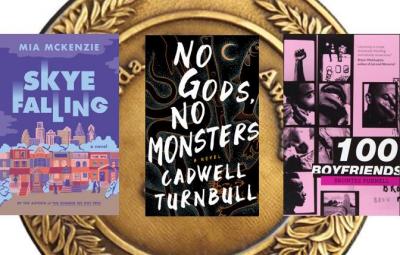 Always known for championing works published by emerging authors and small presses, this year's winners list is once again an impressive mix of books from publishers both large and small. For just the second time in Lammy history, a self-published work has been recognized, with Milena McKay's The Headmistress winning the Lammy for Lesbian Romance. As the Lammys have always done, this year's awards honor exciting new LGBTQ voices like Brian Broome, winner in the Gay Memoir/Biography category for his masterful debut memoir, Punch Me Up To the Gods: A Memoir, and Lee Lai, whose debut graphic novel, Stone Fruit, won in the LGBTQ Comics category, as well as writers who have been excelling in their respective genres for years, like Jeanne Thornton, whose critically-acclaimed novel Summer Fun won the Lammy for Transgender Fiction, and Sarah Schulman, whose Let the Record Show: A Political History of ACT UP New York, 1987-1993, one of the best reviewed books of 2021, won the Lammy for LGBTQ Nonfiction.

The evening's celebration, held virtually for the second year in a row due to the ongoing COVID-19 pandemic, also doubled as a fundraiser to help support Lambda Literary's programs. Preceded by an afternoon of readings from the finalists, the awards were once again a rousing celebration of LGTBQ literature, and the power of this community's voices.

The Lammys are the most prestigious award in LGBTQ publishing. Please join us in celebrating the following authors and their literary accomplishments.

• We Want What We Want // Alix Ohlin, House Anansi Press

• Gumbo Ya Ya // Aurielle Marie, University of Pittsburgh Press

• Punch Me Up to the Gods: A Memoir // Brian Broome, Mariner Books

• The One You Want to Marry (And Other Identities I've Had): A Memoir // Sophie Santos, TOPPLE Books

• Belly of the Beast: The Politics of Anti-Fatness as Anti-Blackness // Da'Shaun Harrison, North Atlantic Books