MARK MY WORDS: Stonewall is not my legacy 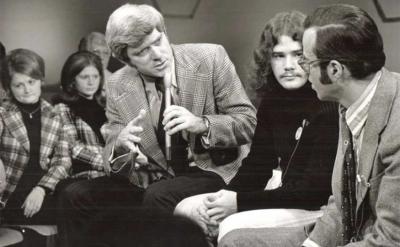 One of my favorite movies is Some Like It Hot, starring Marilyn Monroe, Tony Curtis and Jack Lemmon.

It's one of those old-time 1950s screwball comedies. At one point, Marilyn Monroe looks at Jack Lemmon — in drag no less — and says, "On my next birthday, I'll be 25, a quarter of a century — makes a girl think."

Well, I just had a birthday last week, and I'm way past that quarter-of-a-century mark and proud of the 69 years I've lived. But no matter what birthday you're celebrating, don't worry about the number, and as Monroe said in a way, think about what you've brought to life.

This year that wasn't a problem for me since we celebrated Stonewall 50 in June, and then earlier in the week, GLAAD announced that they'd recognize my pioneering work in television at the 31st annual GLAAD Media Awards. They went on to give my bio: Stonewall, the first gay pride, Gay Liberation Front, Gay Youth, PGN, the John C. Anderson LGBT-friendly senior housing center and even projects I've long forgotten.

The list made me recall another line from another of my favorite movies, Auntie Mame, which is my life's motto: "Life is a banquet, and most poor suckers are starving to death." She then says, "Live, live, live."

Putting the two together leads me to a decision that might surprise many. While I know I have an incredible body of work that I plan to expand upon for many years to come, there's only one area that I really consider my legacy — changing American media.

Mind you, I'm very proud of all the other events or involvements in my life. I'm so lucky to have worked with some incredible people who remain friends to this day. While many others will want to list Stonewall as their legacy, I'm not one of them. I take full ownership of fighting the TV networks in 1973. When I watched Ellen DeGeneres come out in an episode of her show 24 years later and "Will & Grace" air the following year, I was proud of that pioneering work. Whenever I see an LGBT newscaster, anchor or character on TV, I feel a sense of pride then too. As I said in 1973, we will no longer be invisible.