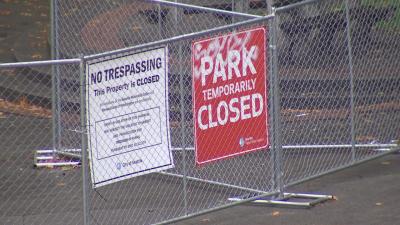 King County and the City of Seattle have transmitted legislation to complete a land swap transaction that will transfer ownership of City Hall Park to King County in exchange for 13 county-owned properties. The swaps will allow the County to complete its downtown Civic Campus, and will further the City's goal to expand and protect green space and public parkland particularly South Park.

In exchange for the transfer of the 0.56-acre City Hall Park located just south of the King County Courthouse and the City's agreement to vacate the roads surrounding the property, King County will transfer approximately 13 parcels of land totaling 1.35 acres. The new parcels include a 0.4-acre lot adjacent to the South Park Bridge and Cesar Chavez Park, as well as several smaller parcels near city parks. Many of the parcels in the transfer are located adjacent to natural areas, and their acquisition will increase green space protection and enlarge the environmental canvas for future restoration projects.

"Ensuring public lands continue to be used for the public good is an important mission not just in open spaces, but within our urban centers as well," said Executive Constantine. "City Hall Park will allow King County to map out a vision for a complete downtown Civic Campus, including exploring reopening the historic Courthouse entrance and engaging the surrounding neighborhoods, while keeping the land for public use."

"For years, we have partnered to revitalize the area around South Park Plaza, and with this new property, we can further our commitments in the Duwamish Valley action plan and expand the community led vision for the area. With the 13 new properties across the city, we can expand park access in our growing city," said Mayor Durkan. "King County and members of the King County Council have committed to ensuring the safety and vibrancy of City Hall Park for years to come, so the City of Seattle is eager to support the county's investments and vision towards the park and campus."

The City of Seattle continues to be committed to expanding park, open space, and community gathering places to a growing and densifying city. Building on the Duwamish Valley action plan and vision for South Park, the City of Seattle has been engaging the community around the future of South Park Plaza to create additional community access and green space. More than $2 million is available for the planning, design, and construction of the area around the plaza in partnership with SDOT.

Through these acquisitions, the City will also able to make significant progress on building up the climate resiliency and livability of the communities aligning the Duwamish River and officially transfer Greg's Garden P-Patch in Ballard to the City of Seattle. These spaces will build upon the community-driven priorities for clean, safe outdoor spaces that support youth, community and economic development. These properties will serve as neighborhood gathering spaces, expand waterfront access, offer recreational programming, add to the Burke-Gilman greenway, and build capacity within community organizations and businesses throughout the City.

The transaction agreement was transmitted today to the King County Council and Seattle City Council for their approval, sponsored by Councilmember Jeanne Kohl-Welles and Councilmember Debora Juarez, respectively.