Registering the new voter: Why there's more to it 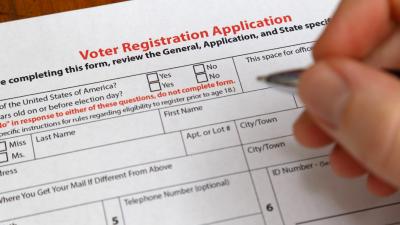 The 2018 mid-term elections and the 2020 general elections saw a massive surge of voting, as many people, especially the young, voted at the highest rate since 1900. This huge increase showed, with some unexpected results, that the care and feeding of the world oldest and most important democracy really does rest on just one thing: voting.

If one looks only at the young vote, Arizona, which birthed Barry Goldwater and has long been a conservative bastion, would turn blue (editor's note: as it happens, it did anyway). Texas would too. That this can be attributed to the young vote is hardly a surprise.

Although this uptick was welcome, we still have a crisis of voting, in that not enough of us do it.

Why? The Founders, the white men who wrote the Constitution and muscled its adoption by the warring factions that made up the original 13 colonies, made compromises to get the necessary two-thirds, including that there would be no federal oversight of voting - the states would be in charge of all elections, even federal ones.

Plus, the small colonies were concerned that they would be overwhelmed by the large ones, so they insisted on equal numbers of senators (two each) and used the House of Representatives for proportional representation.

They also restricted voting to white men with property, and had state legislators choose senators (direct election of senators would not take place until 1913). Voting was for elites, and echoes of that still resonate today.

There has been progress: women got the vote in 1920, and President Johnson pushed through the Voting Rights Act and the Civil Rights Act in the 1960s. He failed to get the voting age lowered to 18, though: Oregon and Texas used the federal courts to delay its implementation until President Nixon brokered a deal, after which the Constitution was amended.

We are now facing a huge bulge of potential new voters, the millennials, and their numbers are astounding. They can determine every future election - if they choose to register and vote. The $64,000 question is: Will they?

In New Mexico, Everybody Votes and the New Mexico Voter Group focus on the nuts and bolts of registering voters: setting up tables, getting young voters to register, then getting the forms to the county clerk. Yet we despair that we are not doing enough. Many eligible voters, especially young ones, breeze by us, muttering something about "not voting."

We have registered a huge chunk of voters, with few resources, so we know that it can be done. Yet we are not efficient: we need to scale this effort, we need to bring voter registration to the fore all over the country. Clearly we could use resources and money, but we also believe that we need a revolution in how people register to vote. How do we do this?

In short, we need to move voter registration from an active endeavor (requiring effort by the voter) to a passive one. Oregon, with its automatic voter registration, is showing how this can work. Vote-by-mail elections also seem to increase participation. Yet the adoption of these methods nationwide seems to be a ways off, and in the meantime, we need to register these voters now.

We have listened closely to those that we do register, as well as to those that don't want to register. Although we are reluctant to draw definitive conclusions, because there was no formal research study (it was simply observational), there was enough data for us to draw some preliminary ones.

The person who registers someone to vote is the very first contact that people have with the mechanics of democracy. This voter registration agent (VRA) needs to be prepared to both register the voter and give that person a reason why to register, and why they need to vote. That is asking a lot, but it seems to be a requirement to have a successful encounter.

Few states require any training for people that want to register voters. New Mexico, which does require a training class, is one of the strongest. Its training, handled by the county clerk, requires an understanding of the registration form, and the formal issuance of a voter registration number. The state also issues a VRA certificate with a number, which allows it to track the activities of the agent.

In New Mexico, a huge number of people have taken the VRA training. Yet we have few who actually do it. In other words, it appears that many people are willing to register others to vote - but then after taking the class, they fail to do so. We hypothesize that many of VRAs feel ill equipped to register voters, even after the class, so they don't.

We have a huge task ahead of us. We have proven, as evidenced by the turnout in the 2020 elections - the best in 120 years - that voting is key. We need to continue to train VRAs and make sure that they feel prepared.

Stacy Abrams, who led a group that registered 800,000 voters in Georgia, shows what can be done with leadership and political will: she, and her group, will helped the balance of power in Washington, giving the Biden administration a chance to govern.

We need resources, we need direction, we need to scale. We can and have identified the problem, and we need to quickly implement the solution. We can do it, if we want to. Do we, as citizens of the world's oldest and most important democracy, have the will to do this? I hope we do. I believe we can.

Dave Mulryan is the co-founder of Everybody Vote, a group that registers high school seniors to vote. He is president of Mulryan/Nash Advertising, Inc.