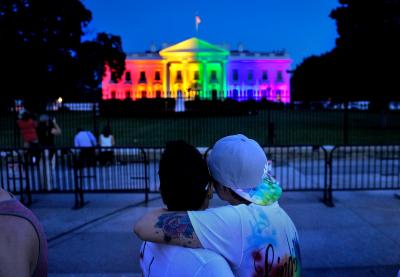 As a journalist covering LGBT issues, this will be the 8th presidential transition I've witnessed, from the Carter Administration to the Biden Administration. Of those 8 president-elects, no one has reached into the LGBT community as President-elect Joe Biden has, and no one has made so many promises. While Biden has a strong record on LGBT issues, some had suggested his promises were just campaign talk, as so many elected officials are apt to do. But he has quickly proven those people wrong. He has already backed up his words with action.

Even before Biden/Harris take the oath of office and walk into the White House, they have fulfilled several of their promises to the LGBT community. They promised that their administration would look like America and would include the LGBT community, particularly the trans community. The incoming Biden administration has already delivered more LGBT appointments to high level administration positions than any other in U.S. history, including Pete Buttigieg as Transportation Secretary, who will become the first LGBT cabinet member confirmed by the Senate, Karine Jean-Pierre as Principal Deputy White House press secretary, Pili Tobar as Deputy White House communications director, and Gautam Raghavan Deputy Director of the White House Presidential Personnel Office.

But it was also announced today that Pennsylvania's own Dr. Rachel Levine has been appointed Assistant Secretary of Health and Human Services, the highest ever trans appointment to the U.S. Government. Dr. Levine has been stellar in keeping Pennsylvanians safe and informed during the COVID-19 pandemic. She will be a great addition to the Biden administration. Her appointment stands in stark contrast to the Trump-Pence administration, which removed trans protections in healthcare among many other anti-trans acts.

Before the Levine announcement, I reached out to several people on the Biden team to get an update on what our 46th President might do regarding LGBT issues on Inauguration Day. Knowing that the transition team is keeping details very close to their vest, I smiled when I was told to read the Q & A with Candidate Joe Biden that we did in PGN as well as his official position paper. [NOTE: Mark Segal's Q & A with Candidate Joe Biden was reprinted in the November 13, 2020 edition of the Seattle Gay News - http://www.sgn.org/sgnnews48_46/page1.cfm.] Both contain too many things to complete in one day. But, as transition spokesperson Jamal Brown told me, "President-elect Biden is committed to advancing the most pro-equality agenda in history and his administration will begin implementing that vision on day one on key LGBTQ+ priorities." Step by step, change will come.

President Joe Biden and Vice President Kamala Harris have already created LGBT history by their appointments. I have no doubt they will take action on the rest of their promises to the LGBT community. Their ambitious LGBT equality agenda will begin shortly after they take the oath of office. Of that, we can be 100% certain.