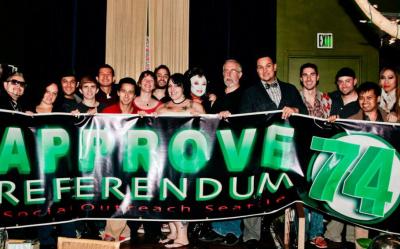 Before marriage equality became the law of the land in the United States in 2015, it was passed in the Washington state legislature in 2012, then affirmed by a public vote in the form of Referendum 74. The man who worked long and hard to achieve this victory pushing it all the way to victory was then State Senator Ed Murray.

It has been a little over 3 years since Murray left [Seattle's] Office of the Mayor, and we couldn't be more grateful that he agreed to respond to questions about his greatest accomplishment: marriage equality in Washington state.

MK Scott: As we mark the 8th anniversary of the passage of Referendum 74, one of the national LGBTQ movement's greatest triumphs is the achievement of marriage equality. But before the U.S. Supreme Court made it the law of the land, you, as a state senator, made it a state issue. What was the process?

To your question: the issue of marriage equality cannot be separated from the 29-year struggle to pass the Washington state LGBT civil rights bill. That effort began in 1977, when members of our community were able to get the bill introduced in the legislature.

By the late 1980s, what was then just the lesbian and gay civil rights bill picked up momentum with the election of Cal Anderson to the Washington State House of Representatives. While Cal was fighting HEP-C to HIV/AIDS, he did not live to see his bill passed. But he blazed a trail for the rest of us.

I was appointed to the House in 1995, and during my first day of my first session, the Washington State Defense of Marriage Act (DOMA) was introduced. In the previous election, the Democrats had suffered heavy losses, and the Republicans had a majority in the 60s; the Senate was barely Democratic. While we continued to introduce the now LGBT civil rights bill (I added "bisexual" and "transgender"), our efforts were focused on fighting DOMA.

It was a difficult time in our community: Cal had died, I was new, and it was the darkest days of the HIV/AIDS crisis. There was even discussion in the community about not fighting [DOMA] at this time. In the end we did fight it, and because of that, it ended up taking them three years to make it law.

The legislative debates were ugly, and when they finally passed it on the early morning hours of Valentine's Day 1998, I remember being sick to my stomach and walking out of the rotunda, not speaking to anyone. I had just watched the legislature restrict the rights of the people of this state - and of one member of their body: me.

Governor Lowry and I decided we needed to send a message of hope, and in 1997, we introduced one of the first marriage equality bills in the nation.

During the late '90s, the state did not have a functioning statewide LGBT political organization, so I and others went around to various organizations, seeking to put one together and to hire a lobbyist. Our community nonprofits were a bit worried that too much political activity would negatively impact their tax status, so we launched an education effort, and the result was Equal Rights Washington. It hired two women lobbyists who could work both sides of the aisle, which was one of the smartest moves by our community.

We also changed our message from one of victim hood to "we are your neighbors, your businesses, your family." We emphasized what we added to the vitality of the state.

When the Democrats regained the majority in the House (the Senate would flip back and forth, it seemed, with every election), we passed the civil rights bill over to the Senate, where it died. Finally, in 2005, we were one vote away. The religious right made some of our business supporters very nervous, and we lost by one vote.

As we entered the 2006 legislative session, we had strengthened our support in all sectors, and the LGBT civil rights bill finally passed by a single vote, when Bill Finkbeiner, the brave leader of the Senate Republicans, voted with us and stepped down from his leadership position. He really has never been fully honored by this community.

The reason I spent so much time on the LGBT civil rights bill was not only because it was a victory that was supremely important, it gave us a blueprint, a strategy for passing marriage equality.

MKS: When you got the votes for the bill, what was going through your mind?

Murray: It was an incredible moment. It was the one thing I wanted to accomplish in life, to help make my friend Cal's vision a reality. Twenty-nine years of so much pain, work, loss, death, and vision had changed the future for the better. The celebration in Seattle was moving beyond words.

MKS: What came next?

Murray: Our post-victory strategy included a possible fight at the ballot to overturn the legislation. We were ready and organized, but Tim Eyman failed to get the signatures needed to do so.

I ran for the Senate [in 2006] and won, and Jamie Pedersen won my House seat. We believed the time had come to legislatively overturn DOMA and pass marriage equality.

We had to also face the cold, hard reality that we could win in the legislature and lose at the ballot box. As always in our community, we argued a great deal before we landed on a multi-year strategy of public education breaking marriage out into its individual parts, each year focusing on, for example, the right to hospital visitation and funeral arrangements. Year by year the public saw families with real struggles, which dialed down the culture wars and brought us closer to our goal. Educating the public until we believed we could withstand a ballot challenge deeply influenced all parts of our strategy.

One crisp morning in 2012, Sen. Mary Margaret Haugen, a Democrat who represented a Republican district, came in to my office. [My partner] Michael happened to be with me that morning. She told us she would be the 25th vote - the vote we needed - to pass marriage equality in Washington state. I remember feeling how momentous that was and also the price I knew Sen. Haugen would pay.

MKS: When Ref. 74 did pass [upholding the marriage equality law], what did you and Michael say to each other?

Murray: Michael said to me, "We are getting married this year. My parents are in their nineties. I don't care how it looks during your campaign; I want my parents at our wedding."

I realize I have told only a tiny slice of an enormous story involving thousands of people; in time I hope as a community we take on an oral history project of all these many legislative efforts past, present, and future.

This interview first appeared in the Summer 2019 issue of Unite Seattle Magazine. A few minor revisions have been made including bringing date references current to today's date