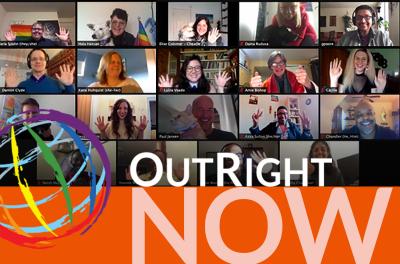 For me, as for many of us, the end of the year tends to come hand in hand with reflection about the past year, and looking forward to what comes next.

It has been a hard year, unlike any other. COVID-19 has left no person unaffected, and LGBTIQ communities in particular have faced devastating consequences around the world, leaving us more isolated, more vulnerable, more excluded, and physically cut off from chosen families and communities.

"Community is a promise that we are not alone," said Hamed Sinno in their heartbreakingly beautiful and emotional keynote speech

at OutSummit, OutRight's annual global conference for LGBTIQ Equality which was held virtually this year. Those words couldn't be more true. Especially this year.

But while we could not be with our communities physically, we did find community in virtual spaces. And nowhere was this more clear than at this year's OutSummit. 1650 people from over 100 countries registered to take part. The levels of engagement in sessions, in plenaries, in chats and the networking space was beyond anything we could have imagined. It was a heartfelt reminder of the strength of our community, and the potential of our movement.

Over the last year Bhutan and Gabon have decriminalized same-sex relations. Sudan removed the death-penalty for same-sex relations. The UN Independent Expert on Sexual Orientation and Gender Identity called for a global ban on sexual orientation and gender identity change efforts (so-called "conversion therapy"). Montenegro passed partnership legislation. People around the world rose up against structural racism and police brutality in the wake of the murder of George Floyd. Individuals, corporations, foundations and governments supported OutRight's COVID-19 Global LGBTIQ Emergency Fund, which to date has distributed 1 million dollars for LGBTIQ people around the world.

But over a third of the world's countries still criminalize same-sex relations. LGBTIQ populations continue to face a devastation of livelihood due to COVID-19. Forces opposing gender and LGBTIQ equality are still way more funded and organized than us. We still have an uphill battle.

The status quo is unacceptable. We must fight against invisibility, exclusion, poverty, anti-trans ideologies, anti-woman ideologies, anti-Blackness, discrimination in all its forms, and we must always fight anti-LGBTIQ violence!

We are not alone. We have a global movement, and together we can, and do, move mountains. I wish you all the best for the next year, and hope that it brings with it more progress, more strength, and a return of our physical, as well as our virtual, community spaces.

P.S. If you missed OutSummit, or particular sessions, you can watch the recordings at: