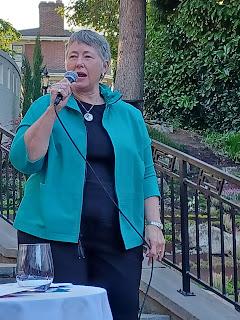 It had been three years since I last seen Annise Parker, the former out mayor from Houston and currently the president of the Victory Party Fund, in Seattle. The last two summer parties were canceled due to COVID. We chatted a little and made arrangement for a zoom interview a few days later.

MK Scott: Tell me about some of the open candidates that are currently running this year.

Annise Parker: So, well, there's more than a thousand out LGBTQ candidates running across America. It's slightly a larger number than two years ago. We have endorsed a little more than 300 of those candidates so far, although we'll have another batch endorsement as we get
close to November. I'm going to give you two answers: one, you know, there's some really exciting congressional candidates, but everybody pays attention to your congressional candidates. And then there are some interesting down ballot races as well, and we're really the only national organization that engages in down ballot races. But for the congressional races, you might want to highlight just a handful; one, Becca Balint is running for congress out of Vermont. They have only one member of congress, two senators, but a representative. She is the first woman, and obviously the first LBGTQ person elected there, but it is a statewide race.
So we are fully backing Balint, and right now she's in a two way race. She's the president of the senate, she's in a two way race with Lieutenant Geller, also a woman. Vermont will send in their first woman to congress, which is great, but we want it to be Becca. Daniel Hernandez, who's a great story running for congress in Arizona. He is the person who, as an intern, saved Gabby Gifford's life. He was shot in the head. He was ... after he was an intern for her he was elected to the school board there. Then he was elected as the state representative, and now he's running for congress. It's a highly contested race, but he's contending, and we're all excited about Daniel. And then I'll also highlight Robert Garcia who is the current mayor of Long Beach running for congress. He should, you know, they have, California has the single primaries, and two of them end up in the end, but he creamed everybody in round one and should be the next member of congress
from our community, we're very excited. On the other hand we have both Sharice Davids and Mondaire Jones who had their, who are incumbents, who had their districts just eviscerated through redistricting and are in tough battles to return. They're both really excellent members of congress. There are more than a hundred out candidates for congress this year. We've endorsed about a dozen of those. Lots of them don't have really a path to victory, they're viable candidates, but it's exciting to see so many people willing to step up and get out there and put themselves in front of others.

AP: Yeah, it's a legacy seat. To be already at this stage of our movement to have a potential legacy seat in a governor's race is astounding and exciting, and Tina's a great candidate. It is going to be a very tough race for two reasons; one, Oregon, like Texas, has unlimited financing. There's no cap on what you can contribute to a campaign. So the race could get quickly really expensive. And you have Tina as the democrat, you have a republican, and then you have someone running as an independent who is apparently a republican and then became a democrat and now running against an independent, who has already been like the statewide. So you have, and you can definitely be a spoiler in the race. It's kind of hard to tell how much of an impact, but Three wealth financed campaigns sort of covering the waterfront. Tina has been the, like the speaker of the house for about eight years, which is a long time for serving a leadership position. Clearly has the respect of her colleagues, and must have great political skills, cat hurting skills, I would say, because that's a tough position. And she crushed it in the primary, but with the three way race everybody is going to have to pay attention and show up in Oregon to get her across the finish line. The other big governor's race, Gerry Paul is running for re-election and we're looking forward to his re-election, but Maura Healey, Attorney General of Massachusetts is going to be the next governor of Massachusetts. She is well ahead in the democratic primary. It's an August primary. And Massachusetts has elected several moderate republicans, and the current governor is a moderate republican, but it looks like Maura should have an excellent shot in November. And absolutely would be a great governor, but also has, I don't know if she has any ambitions, but I can tell you that she's a presidential caliber candidate. And one of the goals of victory after the last presidential campaign we were, we got friendly with Pete Buttigieg, and he did a good job, but it's a heavy lift going from a relatively small city to a presidential contender. So we absolutely believe it's imperative to elect more governors, more big city mayors, more senators, folks who have the, you know, objective status to move up.

MK: Do you think gay rights in marriage will be protected by the Equality Amendment?

AP: Well, I don't know that the equality act will pass, but the Marriage Equality act, Senator Baldwin is whipping that as we speak. And I have every reason to believe that the democrats will be able to pick up, considering the number of republicans who voted for Marriage and Health that they will be able to put at least ten to get us there. The alternative is, you know, I know that there are some other riders saying, oh, you know, it's not really an issue, we shouldn't have to deal with it.When you have a sitting Supreme Court justice say; this is what we need to do next, and we need
to take away marriage, we need to take away this and that. Then you have someone like Ted Cruz, Senator Cruz saying; yeah, we need to do this, and other senators jumping on, it is an issue that needs to be addressed because just like in a similar way, but also standing on its own to the
abortion issue, where we are now because the Supreme Court really has states where you can get an abortion and states where you can't, we're going to end up with states if they proceed because all these, you know, Griswold, Bergenfield and Lawrence were all under guarded a right to privacy. If that goes away then you're going to end up with states where you can
get married, it's very much like before Obergefell, but what do you do with a million people who have been married since then and are full faith and credit clause as interpreted in the constitution. We recognize marriages from other states. This will codify that. It won't standardize our relationships and our ability to marry across the country. There will still be state differences, but it will force all states to recognize marriage. And it will affirm that the federal
government, as it did after the Windsor decision, will recognize marriages. It's not perfect, but it's a really important step. Because it'll be chaos if you just assemble marriages that way; well, I'm married, but my friends over here can't be. How do you deal with that? So, apparently Justice Thomas doesn't care, but some people do.

MK: Do you think in order to be able to rectify Roe V. Wade do you think they could probably do an amendment on that?

AP: Well, I mean, clearly you get through the house, but you can't get it through the senate. Marriage is a much easier issue in a lot of ways, I mean, marriage is a contract law. And it's not, while there are certain people who are offended by same gender marriage others recognize it as
both an emotional issue but a contract law issue. So it's fundamentally different than abortion.

AP: You know, I think Claire is in good shape. I think Emily, just again, the issue of redistricting and being what happens is a little bit more of an uphill battle. But they do a great job. They're real constituents and they're exciting candidates. We're going to miss Kate Brown. I mean not only is she a very capable and effective public servant, she's a heck of a nice person. And she cares deeply about her constituents, but she also, again, understands the power of representation, her willingness to be open about her sexual orientation, even though married to a man in a very, you know, from the outside, a very mainstream relationship, being willing to embrace that she's bisexual. And I'm leaning into that, it has opened the doors for many candidates in other places, and certainly the excellent job that she has done, I mean, Tina Kotek doesn't have an easy path, she is, you know, she doesn't have to run to say I'm going to rescue the state. She could run to say I'm going to continue the great policies and we're going to continue to get better.

AP: Some of my constituents wanted to do one for me too. It didn't get off the ground.

MK: So the question is why do they usually target the LGBTQ candidates for recall campaigns?

AP: Okay, I think you've answered your own question. It's because we are LBGTQ. And there are certainly folks who, you know, but are offended by our very existence. The organizer behind, the person behind most of the anti-LGBTQ, the organizer here in Houston, is obsessed with, I mean, literally he says things like I pollute the gene pool. So they target us. Again, if you look at, you know, we're not ... better or worse as public officials. I mean I happen to think that there's so few of us that we actually tend to over perform because it's harder for us to get there. But we are targeted simply because of who we are. That's just ... yeah, so ...Clearly, if we do things that offend people, and Adams had some legal issues that are, some issues that came to light that she had to address. But there were no scandals in my a administration, there were no scandals that I know of in Kate Brown's administration. Durkan was attacked because it was a Catch 22 situation, she was attacked from the left and the right. Protests. That's the nature of the job.