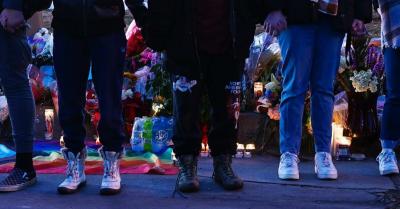 On a night when many of Seattle's LGBTQ+ community gathered to cultivate our next generation of scholars at GSBA's Equalux event, a gunman in Colorado Springs entered Club Q, an LGBTQ+ nightclub, taking the lives of five people and injuring 25 more. Our hearts are broken for the families and friends of those murdered and injured, and for the LGBTQ+ community in Colorado Springs and the surrounding areas. This heinous act of violence, committed on the eve of Transgender Day of Remembrance, where we as a community hold vigil to remember the lives of trans folks who have been murdered in the past year, reopens wounds as we also remember the 2016 attack on the Pulse LGBTQ+ nightclub in Orlando that killed 49 people and injured 53 more.

While investigations are undergoing to determine the motive, there is one thing we can be certain of — everyone who went to Club Q that night went to be in community, to be themselves in a welcoming environment, and to be in a safe

queer-friendly space. None were anticipating being victims of gun violence. We do not yet know the names of those murdered on Saturday night, the names of those injured, nor the names of the heroes who risked their own lives to stop the gunman from killing more people. We do know that no one should have had to lose their life or experience this kind of trauma.

Over the past several years we have seen a rising number of extremists, popular commentators, and politicians who are more and more comfortable using hateful rhetoric and spreading disinformation about the LGBTQ+ community. They use social media platforms like Tik Tok, YouTube, Twitter, Facebook, and others, as well as platforms on major news media and even from their seats as elected officials to tell lies and stoke fear about the LGBTQ+ community in the hearts and minds of their followers. Make no mistake: their divisive, fearmongering, hate-filled commentary drives others to act out in many ways. Sometimes it looks like insults and intimidation. Sometimes bias and discrimination. Sometimes it is the tragic indiscriminate murder of LGBTQ+ patrons seeking a safe space in an LGBTQ+ nightclub. The dangers are real — especially for trans women and trans women of color.

In times like these when senseless tragedy befalls innocent people, it is sometimes difficult to process the feelings of loss and grief mixed with anger, fear, and frustration. These feelings of fear, anger, grief, and hopelessness, while valid, are fleeting emotions whereas our community is steadfast and strong. We are not going anywhere. We believe the best way to honor those whose lives were taken is to continue to gather for occasions of mourning; for organizing; for times of joy; and to make our voices heard. In community our voices are that much louder, our joy is that much greater, and the heavy burden of grief is that much lighter.


Today we are heartbroken and mourn the loss of life and the trauma inflicted at Club Q on the Colorado Springs and surrounding area's LGBTQ+ community. We send our love and healing support to them. The horrific events of this weekend

do not define us, but they serve as a reminder that the work — the struggle for our recognition and equality — is not done.