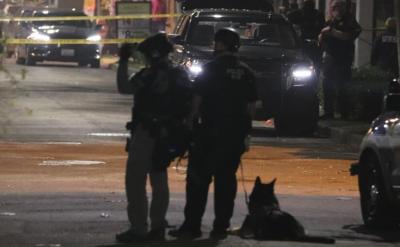 Cal Anderson Park was the site of a tragic domestic violence homicide on Wednesday that cost both adult individuals their lives. The Seattle Fire Department and Seattle Police responded to an unresponsive woman, known to many as Lisa, in the northeast portion of the park at approximately 8pm. She was later declared dead and the cause of her death was determined to be a homicide.

Lisa's common-law husband, known as Travis, became a person of interest in her death but had barricaded himself inside the Pump House on the west side of the park. A witness stated he had been seen going into the Pump House with what appeared to be a pipe an hour or two before Lisa's body had been discovered.

SWAT officers entered the building after midnight when a variety of tools and techniques failed to coax the man out. Travis' body was later located at the bottom of a 10 foot tank, which contained approximately 50 gallons of 12 percent bleach solution, according to the Seattle Police Blotter. He was also declared deceased. Detectives and the Medical Examiner responded to the scene to begin their investigation. A HAZMAT team was also seen outside the Pump House.

Travis was known to this writer and many unhoused individuals who reside in the park. He was said to be "agitated and unwell" just hours before his death. Volunteer community medics had been assisting him with a wound he received when he accidentally fell on a hatchet last Monday. The wound was said to have become "septic" on Tuesday but he declined "appropriate medical care." A person familiar with the situation added that the couple had previously attacked one of the community medics, resulting in her requirimg "staples in her head."

On August 16th, Travis had climbed a tree in front of the East Precinct, prompting a large response from Seattle Police at approximately 12:30am. He was also seen following one Black Lives Matter protest — using a street sign to cause minor property damage. A crisis volunteer was seen talking to him. In recent days, Travis is said to have begun self-medicating with illicit drugs, which led to a rapid decline in his mental health. It was also reported by one individual with knowledge of the situation that "official crisis intervention case managers" had been working to have him involuntarily detained for medical care.

Friends and community volunteer medics described Travis as "fun", "nice", and "very friendly" — "until he isn't." One volunteer medic described the situation in Cal Anderson Park this way: "It's very weird out there — a lot of folks that just want to be left alone, a few folks who cause trouble, and then there's Travis."

Seattle Police have swept the park on numerous occasions, temporarily causing the unhoused to find shelter elsewhere. Officially, the park has been closed since June 30th. However, the unhoused residents of Seattle often return. Recent efforts have been made to provide community-led mutual-aid, including meals, outreach and, even, medical and mental health services.

According to the Police Blotter, two homicides last year are linked to the park. On March 30, 2019, a 21-year-old man was shot following a disturbance at the basketball courts. Likewise, a 25-year-old female was stabbed in the chest and later died. At least three deaths occurred near the park this spring and were linked by authorities to the Capitol Hill Organized Protest.

The Seattle Police say they are carrying out "an active and on-going investigation" related to the deaths and ask anyone with information to call contact the SPD Violent Crimes tip line at 206-233-5000.