Police sweep CHOP out of existence 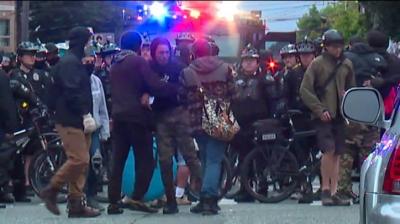 After 24 days of occupation by Black Lives Matter protesters, the Capitol Hill Organized Protest (CHOP) on Seattle's Capitol Hill is no more. Mayor Jenny Durkan issued an executive order on Wednesday to clear the CHOP and the homeless encampments at Cal Anderson Park. The Seattle Police Department, Bellevue Police Department and the Seattle office of the Federal Bureau of Investigation swept through the several block area with tactical vehicles, batons and body armor, making 44 arrests by day's end.

"Our job is to protect and serve the community," explained Seattle Police Chief Carmen Best during a Wednesday press briefing. "Our job is to support peaceful demonstrations, but what has happened here on these streets over the last two weeks is lawless, and it's brutal, and bottom line, it is simply unacceptable."

Durkan's executive order states "...the City's obligations under the First Amendment do not require the City to provide limitless sanctuary to occupy City property, damage City and private property, obstruct the right of way, or foster dangerous conditions..." and goes on to list recent shootings and other crimes that threaten "public health, life, and safety..." The order will remain in effect for 10 days and declares that any gatherings in this area are considered "an unlawful assembly" requiring "immediate action" from city agencies.

"If all we remember from the last few weeks is what happened in those few blocks on Capitol Hill, we've missed the point," said Durkan. "The murder of Mr. Floyd ignited a movement across the globe, but that movement was because of years and centuries of systemic racism that resonated in the bones of so many people."

Capitol Hill has seen four shootings and various crimes in and around the CHOP in recent weeks. A 19-year-old, Lorenzo Anderson, and 16-year-old Antonio Mays, Jr. are among the dead. Last week, Best said "enough was enough," while standing inside the CHOP on Monday.

"Two African American men are dead, at a place where they claim to be working for Black Lives Matter," added Best.

Durkan has sought to meet the demands of Black Lives Matter protesters but has come up short of meeting all their demands. The mayor had announced last week that she would submit a budget rebalancing plan that included another five million dollars for mentoring and summer learning programs for Black youth and includes $20 million in cuts to the SPD budget for the remainder of this year. She also committed to expediting the transfer of city property in the Central District neighborhood, the historical home of the city's Black community, to Black organizations.

Louise Chernin, President & CEO of the Greater Seattle Business Association _ the state's Lesbian, Gay, Bisexual and Transgender chamber of commerce, stood alongside Durkan and Best at a City Hall press conference last week in the days leading up to Pride weekend. "It is hopeful to see tens of thousands of people in the street but it is very frightening when you realize . . . there is so much anguish and anger. It is rightfully there," she said. "As part of the LGBT community, we know about police violence also. We know police violence is real and that the police have a long way to go to become part of the community that is part of public safety and not only about arms and control."

During a City Council meeting Wednesday, Councilmember Kshama Sawant denounced Durkan's actions, saying she was "aghast" but not surprised. "Occupation is a very effective tactic as part of movement building and we are facing major repression, so we need to come together as a movement to figure out what we're going to do to move forward and win our demands," she said.