Excluding blue from the rainbow: Will Seattle Pride ban cops? 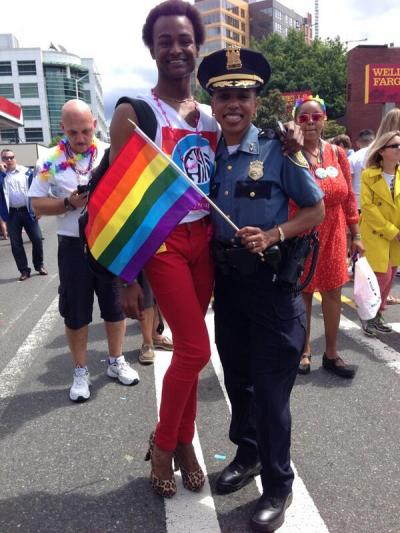 One year ago this week, George Floyd was murdered by Officer Derick Chauvin as Minneapolis police officers looked on, passively. Floyd's death sparked outrage throughout the nation, and in the following weeks, Black and Indigenous people and people of color (BIPOC) and allies alike took to the streets to march and demand justice for all unarmed Black people murdered at the hands of police. The activism culminated in a battle cry to "defund the police," sparking debate and backlash across a nation divided on what exactly this means or might look like.

In the months thereafter, calls to defund the police picked up around the country; however, few jurisdictions took it upon themselves to do this, and the movement began to stall. That is, until the LGBTQ+ community in New York made an astonishing announcement on May 15.

NYC Pride and law enforcement As New York City prepares for this year's Pride celebration, special attention is being paid to some of the community's most vulnerable groups. Heritage of Pride, the march's organizers, released a statement saying, "NYC Pride seeks to create safer spaces for the LGBTQIA+ and BIPOC communities at a time when violence against marginalized groups, specifically BIPOC and trans communities, has continued to escalate. The sense of safety that law enforcement is meant to provide can instead be threatening&to those... most often targeted with excessive force and/or without reason." The organizers therefore announced that they will ban corrections and law enforcement exhibitors at NYC Pride until 2025.

In hearing the cries to defund the police, NYC Pride is doing what local governments across the country have been unable to: they are reallocating funds away from police forces with a history of violence, and back into the communities they are a part of. NYC Pride is looking to fill the roles usually occupied by the New York Police Department with trained volunteers, community leaders, and private security.

Not only is NYC Pride eliminating NYPD's involvement in the parade and related events but it is also elevating the voices of BIPOC queer activists. The statement released by NYC Pride continues: "The dedicated QPOC [Queer People of Color] contingent of the NYC Pride March will be prominently featured this year and in future years thereafter. NYC Pride will also commit to increasing Black-led, Black-centered partnerships and establishing long-term vendor relationships with minority-owned businesses in an effort to uplift queer and BIPOC-centered organizations."

Capitol Hill Pride went on to condemn the Seattle Police Department for continuing to employ six officers who attended the January 6th insurrection in Washington DC, and called for the department to fire them.

The organization also issued a statement regarding past controversies with the SPD, writing, "Capitol Hill Pride was offended in 2015 that three officers did not escort a disruptive group out of the festival but instead posed with an open-carry group and filed an OPA [sic]. Capitol Hill Pride is still requesting the identities of the three officers."

Groups that are not fully willing to support and protect all members of the LGBTQ community, it seems, will not be welcome at Pride anytime soon.

CHOP and the police It may not come as much of a shock that Capitol Hill Pride followed NYC Pride's decision to ban police. Seattle, after all, has been known for its anti-establishment energy. It was one of the first cities to implement a practice of anti-police community engagement when on June 8, 2020, the Capitol Hill Autonomous Zone (CHAZ, aka CHOP) was born.

Lasting nearly one month, the zone included six city blocks and Cal Anderson Park, appearing in response to claims that the Seattle Police Department was exercising blatant hypocrisy by using excessive violence and force with Black Lives Matter protesters but allowing counter-protesters to go so far as to drive a car into the crowds of people and fire shots, one of which hit a protester near 11th Avenue and Pine Street.

Following the style of successful modern movements, CHOP was leaderless. Run by the people, it advocated for three main changes: the reduction of Seattle's police department budget, from a whopping $409 million to $200 million; a reallocation of the remaining $209 million to community programs, particularly ones that serve historically Black communities; and impunity for all protesters involved in CHOP.

In the end, the demands made by CHOP protesters were not met, and the zone was ultimately taken back by police within a month. The impact of Seattle's activists, however, did continue to live on in the Pacific Northwest, inspiring many in Portland to continue calling police out for blatant hypocrisy, and making similar demands to cut budgets and reallocate funds to community programs.

Excluding police from Pride for the next four years is a bold statement, one reminiscent of the actions taken by Seattle CHOP activists. While NYC Pride is now facing backlash from supporters of the police, as well as Queer officers, waves of encouragement are also being heard across the country, and Seattle's support is a sign of that.

Many QPOC activists are calling on their own communities to follow along with Seattle and New York. One can be hopeful that a community as bold as Seattle, and as committed to social justice, can take the steps to provide a safer Pride experience for Trans and BIPOC members of the LGBTQ+ community, and excluding the SPD is a great first step.