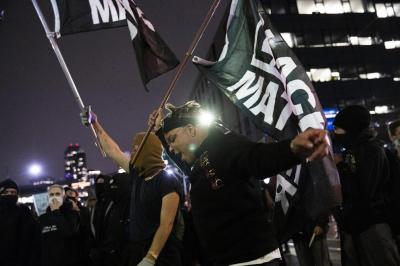 On July 25, 2020, journalist Renee Raketty was doing what she has done for years: covering groundbreaking, historically important events in the Seattle area.

On this particular day, Raketty was reporting for the Seattle Gay News on one of the many protests following George Floyd's death at the hands of police on May 25, an event that rocked the nation and the world and spotlighted America's ever-present issues of racism and inequality. Tensions were especially high in Seattle due to the deployment of federal officers by the Trump administration.

While a significant crowd of protesters gathered and clashed with police on 11th Avenue in Capitol Hill, Raketty spotted a nearby fire escape where she could take photos and videos of the scene below. In order to get there, Raketty had to show her press pass to police, and they let her proceed.

From her position on the fire escape, Raketty was quietly taking photos and videos of the event. In a video that she posted to her Facebook page, you can see an officer ride over on his bicycle and park it, walk over toward where Raketty was sitting, and check to make sure no one was looking. Then you see him throw a blast ball, underhand, in her direction. It went off underneath where she was sitting.

According to an article written by Margo Vansynghel, when a blast ball is set off, there is a "thunderous, heart-pounding bang and bright flash" and then the release of a "disorienting cloud of pepper spray or tear gas into the air."

Raketty still suffers from injuries that she received that day, including hearing loss in her right ear and an injury to her right knee that she sustained when attempting to quickly turn away from the impact.

At this point, Raketty has received no compensation for her medical bills resulting from her injuries from the blast ball.

But her injuries go beyond just the physical. As Raketty said, "This has messed me up emotionally. I've had PTSD, having to constantly [relive] what happened."

Lawsuits
Since the event, Raketty has filed a declaration in an ACLU lawsuit that argues that the Seattle Police Department "repeatedly targeted journalists with brutal violence" on July 25. Since then, the court has barred police from using projectiles and chemical irritants to target members of the press.

Raketty is also currently involved in a civil lawsuit, brought by protesters, their families, and journalists. Superior Court Judge Judith Ramseyer ruled in February against the City of Seattle's attempt to dismiss the suit. In March, Judge Ramseyer also ruled against King County's attempt to dismiss its liability.

Because of these rulings, the lawsuit will move forward, with the next steps being for the plaintiffs (including Raketty) to make their arguments before a judge and/or jury to determine the extent of the defendants' liabilities and potential damages.

Raketty's decision to involve herself in these lawsuits has been a difficult one. While she believes in accountability for Seattle police, her involvement in these cases has ultimately taken a lot of energy. Raketty said, "I'm conflicted, because I was deeply impacted. But at the same time, I have a job to do as a journalist and a life to live."

Since the event, the Office of Police Accountability has conducted an investigation and found the accusation to be "unfounded," meaning it sided with the officer, but "inconclusive," meaning that it can't prove if the officer acted maliciously.

According to Raketty, her attorney has been asking for bodycam footage from the SPD since September. They did release some footage, but Raketty believes they only released the portions of the video that fit their narrative. The other footage would be helpful not only for her civil case, but also for herself. "If I can't see what happened from beginning to end, it is impossible for me to have closure," she said.

Professionalism, police pay, and the press
What Raketty saw on July 25 and experienced leading up to that event in the early days of the protests was upsetting to her, as she witnessed what she called "the militarization of Seattle."

She said, "As a citizen of Seattle, I expect professional conduct from the police."

As a taxpayer who helps pay for the local police department, she is frustrated that her money has funded instances like this. She said, "It feels awkward - I'm paying for my own injuries."

This is especially frustrating to Raketty and others, because of how much Seattle police are paid. According to a 2020 article by the Seattle Times, the SPD had an overall annual budget of $409 million, with over 80% spent on employee compensation; 374 SPD employees made at least $200,000 in 2019.

Although this experience has been both physically and emotionally difficult for Raketty, she has learned some important lessons from it. She said, "It's okay to come forward and speak out when something is wrong."

She hopes that telling her story will help lead to systemic and long-term change in the Seattle Police Depatment.

This instance and others have reminded her of the important role that the press plays in holding those in authority accountable. She said, "Whether they are our community leaders, police officers, or members of our government, it is important that we [as members of the press] continue to hold them accountable and to make sure they act professionally."

Renee Raketty is a working writer and photojournalist, and a contributing writer at Unite Seattle Magazine, the Seattle Gay News, Capitol Hill Seattle, and the Tacoma Weekly. She is also the field producer for Malcontent News, where she contributes content to MalcontentNews.com, social media, and the tri-weekly Happy Hour live broadcast.