A history of medical nightmares 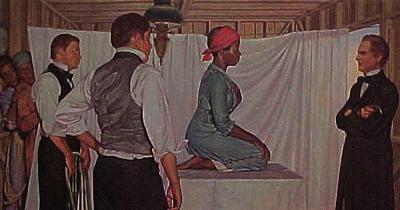 It is 2021 and we are experiencing a health crisis. A pandemic has spread across our country and the world, affecting civilizations in a myriad ways. COVID-19 has spent over a year imposing new restrictions on the lives of millions.

Recently, vaccines have been created to defend against it. While this seems like a victory, studies show that they can only effectively produce "community immunity" if 70% of our country's population agree to take the vaccines.

While 68% of whites are reported to be willing to receive vaccinations, 60% of blacks are said to want to refuse. Many may ask why the Black community is so against receiving these vaccines, but the answers are deeply rooted in American history.

In 1875, surgeon James Marion Sims, MD, was elected president of the American Medical Association. Although this gynecologic surgeon is said to have cured many women of "insanity," epilepsy, and "hysteria" by removing their ovaries or parts of their clitoris, his praises depend on the color of the women you ask - or the men who had them committed for surgery.

A Black woman named Betsey was just one of many slave women Dr. Sims intentionally addicted to morphine to enable the performance of these painful vaginal surgeries. Only after years of torturous experimentation did Sims venture into curing wealthy white women and win the acclaim he is famous for.

This, however, was far from the end of the brutal, inhumane medical injustices suffered by the Black community. In 1932, under the guise of free medical care, 600 Black men enrolled in a program run by the Tuskegee Institute and the Public Health Service. This unethical study was performed without informed consent. Researchers told the men they were being treated for "bad blood," a local term that was used for a number of different ailments, including syphilis.

In actuality, none of the men received proper treatment for the disease more than half of them had contracted in an experiment officially named "the Tuskegee Study of Untreated Syphilis in the Negro Male," even though penicillin could be used to cure the disease. It took 40 years for the experiment to be shut down for unethical practices, a tragedy that unnecessarily allowed these men to infect their Black wives and children with this curable yet life-threatening disease.

Then, in 1951 Henrietta Lacks, a young, Black mother of five, was diagnosed with cervical cancer by renowned gynecologist Dr. Howard Jones. The Johns Hopkins Hospital that she received her treatment at was one of very few that provided treatment to Blacks at the time, and they also allowed for a sample of her cells to be sent to Dr. George Gey's nearby lab. It was Dr. Gey who realized that Henrietta's cells were unlike any other the world had ever seen. Most cell samples died quickly at his lab, but Mrs. Lacks' cells doubled every 20-24 hours.

These cells have since been used to study the effects of drugs, hormones, and viruses on cancer cells, as well as the effects of radiation and poisons on the human genome, without experimenting on humans. Mrs. Lacks' immortal cells have played a crucial role in learning about cancer, viruses, and developing the vaccine for polio, all without the consent of her or her family after her death. To this day, none of the companies that profited from her cells have given any money back to her family.

Unfortunately, the injustices in the medical system against the Black community still do not end there. Death rates, generally speaking and in relation to a multitude of diseases, are disproportionate among Black people and can be attributed to inconsistencies in the care given to white patients versus that given to Blacks.

For instance, in 1980, Black women were considered to be at a lower risk for breast cancer than white women. It is documented that the risk of developing breast cancer was 10 in 100 for white women born that year while it was 7 in 100 for Black women. Yet Black women still manage to have a higher mortality rate for this disease. Eighty-six percent of white women are still alive five years after being diagnosed with breast cancer, but only 71% of Black women survive that long, making them over twice as likely to die from it.

These numbers are reflected across many illnesses, including diabetes, heart disease, prostate and lung cancer, and HIV/AIDS. Blacks are at higher risk, not because of genetic susceptibility but because they are less likely to receive proper screenings, aggressive treatments, or necessary organ transplants.

Medical Apartheid: The Dark History of Medical Experimentation on Black Americans from Colonial Times to the Present by Harriet A. Washington brings awareness to the distorted quality of treatment for members of the Black community, as well as how the benefits of informed consent have been "only haphazardly met, if at all, when the subjects are African American."

When you include the history of higher death rates for Black mothers and their infants compared to that of white counterparts, it is not hard to see where the distrust of the medical establishment comes from. American history has a trail of Black bodies attached to its medical advancements that will require acknowledgment and atonement before trust can be regained.

As a community, we all need to be able to trust that the care we are receiving is always in the best interests of each patient's needs, and progress for the sake of progress does not excuse cruel and unusual practices.