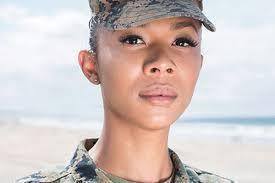 Transgender US Navy Corpsman Akira Wyatt rises at 6 a.m. at Camp Pendleton each day to see sailors and marines for sick calls, and today she does so a little easier.

President Biden on Jan. 25 signed an executive order rescinding the Trump administration's ban on trans individuals being able to enlist or openly serve in the military.

The ban was in response to former President Trump's July 26, 2017, tweets prohibiting "transgender individuals to serve in any capacity in the US military." But Wyatt and others who had transitioned prior to the ban going into effect in April 2019 continued to serve in silence while others like them were prevented from enlisting or receiving transitional care. And some, like Wyatt, also served in critical medical roles during the global coronavirus crisis.

When she heard the ban had been lifted, the 29-year-old Black Filipina woman said she felt "like when Mario hits the mushroom and goes up a level."

"President Biden's restoration of open service recognizes transgender service members as an integral part of our military and closes a dark chapter of history," said Emma Shinn, a Marine Corps captain and president of SPART*A, an organization supporting trans service members, in a joint statement with the Modern Military Association of America. "I am elated that the approximately 15,000 transgender service members proudly serving across the globe can rest easier, knowing that their service to our nation is seen [and] valued and that they can continue to serve as their authentic selves."

Wyatt told the Washington Blade she was also happy to see the US elect a Black woman of South Asian descent born to immigrants like herself. On that day, even before the ban had been lifted, she sat back with her cup of coffee and "felt like a boss."

"I had my Keurig and I sipped it," Wyatt laughed happily while recalling the moment she learned Kamala Harris had become the next vice president. "I shall embody her, I shall be her, and this morning shall be boss!"

Wyatt and Army Staff Sgts. Allyn Cropper and Keishaun Lowery are all active-duty service members who also identify as trans people of color. They each recalled feeling anxiety not only during the four years of the ban but also during last summer's racial unrest and the US Capitol insurrection on Jan. 6 in which former service members and white supremacists were reported to have taken part.

But the election of the first Black vice president of Asian descent and the Senate confirmation of retired Army Gen. Lloyd Austin, III, as the first Black secretary of defense, made them feel hopeful again for the future.

Austin on Feb. 5 signed the Department of Defense Instruction 1325.06, "Handling Dissident and Protest Activities Among Members of the Armed Forces," directing commanding officers and supervisors to discuss extremism in the ranks during a one-day "stand-down," according to a Pentagon press release.

Wyatt's unit responded on Feb. 11 by holding an open forum on race where she and her co-workers shared with peers what life was like for them. Wyatt said many women service members and service members of color were happy to have a new defense secretary and vice president who represents them, but she said others seemed to need justification for why diverse leaders "deserved to be there" in high positions. Wyatt said it seemed as if their leadership positions were unearned.

Still, she was glad for the opportunity and the discussion brought on by more inclusive senior leadership.

"I see this now as progress. We're growing as a country," said Cropper, who self-identifies as a 32-year-old Black man of trans experience. "Now we have a leader who is choosing to see the needs of the people and he is addressing them. And I think that says a lot that it's not even a hundred days (for him in office) yet."

Cropper met Biden at the Democratic presidential debate on June 27, 2019, in Miami, where the future president shook his hand and said, "I see you." He also met [new] Transportation Secretary Pete Buttigieg, who commended him on his military service as a prior service member himself.

While driving to a routine doctor's appointment on Feb. 11 and doing "just regular everyday life stuff," Cropper told the Blade of the hope he feels now that Trump's trans service member ban is now behind him.

"There's always going to be something, I mean, I'm Black and I'm in the military," Cropper said. "But this is now one less thing off my shoulders that I have to worry about."

Instead, he can try to relax and just focus on caring for his partner, his l6-year-old cousin, his two miniature schnauzers Seoul and Carlito, and his Staffordshire terrier Siri.

"Reversing this ban is a victory for all Americans," said SPART*A Vice President Bree Fram, who is a lieutenant colonel in the US Air Force, in the Jan. 25 joint statement. "President Biden has given the gift of opportunity to thousands of individuals who will use it to serve the country they love."

Since first enlisting in 2008, Cropper had served under varying policies limiting how he expressed his LGBTQ identity, including the repealed "Don't Ask, Don't Tell" policy that banned openly lesbian, gay, and bisexual service members.

Despite these restrictions, he still earned several military awards and honors, including one for physical fitness.

"A lot of times the physical aspect of military service is brought up with trans service members," Cropper said while pointing out he and others like him not only met the physical standards but exceeded them. "To be a master fitness trainer, you have to score in the 90th percentile in every event."

Lowery, who also identifies as a Black trans-masculine service member, told the Blade that being able to serve openly also affects leadership skills.

Lowery currently lives with his wife, daughter, and two Great Danes, but he grew up "pretty poor" and joined the Army in search of a better life.

While Cropper came from a family of professionals, including a mother who is a doctor of internal medicine, and wanted to prove that he could make it on his own, Lowery struggled with work, school and long bus commutes before finally signing up in 2007.

Lowery also recalled being a "tomboy raised in a Pentecostal world" who wore basketball shorts for the "sheer comfort." He didn't know what being trans was in those days, but he knew being himself meant being masculine.

"It was a way of life," he said, one that he couldn't live openly under the ban. "Medical professionals didn't have the resources to assist you."

He also described troubles not with peers or subordinates but with senior leaders who didn't know how to handle his decision to transition.

While updating his military paperwork and taking Zoom college classes from home, Lowery told the Blade about a major under whom he served during the ban who told the team he led that they didn't have to use his correct pronouns, that "the regulations don't force us to."

"You can call him whatever you want legally," Lowery said, recalling the major's words. "You're not going to get into trouble."

Currently, Lowery is taking classes so he can one day go to law school and help others who find their lives limited by discriminatory laws and policies like his was. He wants to study family and human rights law because "we need more people influencing policies who are actually impacted by them."

Both Cropper and Lowery also spoke of their identities as Black men serving during the 2020 Black Lives Matter protests.

"I had emotions that overtook me when it came down to those protests," Cropper said. "I felt every single part of my identity was under attack last year. I couldn't be Black enough, I couldn't be trans enough, and I couldn't be valued as a soldier which I gave up over a decade of my life becoming."

But he looked to the differences between Biden and Trump and saw a chance for growth and opportunity.

"The Armed Service now is more reflective of America," Cropper said. "Now, we're saying to more people, you are valued and you, too, can serve your country."

Still, Lowery was a little more pragmatic. He questioned how even senior leaders with good intentions, but working all the way in DC, could really impact the lives of individual soldiers of color in isolated, rural areas like Kansas. He pointed out that sometimes well-meaning changes to improve troop morale were too superficial to help isolated Black, Latino, LGBTQ, or other soldiers from diverse backgrounds who were longing for community, family, and acceptance.

So for now, Lowery continues his pre-law studies, Cropper continues to work hard to advance his military career, and Wyatt continues to spend precious time with her new husband when not rising early for sick call duties.

"Me and my (trans) sisters have this saying," Wyatt said. "That your courage is your crown, so wear it to the T."

Reprinted from the Washington Blade