2020: A year in review for Seattle's LGBTQIA+ community 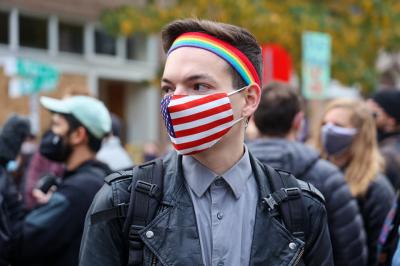 2020. I'm eager to turn the page not because I believe all the hype that 2021 will make everything better for my community or myself, but because with the new year comes new hope.

Here, I reflect back on 2020. I don't intend to cover everything that happened and, clearly, I'm going to miss a lot. I don't even care to talk about the very thing that I have become known for writing about, the Black Lives Matter movement and the protests. Nor, do I wish to reflect on the COVID-19 pandemic. These are two topics that bring me great anxiety and, honestly, I could write small books about.

The Black Lives Matter movement in the wake of the death of George Floyd last May was the largest in United States history and included protests in every state, including the District of Columbia. Here in Seattle, we remember the dates that resulted in violence, property damage and police abuses. I myself was attacked by a Seattle Police Department officer on July 25, 2020. I now understand the need for police reform and accountability. However, the reality is that the local events, which drew the ire of President Donald J. Trump and Fox News, were mostly peaceful transformative experiences for most Seattlites.

COVID-19 also upended everything about our world as we know it here in Seattle. In addition to the lock-downs and economic ramifications, we had to confront the growing issues of health and social inequalities. We watched as the SPD swept unhoused individuals from Cal Anderson Park on multiple occasions. Where do they go when shelters are closed to new admissions. However, the presence of the unhoused and the impact of the ongoing pandemic have brought some Capitol Hill businesses and residents to a breaking point.

These are issues well known to all of us.

Instead, I intend to focus on the moments that affected the local LGBTQIA+ community and myself. I begin with the most hopeful development this year, which also came at the tail end of 2020. Who can forget the Pike and Pine corridor on Capitol Hill after the news networks finally called the election for Joe Biden. The streets turned into a block party all day. The Lesbian, Gay, Bisexual and Transgender community came out strong during the election. The National Election Pool exit poll conducted by Edison Research shows that we accounted for 7% of the total electorate despite making up only 4.5% of the general population. Locally, Seattle Pride and Drag Out The Vote helped to drive up participation while the Seattle Metropolitan Elections Committee (SEAMEC) provided rankings of the candidates for the LGBTQIA+ community.

The dark days of the Trump administration will soon be behind us. The last four years saw a dramatic expansion of discriminatory anti-LGBTQIA+ policies that targeted us. Sexual orientation and gender identity nondiscrimination provisions in health care, employment, and housing. Gone. "Religious discrimination" policies arrived and with it& a license to discriminate against us. Even restrictions on asylum seekers in the U.S. resulted in too many fleeing anti-LGBTQIA+ violence to be left at the border gate.

2020 also introduced us to presidential candidate Mayor Pete Buttigieg from South Bend, Indiana. The Rhodes scholar who had gone to Harvard and Oxford, and spoke too many languages for me to recall, helped to "normalize" the idea of a presidential candidate who just so happened to be gay. Now, his profile will continue to rise as the Secretary of Transportation in the Biden administration. He will be the first out Gay cabinet member in U.S. history.

In Olympia, it was a great year for the LGBTQIA+ community. Laurie Jinkins became the first out Lesbian to become Speaker of the House last January. The Nikki Kuhnhausen Act, banning the use of the panic defenses to justify violent assaults against LGBTQIA+ people became law. The bill was named after a young transwoman murdered in Clark County and in a year that saw the most violent deaths recorded of transgender individuals - according to the Human Rights Campaign.

Likewise, a bill mandating comprehensive and inclusive sex education in public schools was passed by both the Legislature and Washington voters. It took effect earlier this month.

To top it all off, Governor Jay Inslee appointed Justice Helen Whitener, the first black LGBTQIA+ judge in Washington state, to the Washington State Supreme Court. She won election to retain her position in November.

In Seattle, the news was equally good for students. The Seattle School Board voted unanimously to enact a resolution "Affirming Inclusion of Our LGBTQIA+ Students, Staff and Community." The resolution would affect everything from new construction, classroom curriculum and result in the renaming of a school in honor of an LGBTQIA+ individual in the state's largest school district. The district also released a first-of-its-kind photobook by acclaimed photographer Nate Gowdy, entitled: "Our Students, Their Stories." It highlights the stories of LGBTQIA+ students and school staff.

Despite the occasional rumors about how fragmented the LGBTQIA+ community has become, 2020 was another example of how our community comes together. A GoFundMe campaign saved the popular Lesbian bar, Wild Rose, from closure and similar efforts have sprung up to help the Seattle Gay News and Neighbours Nightclub. Of course, there was no greater example of the unity of the LGBTQIA+ community than all the virtual events that sprang up during the COVID-19 pandemic.

Seattle's "Together for Pride" virtual Pride weekend drew 3,300 average viewers per day over the three-day event and included Trans Pride on Friday, PrideFest on Saturday and Seattle Pride on Sunday. The producers of the three events, Gender Justice League, PrideFest and Seattle Out and Proud combined their efforts this year to bring the workshops, performances and presentations to the local LGBTQIA+ masses. The Dyke March also held its March and Rally online. Even the Seattle Queer Film Festival celebrated its 25th anniversary virtually, delivering 40+ programs over 11 days online.

We even helped to "Queer the Census," with local LGBTQIA+ enumerators canvassing all over the city. LGBTQIA+ Allyship, Equal Rights Washington and Seattle Gay News were among the organizations leading to get every individual in the LGBTQIA+ community counted. The Census determines funding, the allocation of congressional seats, and gathers household demographics.

The community also rallied in support of Kennedy Catholic High School teachers Paul Danforth and Michelle Beattie, who were forced to resign their positions after becoming engaged to their respective partners. The LGBTQIA+ community, students and faculty as well as many residents of Burien, WA, protested outside the Catholic Archdiocese of Seattle and joined students who held walk-outs and sit-ins.

Seattle LGBTQIA+ organizations and individuals opened their wallets this year& big time. The Seattle Foundation and Seattle Out & Proud (also known as "Seattle Pride") also gave money to Lambert House, a drop-in center for LGBTQIA+ youth. The organization successfully took its efforts online - providing a lifeline to LGBTQIA+ youth through virtual support groups and a list of resources.

Seattle Out & Proud also assisted other organizations in the region who provided on-the-ground COVID-19 support services. Twice each year, Seattle Pride awards grants to charitable organizations that support the local LGBTQIA+ community, since 2017.

A pandemic couldn't keep Gay City from celebrating its 25th anniversary. Gay City was born at the height of the HIV/AIDS crisis and started as a series of public forums. Today, Gay City has its own community center, library and coffee shop. The "Gay City model" has been replicated in more than 80 cities around the world.

COVID-19 initially brought the arts and entertainment scene to a halt, but it bounced back albeit mostly online. Seattle Men's Chorus and Seattle Women's Chorus were among those to suspend their 2019-2020 Season. The University Bookstore and Elliott Bay Book Company, home to many LGBTQIA+ book readings, had to temporarily close their doors and are now operating under limited capacity. The much beloved Seattle Opera had to cancel its La Bohème performances in May and announced employee furloughs in March. However, the Seattle Opera caught a break in the form of a $2.3 million loan under the federal Payroll Protection Program. Unfortunately, the popular watering hole and arts venue, The Palace Theater & Art Bar, did not survive the pandemic.

The end of 2020 will bring many transitions, too. GSBA President & CEO Louise Chernin, who has held the position for 19 years, announced she is retiring after 28 years of service to the organization. The Greater Seattle Business Association is Seattle's LGBTQIA+ chamber of commerce.

Seattle also lost many pioneers and community leaders this year. 2020 was particularly hard on the SGN staff, who mourned the loss of three colleagues and friends.

The community began the year mourning the loss of former Seattle Gay News Associate Editor Shaun Knittel who passed on December 30, 2019. He was 39 years old.

In addition, SGN publisher and LGBTQIA+ civil rights leader, George Bakan, passed away on June 7, 2020. He was 78 years old.

Finally, columnist and LGBTQIA+ civil rights pioneer, Roger Winters, passed away on November 15, 2020. He was 75-years-old.

Notable LGBTQIA+ deaths in Seattle include Martin Gouterman, a beloved University of Washington professor who is best known for his contributions to science, including his "four-orbital model." He was openly gay in an era when few scientists were. He died on Feb. 22 at the age of 88.

Jack Anderson, a psychologist and former board member of the Dorian Group, an early LGBTQIA+ rights organization in Seattle, passed away at age 84. He also was a leader in the effort to address the growing HIV/AIDS crisis, holding a first-of-its-kind public presentation and providing consultation services to the King County AIDS Prevention Project. He even worked with Country Doctor to buy one of his buildings for the expansion of their Dental Clinic, serving a low-income population.

Personally, I will not forget Summer Taylor who was killed in the early morning hours of July 4, during a Black Femme March while it stopped on lanes of I-5. They were only 24. A driver, later identified as Dawit Kelete, plowed through the demonstrators as they were dancing the Cupid Shuffle on the roadway. I covered the Washington State Patrol press conference and photographed the scene for the SGN only hours after the incident.

While COVID-19 and the Black Lives Matter movement - their impact on Seattle - will likely eclipse the events I have written about above. I wish to enter this into the official record as being among the other events that should not be forgotten.