The Multiplicity of Oppressions 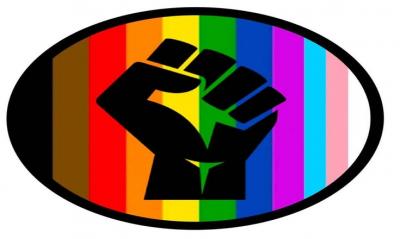 This month has stirred up some very mixed emotions within me, and I have found myself spending an inordinate amount of time trying to sift through and make sense of them. I am a Queer Person of Color who is also an essential worker, so I have been feeling some type of way about all the prominent events and circumstances that this month has offered up.

We are in the midst of a global pandemic that has put essential workers like me on the front lines of the areas most impacted (I've seen some things, y'all), it is PRIDE month, sexual orientation and gender identity are finally federally protected against discrimination and termination in the workplace (woot!), kids are graduating from high schools, colleges, and universities they haven't even stepped foot in for months, George Floyd's sickening murder has rocked and polarized our nation, and the Black Lives Matter (BLM) movement and its affiliated worldwide protests have taken up much of my attention and emotional and tangible labor. Oh, and everything is cancelled. Like, everything. Wow. I guess cancel culture had the right idea all along, go figure.

Add Juneteenth to the equation, and we have a unique convergence of historic events that make this one hell of a month to be alive.

For those of you that don't know (and how could you, no one talks about it), this Juneteenth marks the 155th anniversary of the end of slavery, at least the conventional kind. There are, of course, other types of slavery, like the industrial prison complex that enslaves so many people of color, especially Black men.

Juneteenth is not a nationally recognized holiday, although it should be (is it weird that Texas is the only state to make it an official holiday? I think it's weird. Come on, Washington!) Pivotal moments in White history are the only ones we seem to celebrate as a nation. We had no problem celebrating Columbus Day up until recently, even though Columbus was a total prick and slaughtered entire tribes of Natives. Giving the same space to Black people to celebrate their history and heritage would just be asking for it. I mean, they gave us a whole month for Black history, we should be thankful, right? God forbid if we got radical ideas about equality in our heads, organized ourselves, and started an uprising?

Oh, wait, we did anyway, surprise! Congratulations America, you're finally coming around to the realization that Black people might have some validity and worth in our society, and it only took you 500 years to do it. It's what I like to call moving at the speed of White. But hey, part of the nature of privilege is that it doesn't need to move as fast as the non-dominant groups who are used to being marginalized, simply because it knows less threats and has less problems of survival to worry about.

I have written before about what I have dubbed the multiplicity of oppression, and this month has brought it all home for me. The intersectionality of what it means to be Queer, Native, a Black descendant of slaves, an activist, a social worker, a journalist, and poor, have all come together — and come to a head — this month.

Do any of you remember Sept. 2, 2005, when, during a nationally televised telethon benefit for victims of Hurricane Katrina, hip-hop artist Kanye West went off-script to directly criticize the media and the White House's handling of the storm? "I hate the way they portray us in the media," he said. "If you see a black family, it says they're looting. If you see a white family, it says they're searching for food." West went on to say, "George Bush doesn't care about Black people." He may have been calling out only one man and the media, but really, he was speaking to an entire system of premeditated oppression and poisonous portrayal that wants Blacks (and Queers) to go away.

Fifteen years later, that shit has not changed, and if you're both Black and Queer, like me, the weight of the system kneeling on your neck only feels twice as heavy.

What this month has harshly reminded me of is that the fight is not over. The Queer community has gotten used to its parades and its tea dances, but we must remember that there are other marginalized communities still fighting for not only acceptance like the LGBTQ+ community, but also the right to simply be free to pursue their life with the same basic rights and freedoms granted to Whites. The Black struggle has so very much in common with the LGBTQ+ struggle, and it's time we did more than just acknowledge it. We should stand with them and join their fight, too. We may not be able to celebrate PRIDE month in our usual fashion, but we can take it back to our roots, back to the streets, and march for another wildly worthy cause.

Whether you are able to join the Juneteenth and BLM marches, volunteer at the Capitol Hill Organized Protest (formerly known as CHAZ), or something else, get up off your ass and celebrate Black and Brown folx. Because Black and Brown Lives do Matter, and they have been especially important in the Queer community. The first Pride was basically a Queer BLM riot. Without the fighting spirits and voices of Black and Brown folx like Marsha P. Johnson, Bayard Rustin, Sylvia Rivera, Barbara Smith, and others, we would not be free to have our parades in the first place. If you aren't already familiar with them, you should be. FYI, the founding members of the Black Lives Matter movement are Queer Black women. Google it.

Marsha P. Johnson once said, "As long as gay people don't have their rights all across America, there's no reason for celebration." I think the same has to be, must be, true for Black and Brown people. We are not free until we are ALL free. So strap on your marching stilettos and get out there with the rest of us. Let's get our brothers and sisters the support they deserve. They showed up for us when we needed them, now it's time to return the favor.