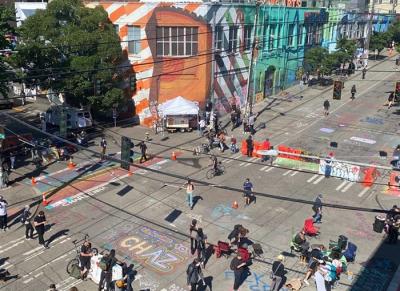 As the small business voice of Capitol Hill and the LGBTQ community, we write in solidarity with other community voices to express our deep concern that the events of the last weeks have put at risk the health and safety of the community.

The murder of countless black and brown people at the hands of the police must stop. We stand with the Black Lives Matter movement and other community voices here in Seattle on the need to address racism in all its forms.

As the small business voice of Capitol Hill and the LGBTQ community, we believe Capitol Hill should be a safe place for residents, for small business owners, and for individuals to peacefully protest. The management by City Hall and the actions we have observed by the Seattle Police Department have created an environment that is hostile to free speech and the rights of the public to express themselves through peaceful protest.

The GSBA is Washington's LGBTQ and allied chamber of commerce, founded on Capitol Hill in 1981 and representing 1,400 small businesses in Washington, including hundreds in Seattle. The GSBA has a long history of fighting for economic empowerment and social justice. The Capitol Hill Business Alliance is a program of the GSBA and is the business voice for the neighborhood. Many of our members have been risking their health and safety to support the protests against police violence because standing with their communities is what they do. In the middle of a pandemic and unprecedented economic crisis, they have seen it as their duty to open their doors and provide food, water, medical supplies, restrooms, and other needed amenities. And in return, many in the community feel betrayed and unsafe due to the reaction by the Seattle Police Department.

Watching the epicenter of the confrontation between protesters and police this weekend take place on the rainbow crosswalks in the center of our LGBTQ community's historic neighborhood on the start of Pride was particularly painful. The origins of Pride for the LGBTQ community are rooted in protests against police brutality, whether at the Stonewall Inn, Compton's Cafeteria, or the extortion and harassment of early LGBTQ spaces in Pioneer Square for most of the twentieth century. LGBTQ people of color have been at the center of these movements from the beginning. From our perspective, there is no way to separate the fight for LGBTQ rights from the fights for the rights of black, brown, and indigenous people.

The GSBA has long supported community-based efforts to reform the Seattle Police Department. What the events of the last week have made clear is that the institution needs deep and meaningful changes to its systems, policies, and culture. We ask that you act quickly and decisively to deescalate the tensions on Capitol Hill and across Seattle so that we can again feel safe on Capitol Hill and protesters can exercise their first amendment rights. The City must make every effort necessary to reach consensus with the community to eliminate biased policing, and we ask that you listen closely to the voices of our communities.

We join with many others who have come before us advocating the following actions as a start to remedy these harms and the significant loss of goodwill and trust between the community, its local leaders, and its police department:

" Cease all actions against peaceful protesters, including physical attacks, arrests, prosecution, and incarceration.

" Prohibit the use of any gas, flash-bang grenades, rubber bullets, and other violent methods against protesters.

" End forcing downtown protests up into Capitol Hill, allow protesters to peaceably walk and gather on streets and sidewalks as they choose, especially during these times when there is minimal obstruction of traffic or other activities.

" Prohibit any obstruction of badge numbers by officers, for any reason.

" Have an experienced incident commander who is visible throughout the demonstrations, speaking with and regularly updating community, businesses, the media, and all those watching who are trying to get accurate, timely, and consistent information.

" Ensure that SPOG and SPMA contracts live up to the promises made to the community that reforms recommended by the Community Police Commission in 2014 and in the 2017 accountability reform law will be fully enacted.

" Follow through on all other requirements from the 2017 law that did not need to await contractual changes and on any other recommendations for reform from years of civilian oversight working in collaboration with community that are still not implemented.

" Begin serious efforts to demilitarize the SPD (equipment, training, and behavior) and redirect SPD funding where a law enforcement approach is not serving our communities, reinvesting in other approaches, and in addressing other long-standing disparities in services.

The damage done to Capitol Hill, its residents, and its small businesses — as well as the loss of trust and mutual respect between police and the communities they serve — will take a lot of work to restore. We are outraged, frustrated, and disappointed, and we need you to hear our voice and those of the protesters. While our expectations are high, we will help hold City Hall and the Seattle Police Department accountable. The GSBA will continue to work for equality and the dismantling of structural racism working with community partners to make our city safe and allow our communities to thrive.

Courtesy of the GSBA