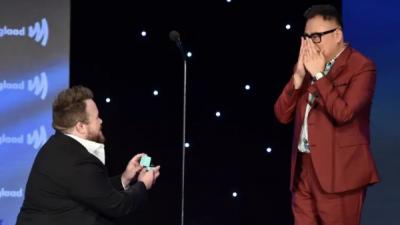 Hulu will be the official streaming partner for the 33rd Annual GLAAD Media Awards, the second consecutive year that Hulu has shared the ceremony on its platform. The GLAAD Media Awards premiere on Hulu on Saturday, April 16, 2022.

Nearly 200 LGBTQ special guests and allies walked the red carpet, many wearing GLAAD's & pin in the colors of the transgender flag. Pins are available at http://glaad.org/pin.

Photos from the Los Angeles ceremony are available here courtesy of Getty Images for GLAAD: https://dam.gettyimages.com/assignments/the-33rd-annual-glaad-media-awards

B-roll footage from the red carpet courtesy of New Vision for GLAAD: https://www.dropbox.com/scl/fo/hhmj34gk2vpsm5722na5r/h?dl=0&rlkey=xzz2xu2s7krtey9s35r4av62i

Jeopardy! Champion Amy Schneider hosted her own version of the show on the GLAAD stage with Drag Queen contestants Bob the Drag Queen, Shangela, and Eureka.

GLAAD presented awards in four categories onstage. Other categories were also announced. A full list is below:

During the ceremony, GLAAD also announced the winners of select GLAAD Media Awards categories off-stage and on social media. Remaining winners for select categories will be announced at GLAAD's New York Ceremony on Friday, May 6.

The full list of announced winners thus far can be found below:

Select quotes from the 33rd Annual GLAAD Media Awards can be found below:

Upon presenting the award and on Rodriguez's honor, Andrew Garfield stated: "Through her art and her energy, Michaela Jaé is making the world respect Black women, Latinas, and all women as we should. In a moment of reckoning for our industry, she is leading the charge to create and produce stories centered on LGBTQ lives and experiences, particularly those of trans women of color. She reminds us that you can't just say you're an ally. Allyship means action. She inspires me to love others as boldly as I can."

Upon acceptance of the award, Michaela Jaé Rodriguez stated: "I have to thank my mother and father for seeing me and loving me. When a child is loved, whether you are LGBTQIA or not, it makes all the difference. When you tell your queer child that you love them, they think, 'I love me too.' I thank all the parents in Texas, Florida, Idaho, Arizona, and around the world who are standing up to fear and ignorance, and grounding their LGBTQIA children in love and acceptance."

Upon acceptance of the Vanguard Award from Ben Platt, Kacey Musgraves stated: "One of the biggest compliments I've ever gotten in regards to my career is a gay country fan telling me they heard my music and finally felt invited to a party they'd never got invited to.I will continue to have your backs and I so dearly appreciate you having mine."

Kacey Musgraves surprised audiences with a performance of "Rainbow," dedicated to LGBTQ community.

GLAAD President and CEO Sarah Kate Ellis was introduced by JoJo Siwa, and called for action from Hollywood: "In this moment of crisis, what's different is our community is holding companies accountable. So I have a message for the industry: Don't wait until you're in the hot seat. There's no more time to sit on the sidelines. We need Hollywood on the front lines, fighting for our rights and telling our stories.

GLAAD is calling on Hollywood to take meaningful action and will soon convene the biggest brands, agencies, studios, and streamers together with two goals: 1, to commit to improving the quantity, quality, and diversity of LGBTQ images — especially in kids and family programming; and 2, to speak out against anti-LGBTQ legislation in favor of rights like the Equality Act. I expect every industry executive in this room to join us. GLAAD will give you the playbook. But we won't give you a pass."

The nominees for the 33rd Annual GLAAD Media Awards were published, released, or broadcast between January 1, 2021 and December 31, 2021. For a full list of nominees, click here.