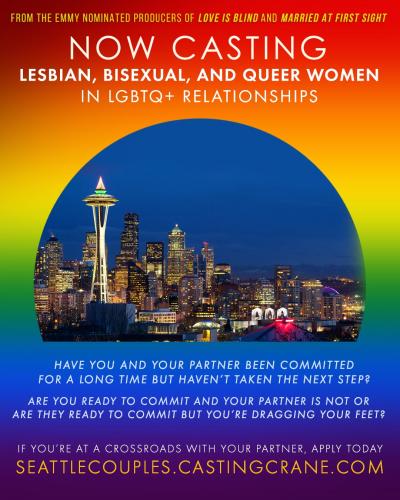 It seems like the world goes crazy for reality dating television shows. Although these stories of drama, romance, and heartbreak seem to capture large fan bases, they are often missing something: inclusivity and clarity.

Which is why Stephanie Lewis, lead casting producer with Kinetic Content, is excited to start a new, currently unnamed project, focusing on Queer women and their relationships. As Lewis said, "Representation matters; it really does."

This new unscripted show hopes to steer clear of the confusion-inducing, drama-fueled reputation of reality television shows, focusing instead on providing clarity and hope to real people and real couples.

The project, from the Emmy-nominated producers of Love Is Blind and Married at First Sight, is currently looking for Lesbian, Bisexual, and Queer women in LGBTQ+ relationships, living in California, the Pacific Northwest, and Vancouver, Canada. Lewis believes that Kinetic Content will find the couples they need on the West Coast due to the "pockets of queer women that belong to the great gay-friendly communities" in this area, including members of the Seattle LGBTQ+ community.

The producers are looking specifically for Queer women at a crossroads in their relationship, such as when one is ready for marriage and commitment, while the other is still dragging her feet. Lewis said, "We want to show that queer relationships are just as interesting, dynamic, and full of layers as any heterosexual relationship is."

Show concept
After a couple applies and is chosen for the show, they will arrive at the film location and meet the other couples. After that, they will spend one last night together.

The next day they will live for three weeks with another Queer woman who isn't their partner. This will serve as a "trial marriage," which is meant to help them gain perspective on their own relationship, giving cast members a chance to ask and answer questions such as "Is the grass actually greener on the other side?," "Am I marrying the right person?," and "Am I even ready to settle down and live the married life with a partner - forever?" before they walk down the aisle and take part in a lifetime commitment. These are just some of the questions that this show hopes to help couples answer.

After three weeks apart, the couples will return from their "trial marriage" and then turn around and share the same experience, in another location, with their original partner. In the end, it's decision time.

At this point participants might decide that their partner is indeed the right choice for them, or that there might be better matches awaiting them out in the dating world. They will have to make the tough decision to get engaged, go their separate ways, or continue dating. These big decisions that were daunting before may be easier after weeks of contemplation.

Producers of the show recognize that it is normal for people to wonder if someone else might be out there, someone who might make a better match than their current partner - and this show hopes to take the wondering out and replace it with certainty.

As Lewis said, "We hope to create a positive, insightful experience for the cast. An experience that will give them clarity."

The producers believe this show will be enjoyed by people across the sexual-attraction, behavioral, and orientational spectrum. Said Lewis, "I think it is good for everyone to see that queer women go through the same thoughts and issues that straight couples do."

The producers also look forward to bringing to light the interesting and relatable realities of Queer relationships. Lewis believes that this show will give viewers the opportunity to see that Queer women take marriage seriously. She said, "I'm excited for people to see how important marriage is to the gay community and to see that they take it as seriously as any other couple."

Casting and airing information
If you (or someone you know) is a Lesbian, Bisexual, or Queer woman in an LGBTQ+ relationship who is at a crossroads and could use some help finding clarity, Kinetic Content is looking for couples just like you! Casting will be open until mid-June, so there is still time to throw your hat into the ring.

If you're someone who doesn't qualify to participate but would like to watch the show when it comes out, stay tuned. The producers haven't announced an exact air date for the show yet, but when it does come out it, will be featured on a major streaming platform. And when it's ready for viewing, it will be well publicized. So keep your eyes peeled!