[ICYMI] Catching Up with Laura Dreyfuss & Rahne Jones of Netflix's 'The Politician'. 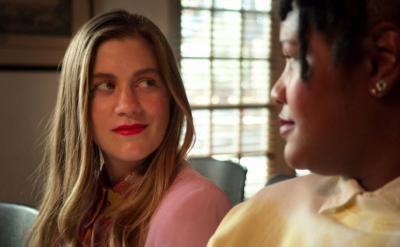 Netflix's much-hyped show, Ryan Murphy's The Politician, matches the political landscape of 2019 and what is to come in 2020, and I recommend it highly. The streaming service's summary puts it well:

"Payton Hobart (Ben Platt), a wealthy student from Santa Barbara, has known since age seven that he's going to be president of the United States. But first, he'll have to navigate the most treacherous political landscape of all: St. Sebastian High School. To get elected student body president, secure a spot at Harvard, and stay on his singular path to success, Payton will have to outsmart his ruthless classmates without sacrificing his own morality and carefully crafted image. Full of comedy and sly satire, The Politician offers a rare glimpse into just what it takes to make a politician."

Last fall, I got to interview two of its stars: Laura Dreyfuss (one of Payton's campaign managers) and Rahne Jones (Payton's opponent's running mate), whose characters start out on opposite sides but are soon revealed as a same-sex couple. I had a chance to sit down and chat with Dreyfuss and Jones while they were on a publicity tour in Seattle.

MK Scott: So what brings you guys to Seattle?

Laura Dreyfuss: Well, we are promoting our wonderful show called The Politician on Netflix!

MKS: Excellent. Now, tell me a little bit about your character, Laura.

Laura: So I'm on Payton's campaign team, and just, like, very intelligent, very strategic, constantly thinking about every outcome to every situation. And I think she just sees Payton as the ticket to the White House. And she really believes in him. It's her plan to get him there.

MKS: Now, Rahne, you're the running mate for River [David Corenswet, as Payton's opponent and ex-boyfriend]. How involved are you in the overall story this season?

Rahne: I think I'm pretty involved. I mean I think that Skye is a person who is, you know, passionate about a lot of things, especially about marginalized communities and giving a voice to the voiceless. And she's going to stop at nothing to get what she wants. And we'll see her making some interesting choices in order to gain that power. But, yeah, I definitely have a lot more to do, once the episodes progress, for sure.

MKS: I understand this was your first acting job.

MKS: And you used to work with the Department of Homeland Security?

Rahne: I did, yeah, for four and a half years.

MKS: So how was the transition from that to acting?

Rahne: Literally night and day. There's no equal. I don't even know the terminology for it: completely different worlds. But I quit that job and then the universe aligned to have this happen, which is surreal.

MKS: Have you guys personally worked with any of the major stars of the show, such as Jessica Lange or Bette Midler?

Rahne: I cried out there.

Laura: Oh, yeah, that was amazing. Yeah, we got to work with Jessica, and that day was amazing. She's such a legend, so it was really, really cool.

MKS: She'll be major in the next season.

Laura: Yeah. It appears that way.

Laura: So it'll be fun, I think that last episode of season one really sets up what you could maybe expect from season two. So those two women interrelate together, and I really am glad to see them.

MKS: So, Laura, you worked with Ben [Platt] in Dear Evan Hansen, so one of the great things about the first episode is that you got to hear him sing. That scene was just absolutely amazing.

MKS: But I'm sure you were there when they were filming that.

Laura: I was, yes. It was the first time I had ever seen Ben sing live [as an audience member]. And I was just, like, he is just... it was a lifetime talent, for sure, watching him perform, and he's just so caught up in the element, and his voice is just beautiful. I was, like, I'm just emotional out here. It was a wonderful experience. Yeah.

MKS: Now, [Laura's] already said that [she] will be part of the season two. How about you, Rahne?

Rahne: Oh yeah, I will be as well.

MKS: Even though they do kind of go into the future there?

Laura: Yeah, we haven't had the script yet.

Rahne: We have no script. We're just on pins and needles. We have our fitting and stuff coming up soon. So, it's like, what are we doing?

MKS: There's the love story between Payton and River. Now, are there going to be any other relationships in the show [besides your characters]?

Laura: I think so.

Laura: I think it's safe to say pretty much everyone dabbles a little.

Rahne: Yeah, for sure.

Laura: I mean, that's the amazing thing about this show, that there's so much clear representation.

Laura: So, yeah, it's also very fluid. Like everyone's very fluid on the show. So that's really exciting, and it kind of represents what I hope the future looks like.

Rahne: Absolutely, yeah. It is what it is.

MKS: Is that pretty much true about what the current generation's going through in regards to the fluidity?

Laura: I think that...because of the fight the older generation has done before us, we're able to...

Laura: ...live in a world where we don't have to be so hard with our labels and we could be a little more fluid and exist within the spectrum of gender and sexual fluidity. So the show does a good job of representing that.

MKS: Now, in regards to the show, there's a lot of truth about it, about the way that a politician actually works, and all the stuff they do. What do you think about what is going on with the current administration?

Laura: Well, I think it's an interesting question. I like how in the show Payton says that he's read every presidential biography starting with Ronald Reagan, because in his reign, Ronald Reagan created the modern presidency. And he used entertainment as a way to draw people in. And so I feel like today we're questioning a lot what is authenticity and what makes a leader tick, and also how much of it is entertainment and how much of it becomes entertainment. And, yeah, so I think that's definitely something you see in the show. It comments on the...

Laura: ...the performative nature of politics. And it's our job as voters and citizens to examine what that means, and what we feel, and why we're voting for somebody, and why we're electing people, and how we measure authenticity.

Rahne: I echo everything that she just said. I mean, as far as the current administration is concerned. I think the show does a good job of not mentioning Donald Trump at all, because I think it's low-hanging fruit. It's easy to latch on to that and ride it. But I think that we're talking about some important things that will affect every citizen. And we do it in a satirical way, but I think it will get people talking even more about what's happening.

MKS: Now, if you weren't doing this, would you be back on Broadway? Would you do it again?

Laura: Yeah, I love theater. Theater is my number one passion. So, yeah, I could always go back to that, yeah.

MKS: How about you, Rahne? If you weren't on this show, what would you be doing?

Rahne: If I wasn't on the show what would I be doing? I think something related to fashion.

Be sure to catch season TWO of The Politician on Netflix.