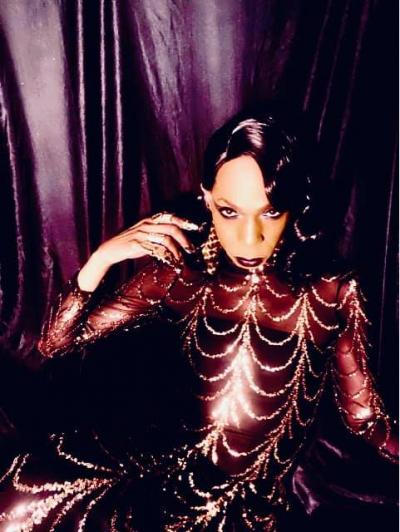 Adé Cônnére is making waves with their performance art. Based in Seattle, they have been performing their whole life as a singer, dancer, thespian, and musician. They also have experience in modeling, fashion, and photography. As one of the most impactful performance artists of the moment, they have also been outspoken as an activist, using their voice to spread love and acceptance.

Last week, I was lucky enough to talk with Adé Cônnére about their background and work as an artist in many forms. They also spoke to me about their current music project and upcoming show.

Background
Cônnére has been an artist their whole life, having been brought up learning to perform. They were raised in Denver in an artistically inclined family: Cônnére's parents, both performers, met while working on the set of a musical, and their grandmother was an opera singer. By the age of four, Cônnére was performing on stage.

They said, "[It] has been a lifelong effort for me," music and performance having been an integral part of their experience growing up.

Performance arts
Well known in Seattle's drag and performance scene, Cônnére highlighted some notable moments in their career so far.

They have been in Seattle for 17 years and built much of their presence as an artist here. While they learned "the tools of the trade" in Denver, "Seattle is really where [they] discovered who [they] wanted to be as a performer."

Cônnére does not consider themself a drag artist, as they "have always been so gender fluid" in their expression, but their performance work has often crossed paths with drag shows.

One of their most notable performances was Bacon Strip, a drag pageant. Cônnére said, "Especially in Seattle, it was a big, big part of forming myself as an artist. Sylvia O'Stayformore was so instrumental in allowing me the space to just create."

Another notable time in their career was performing in Ian Bell's "Brown Derby" series. In finding themself as a theatre artist in Seattle, Cônnére did "stage readings of movies, and it was a really farcical, fun thing."

Visual arts
Outside of being a performer, Cônnére has also explored fashion. They started modeling when they were 16 years old in Denver and have done catalog work and fashion shows. In Seattle, they decided it was time to "create [their] own sort of narrative as far as fashion goes."

Since the COVID-19 pandemic shook our world, Cônnére also created a photography series called "19 Looks of COVID-19," consisting of 19 self-portraits. In this project, they used "scraps of things [they] had around the house" to make masks paired with different looks. They "feel very proud, because it's not easy to pull 19 looks out." This project taught them about photography and being on the other side of a camera. While "it was really a gamble," it turned out to be a "fun way to keep activated as an artist" during the pandemic.

Activism
Cônnére is, in their own words, "a Black, Queer, femme-presenting, Genderqueer person" fighting "for queer rights, trans rights, [and] with the Black Lives Matter movement."

After being attacked several years ago, Cônnére was catapulted into the realm of activism. "It wasn't something that I ever really thought about," they said.

For Cônnére, being an artist and true to themself has been another form of activism.

Being a strong advocate for change is very important to Cônnére. They are "spreading a message of love and acceptance and also just finding your power." They hope that through their work they can "inspire people to really be themselves& and to accept and love the people that they may not understand."

Speaking out authentically - and using their art to do so - is a way of being visible for young, Black, Queer people.

Cônnére reflects that "art isn't necessarily being loved and accepted but trying to stay on a platform and stay relevant and have a voice to be able to advocate for people like me is really important to me."

Current projects
Currently, Cônnére is performing in the disco band Bijoux. Music has "always been my first love," they said. Their musical partner Jayson Kochan reached out to them to start creating original music together after the duo played together for several years.

Despite the challenges musicians are facing with COVID-19, Bijoux has found ways to connect with their listeners. Artists "have to look at the world around [them] and adapt," which they have done with their music.

Recently, Bijoux performed at Vermillion together as part of the "Artists Behind Glass" series, a set of performances that place musicians behind a window for listeners to hear from a safe distance. Bijoux also performed the Northwest Film Forum's "Tour Around Town," which benefits local venues and artists. These performances can be found online.

Cônnére is also excited to be recording of an album with Bijoux right now and planning music videos. Bijoux will be premiering an online show on June 1 through Solarium Creative, which will be available through the organization's website, https://solariumcreative.works.