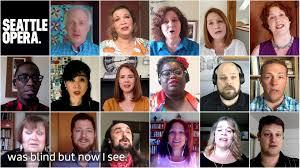 SEATTLE- The Seattle Opera has announced the inaugural cohort of the Jane Lang Davis Creation Lab, which aims to support a new generation of storytellers in opera. The initiative is open to Washington artists ages 18-30 of all backgrounds - including those without opera experience. The 15 people selected will create short works, which will be performed in Tagney Jones Hall at the Opera Center in 2021.

"Opera cannot continue without new stories and new voices to complement great works of the past," said Seattle Opera General Director Christina Scheppelmann. "I am so glad that the project has attracted high-caliber and accomplished artists, who bring diverse experiences to the program." In addition to musicians and theaters artists, participants include a fiction writer, a film producer, and a Juilliard student, [among others].

"As a trans and disabled artist, I've found it can be difficult to get the same mentorship, training, connections, and funding as my peers. The fact that Seattle Opera is using its resources to bridge that gap will make a significant impact on my development as a playwright/librettist and enable me to do what I love: tell stories about people like me."

Additional librettists include Aaron Jin, a gay Asian-American writer and filmmaker who has previously worked with 5th Avenue Theatre; and Brian Dang, a 2020-21 Hugo House fellow whose play h*llo k*tty syndrome is supported by 4Culture and Seattle Office of Arts and Culture. Mirabai Kukathas, a two-time winner of the Young Playwrights Project and finalist for MoPOP's SoundOff!, will also participate, in addition to E. Lily Yu, author of On Fragile Waves, forthcoming from Erewhon Books, and recipient of the Artist Trust/LaSalle Storyteller Award ('17).

Composers include Chess Albaneze, a genderfluid autistic trans man who's been composing for six years; Rheanna Atendido, a second-generation Filipino-American singer-songwriter and playwright-composer; and Drew Swatosh, who's participated in the Oregon Bach Festival Composers Symposium and holds degrees in music composition from Western Oregon University. Additional participants include Christopher Reed, an award-winning composer for film and concert; and Steven Tran, a self-taught composer, orchestrator, and music producer. Elise Winkler, currently studying at the Juilliard School, is also excited to join Creation Lab. Winkler's work has been performed by members of the Seattle Symphony and the Bremerton Symphony Orchestra.

Most participants applied independently and will be paired off into composer/librettist teams. But the cohort also includes established teams: Larisa Juno (librettist) and Rico Lastrapes (composer), plus Julia Koyfman (librettist) and Paul Stovall (composer). Juno, a songwriter and lyricist with roots in symphonic music and brass instruments, has created original works over the last decade, and Lastrapes, an Equity actor, is a composer, multi-instrumentalist, choreographer, and teaching artist. Stovall is a graduate student at the Seattle Film Institute studying film composition, and Koyfman is an award-winning lyricist/librettist, screenwriter, filmmaker, and comedian.

"Opera has always intimidated me," Koyfman said. "Musically it was complex, visually it was gargantuan, and culturally it felt out of reach. Though it overwhelmed me, I still listened. I attended performances at the Seattle Opera. I sat fearfully out of place in my seat, waiting for the rollercoaster ride to begin. Having the opportunity to be part of the Jane Lang Davis Creation Lab is incredibly meaningful to me. It's an opportunity to turn years of fear into power and excitement."

Participants were selected and began work in November 2020 and will receive support throughout the development process, refining and developing their pieces through table readings and music workshops. In addition to working with Seattle Opera administrators, each team will have dedicated time with mentors from across the music and theater world. The composers and librettists will have approximately five months to complete their works, with final rehearsals and performances slated for April-June 2021.

Mentors for this year's lab include Tazewell Thompson (librettist and director), co-creator of Blue, an opera about the love, loss, and resilience of a Black American family; Aishé Keita (actress), recognized for her work in Danai Gurira's Familiar at the Seattle Repertory Theater; Kamala Sankaram (composer), whose work is in demand all over the world; and the creators of The Falling and the Rising ('19), Jerre Dye (librettist) and Zach Redler (composer).

Established in 1963, the Seattle Opera is committed to serving the people of the Pacific Northwest with performances of the highest caliber and through innovative educational and engagement programs for all. Each year, more than 95,000 people attend Seattle Opera performances, and more than 400,000 people of all ages are served through school performances, radio broadcasts, and more. By drawing our communities together, and by offering opera's unique fusion of music and drama, it creates life-enhancing experiences that speak deeply to people's hearts and minds. Connect with the Seattle Opera on Facebook, Twitter, SoundCloud, and 98.1 Classical KING FM.

Courtesy of the Seattle Opera