[ICYMI] Checking In with Martha Davis of The Motels; Playing Zootunes on Wed, August 28th 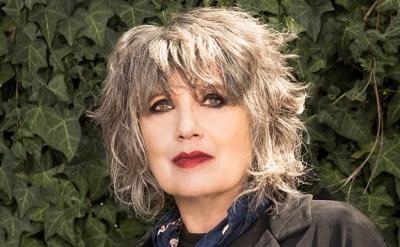 Martha Davis, longtime lead singer of Northern California new-wave legends The Motels, knows how to reach listeners. The emotion-laden quality of her vocals on early minor hits such as "Total Control" and "Whose Problem?" hinted at what Davis was capable of transmitting. In 1982, The Motels struck emotional gold with the massive hit single "Only the Lonely," followed a year later by "Suddenly Last Summer," two songs that packed a wallop and connected with listeners.

Davis and the current incarnation of The Motels (featuring long-standing member Marty Jourard) are still at it and will be one of the bands performing on the Lost '80s Live tour throughout the summer. Davis was kind enough to take a break from operating her 72-acre Oregon, ranch to answer a few questions.

Gregg Shapiro: 2019 marks the 40th anniversary of the release of the eponymous debut album by The Motels, which contains one of my favorite songs, "Total Control." Is there anything in the works to mark the occasion?

Martha Davis: Aside from already dusting off [the song] "Atomic Café" and putting it back in the set... It's funny, that album is my favorite of all the Motels albums. There's something about that one that speaks to me. We play more songs off that album than any other album. There has been talk about playing the album [live] in its entirety, which means people would hear "Love Don't Help You Win at the Track," which would be interesting [laughs]. The only reason I'm hesitant is that it seems to be a thing that's done all the time now. It seems like kind of a gimmick [laughs]. That's the only thing that's making me go, "Oh, I'm not sure about that."

GS: I think it would make a lot of people happy if you did do it.

MD: If it happens, it wouldn't be until later in the year. Right now, we have a lot of '80s shows coming up, which are not the full show. I'm actually working on a more conceptual Motels show that I would love to do, and maybe in one of those we'd play the whole first album. I'm working on a bunch of stuff.

GS: What does it mean to you still be performing and recording as the lead of The Motels?

MD: It means that it's fun [laughs]. It's the most wonderful band. This [version of the] band has been together 16 years. Marty [Jourard], who was in the first one for eight years, rejoined with us in 2011 for the Apocalypso re-release tour. He's been with us ever since. We call him "the new old guy." We've known each other for so long and we get along.

GS: During August and September 2019, The Motels will be performing as part of the Lost '80s Live tour. What are you most looking forward to about the tour?

MD: It's always fun to see the old gang. Most of us have been interacting in some form or other for years [laughs]. It's great to see everybody and say "hi!" The downside is that it's short. You play three songs and you're gone. We're going to be doing new music. We have a great new album that came out last year. I just started a record company, and we're going to be re-releasing it on vinyl because I don't think it got the fanfare it deserved. It's fun to be with the band performing new stuff. At the same time, there's nothing wrong with a little nostalgia and going out and playing some hits [and] seeing people enjoying the hell out of themselves.

GS: You mentioned the recent Motels album Last Few Beautiful Days, which has been receiving its share of accolades and, as you mentioned, is being reissued on vinyl by Remarkable Records. As an artist whose original albums with The Motels were released on vinyl the first time around, what do you think of the vinyl revival?

MD: I'm so delighted with it. I really am. For a billion reasons. I don't think we're going to get away from the digital era, because there is still going to be streaming and everything, but the new, very compressed sound is weird and digital.

MD: That's the one! Not warm. Being able to capture that and the wide sonic spectrum with vinyl is so beautiful. And the artwork and everything about it. Not everybody has a turntable—and they probably won't—but it's weird to live in a world where we have vinyl on the one hand and streaming on the other

GS: It's quite a polarity.

MD: Yes, and there's not a lot in between. Some people do stream and then go home and put on their albums, that's for sure. The music business itself is so strange these days. Everything is strange these days! What am I saying?

GS: I agree. The Motels' 1982 album All Four One contained the top-ten hit "Only the Lonely." What did it feel like to have achieved such an accomplishment?

MD: Obviously it was awesome because it's what you try to do. But it was a little bit of a double-edged sword. That album was very successful. But to me it's not as cool as the first album [laughs]. It's much more polished, more MOR [middle of the road], more for the mass consumer. Even in my old age, I tend to be a quirky woman who likes shit that's a little weird [laughs]. At the same time, [while] I was totally happy with the success, I felt like I'd maybe compromised. Now, it's all up to me so I can do whatever I want to do [laughs].

GS: Did you ever hear from Roy Orbison, who had a hit with a similarly titled song in 1960?

GS: We talked about the trend of bands performing classic albums in their entirety in concert. Another music trend is tribute bands, which have become all the rage in recent years. Are you aware of the existence of any Motels tribute bands?

MD: I think there is one! I was thinking of making my own, because they make a lot more money than the regular bands [laughs]. I'll just get some girl and train her and put her out there.

GS: I was wondering how aware you and The Motels are of a following within the LGBTQ community?

MD: I am aware it. I was doing a lot of gay pride festivals, and that's kind of fallen away. I really want to get back to that. It's something that I keep bringing up. This is a community that I've always loved. I think that it's been reciprocal.

I think that it was most profoundly noticed when I first moved to Portland. I was invited to come and do a few songs to tracks for the Pride fest. I started to sing "Only the Lonely," and I looked out at the crowd and thought, "Holy crap! This song is completely about that!" I was singing "we walked the loneliest mile / we smiled without any style / we kissed altogether wrong / no intentions." It's a gay anthem in that sense, but it's also about alienation. It's about the same things that separate us all and make us scared and awkward.

I've had gay and lesbian people come up to me in tears after a show. I get it! It's an emotion that's specific to anyone. It's a human problem. Different minority groups get shoved so far in that direction that their otherness becomes like a plague.

Don't get me started on the way of the world or I'll just go on forever. We are in a really awful time. But we will come back from this.

The Motels will perform on August 28 as part of Lost '80s Live at Woodland Park Zoo in Seattle.

Entertainment journalist, poet and fiction-writer Gregg Shapiro lives in Fort Lauderdale with his husband and dog.