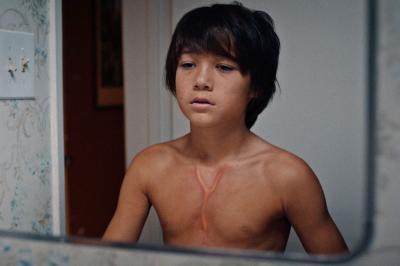 Even though it carries an R rating, The Djinn would be a pretty decent "gateway horror" flick for older kids who enjoy reading the works of Alvin Schwartz or R.L. Stine. Set in 1989, the film follows Dylan Jacobs (Ezra Dewey), a mute 12-year-old who has just moved into a new apartment with his radio deejay father Michael (Rob Brownstein). While going through a box of junk left by the former tenants, he discovers a book of ancient spells and demonic lore, including a spell that summons a djinn and potentially grants the caster a single wish.

After his dad goes to work the graveyard shift, Dylan disregards the warning at the bottom of the page involving the risks to his immortal soul and decides to try out the spell. He believes that if he had a voice, his mother would still be around, and so that's the wish he asks for after lighting the sacred candle and adding three drops of his blood into the melting wax.

It isn't terribly difficult to figure out what happens next. This isn't a game: the djinn is real and things do not work out as Dylan had imagined. Trapped in his own house, unable to call for help, the shocked youngster finds himself in a cat-and-mouse battle with a dangerous, soul-sucking demon. It's another case of "be careful what you wish for," with Dylan going all Kevin McCallister at his Home Alone best on the djinn to survive the night.

Written and directed by newcomers David Charbonier and Justin Powell, this is a handsome-enough one-location thriller that's stylishly shot by cinematographer Julián Estrada and features a strong, suitably disquieting score from composer Matthew James. Youngster Dewey, who is in almost every scene, does a fine job as well, delivering a nicely modulated performance that overflows in authentic emotional nuance.

Problem is, there are no shocks and zero surprises to be found in the scenario that Charbonier and Powell have cooked up. The film tends to play like a short or a student film expanded to feature length, and even at a briskly paced 82 minutes, this thriller still feels frustratingly padded. It all builds to a supposedly explosive conclusion that more mature viewers will see coming from a mile away, all of which helps make this supernatural thriller more of an interesting, well-made trifle than it is anything remotely substantive.

All of which is why I say this one will work better for younger audiences than it does for adult horror aficionados. The djinn creature design is pretty cool. The spells he casts to ensnare and trick his prey into making a fatal mistake are relatively clever. Dewey is very good as Dylan, and I imagine viewers around his age will find it easy to relate to the character. The message at the end, while very Goosebumps meets Are You Afraid of the Dark?, is effectively delivered with the requisite amount of sly, winking-at-the-camera conviction.

None of which means I had a great time watching it. While I was impressed by the production values and the filmmaking confidence that Charbonier and Powell showcase - especially considering all they successfully pull off on what had to have been a minuscule budget -I don't have much in addition that's positive to add. It's fine, nothing more, and that's all there is to it.

If I had seen this one as a kid, I think I might have loved it. But as an adult who has viewed more than her fair share of supernatural tales exactly like this one, I cannot say The Djinn did much for me. Its malevolent spell sadly doesn't last, and if I had one wish for Charbonier and Powell, it's that for the next magic trick they conjure up to be something a bit more imaginative.