Entertaining Retreat a horrific weekend of catharsis and survival 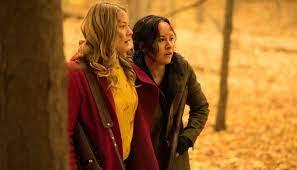 Renee (Tommie-Amber Pirie) and Valerie (Sarah Allen) set out on a road trip to a secluded cabin in the woods for a shindig with a couple of friends about to tie the knot. The two have been dating for some time, and they're at that point in their relationship where a permanent future together has become a prime topic of conversation. Renee has commitment anxiety. Valerie would like to put a ring on it.

But before those conversations can be had and any issues between them can be ironed out, the women find that things at the cabin are strangely amiss. Not only are their friends missing but Renee and Valerie also discover they're being hunted by a small group of murderous backwoods homophobes. Make no mistake, this is not the weekend of relaxing seclusion and blissful solitude they'd been promised.

Even if it doesn't do anything unexpected, The Retreat is a well-made and amusing survivalist slasher film that gets the job done with suitably violent and gory aplomb. Its primary twist is the obvious one highlighted in the synopsis: the women being hounded, stalked, and tortured by masked madmen also happen to be lesbians whose relationship is at a metaphorical crossroad.

There's not a lot more to it. Making the most of what had to be a limited budget, director Pat Mills plants his foot firmly on the accelerator and keeps exposition to a minimum. Everything I needed to know about Renee and Valerie I learned while they were traveling to their destination and in the brief, idyllic first moments they have exploring the forests and fields surrounding the cabin. Alyson Richards' script is a model of simplicity and brevity. The filmmakers treat their audience with respect, doing nothing that belittles their intelligence.

What I do take issue with, even with a novel, well-constructed LGBTQ bent to the material, is how by-the-numbers much of this turns out to be. The killers are one-dimensional lunatics. They also aren't very interesting. It is hinted that they've been doing this sort of thing for some time. But considering how poorly executed their plans for the two women are, that no one has attempted to turn the tables on them before this (or how they weren't at the very least tracked down by law enforcement investigating prior disappearances) made zero sense to me.

Still, Renee and Valerie prove to be terrific "final girls," and while we're not talking Revenge or You're Next levels of excellence, Pirie and Allen still give it their all with enthusiastic vivacity. The blood-and-guts quotient is high yet never feels exploitive, and I liked that no one -neither the killers nor their prey -had anything resembling superhuman abilities beyond what a normal person under extreme duress would likely exhibit. The film also is thankfully free of the downbeat nihilism that can so often cripple thrillers similar to this one, with Richards adding a cathartic tenderness to her scenario that caught me by surprise.

If nothing else, The Retreat is another refresher on the cinematic rule that taking a holiday break at a secluded cabin in the woods is never a good idea. Awful things are bound to happen. Thankfully, when said awfulness is as entertaining as this thriller, that's one reminder I'm okay with having reiterated.