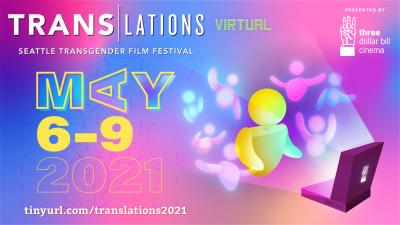 As a film lover of a Transgender experience, it was hard not to enjoy the diverse offerings and events this year at Translations: Seattle Transgender Film Festival, produced by Three Dollar Bill Cinema, the geniuses behind the annual Seattle Queer Film Festival.

The event went virtual again this year, streaming rare gems from around the world into my living room. With popcorn in hand, I was happy to be among those participating May 6-9.

The festival showcased 52 films from around the world, including Brazil, Russian, Iran, Japan, Italy, India, Sweden, and the United States. The films garnered over 2,140 views from participants in 27 states and eight countries. Another 742 people joined the panel discussions and events via YouTube and Facebook.

All in all, I didn't miss the packed venues or ticket lines. The online platform had all the usual bells and whistles that a festivalgoer would expect: a welcome from Three Dollar Bill Cinema, sponsorship information and ads, and information on the nonprofit film partners. My streams had no interruptions, except when I hit pause to use the bathroom or refill my drink.

The only thing lacking was the traditional socializing that brought me out to the festival in years past. Speed Friending and a Filmmaker Networking Hour were held via Zoom, but I still have not personally mastered genuine human interactions over the internet.

Grimm's short film was particularly impactful to me as someone who has spent the last year documenting the Black Lives Matter protests in Seattle. While limited in its scope, it focused on the struggles facing Trans Black and Indigenous people and people of color and the importance of white allies fighting internal and institutional racism.

The clear standout this year was the opening film, No Ordinary Man, which chronicled the life of Trans legend Billy Tipton, a jazz musician who performed from 1936 until the late 1970s. The film was interlaced with actor portrayals and documentary footage to create a compelling and mesmerizing narrative. The cast included local activist and author Jamison Green. The film is scheduled for a limited release later this year.

I also caught several of the featured films this year, including Always Amber, a drama from Sweden, directed by Lia Hietala and Hannah Reinikainen Bergeman. The film was full of gender-bending young love and traditional teen angst and vices. It felt a little voyeuristic by puritan US standards, but I did appreciate how it didn't hold anything back.

Drama Queen, a Vietnamese action comedy directed by Kay Nguyen, took me some time to warm up to, because the underlying storyline was a little over the top. The main character is likeable, and the tale of friendship interwoven throughout was touching. The final scenes bring the story together and make its intentions clear.

Genderation, a German documentary by Monika Treut, takes the audience back twenty years to revisit the subjects of Gendernauts, a first-of-its-kind documentary about the Trans movement in San Francisco. It was a little slow going for my taste but insightful. I did enjoy hearing about the journey of other gender pioneers, and there was a lot here I could relate to.

My Name is Baghdad, a Brazilian film about a gender-defying teenager in a working-class neighborhood in São Paulo, was also enjoyable. I found the musical numbers to be out of place, though, because the story stood on its own and the main plot points were compelling and realistic enough without them. However, they were well choreographed and provided some comic relief from the weighty underlying issues that define the friendships and family dynamics in the film.

The closing night film from Brazil, Valentina, was a personal favorite. It is not the typical Trans teen coming-of-age film you might expect here in the United States. It does not patronize the audience or seek to sugarcoat anything. Instead, it's an honest tale of a girl seeking to live out a normal teenage existence without the judgment of her close-minded community, all while navigating life with an absent father, the trauma of sexual assault, and making friends in a new town.

I spoke with Maddy Szmidt, programs and operations coordinator at Three Dollar Bill Cinema; and Alanna Francis, development and community outreach manager, this week about Translations and the incredible task of programing and delivering the 2021 festival during the on-going COVID-19 pandemic.

Renee Raketty: What was your overall impression of how the festival went this year?

Maddy Szmidt: The festival went great. We were able to expand our programming to include 52 films, and we reached over 2,000 watchers through paid screenings and recorded panels and Q&As available through our Facebook and YouTube accounts. We had more submissions than last year, which made it even harder to narrow down the final program. We also had some great engagement at our live Zoom events, which was really exciting. Alanna

Francis: The event was an immense success. We were able to be innovative and create engaging film opportunities for all of our audience members and filmmakers. The abilities we have to think outside of the box within film festival industries and Queer/Trans representation in media is a true treasure and privilege, and we continue to challenge ourselves.

Raketty: What did you like most about the 2021 festival?

Szmidt: I loved being able to connect with filmmakers and festivalgoers. My favorite events were Speed Friending and the Filmmaker Networking Hour. Being able to talk with others who love Queer and Trans cinema, and connect people with each other is amazing. It was great to hear from attendees how much the festival means to them, especially during a time in which Trans rights are being attacked throughout the country, and world.

As a film lover, I also loved seeing the newest emerging talent in the filmmaking community. Some of my favorite films were To You My Love, Coming Out, and To the Farmhouse. There was a vast array of identities, genres, themes, and aesthetic styles represented in the fest this year, which reflects the vast spectrum of Trans experiences.

Francis: What is there not to like? We started the days off with utmost fabulosity, starring morning Tea Time, embracing each morning with fierceness.

Almost nothing beats bringing together Trans filmmakers from across the world to share love, space, and resources at the Filmmaker Networking Hour. In times when we often cannot physically embrace each other and Trans rights are being brutally attacked internationally, it is vital we connect with each other.

And our film programming highlighted a diverse variety of Trans perspectives and identities, pushing the boundaries of what Trans representation can look like. Utilizing film to explode representation, not only to include people within binaries but to intentionally evolve the societal normalization of the full spectrum of identities that create our LGBTQIA+ communities.

Raketty: What were the challenges of putting on a virtual festival again this year during the COVID-19 pandemic?

Szmidt: It's definitely been difficult to maintain the festival feeling, especially as an organization focused on building community. We've had to get creative when going virtual. I think it's amazing that we've still been able to create events to bring communities together, even when we feel so isolated.

We'll definitely always keep virtual as a component of our festivals, even once in-person screenings are permitted again. We're able to reach people outside of our Seattle/Capitol Hill bubble, who otherwise would probably never have had access to these incredible films, plus people who wouldn't have had the time or capacity to spend all day at a film festival can watch the films on their own time.

Francis: Ensuring that far and wide, rurally, internationally, and beyond, Queer and Trans communities know how and when to access our programs. Through virtual programming - which will always be a part of our festivals - we have not only expanded our reach but opened accessibility, as we work to further include the vast identities/realities within the Queer and Trans experiences.

Raketty: What else would you want our readers to know?

Szmidt: Stay tuned to our social media and website for more info on our upcoming Pride events, and other programs we'll be hosting throughout the year, including Seattle Queer Film Festival 2021.

Francis: Create, collaborate, and dream with us at Three Dollar Bill Cinema. Check out our social media and website to see our upcoming programs like Pride, Reel Queer Youth, and the Seattle Queer Film Festival. Visit ThreeDollarBillCinema.org.