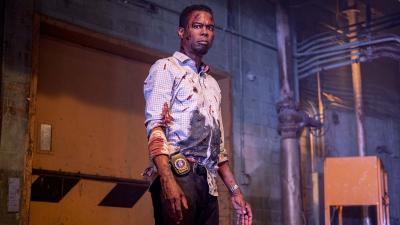 All of which makes for a peculiar, if still intriguing, viewing experience. Spiral comes close to being a test case of attempting to enjoy a motion picture for what it is and not getting too angry about it not being what you hoped it was going to be. It follows in the footsteps of 2004's Saw (and its seven sequels of varying quality) with unwavering perseverance, offering little that is unexpected and even fewer moments that could be construed as anything resembling a surprise.

But there is a noticeably intense urgency to Bousman's return to the franchise. More importantly, there is a tactile grittiness which adds a veneer of authenticity that somewhat mitigates the more fantastical and cartoonish elements inherent to the series. While we're still talking about a mysterious killer who creates outlandishly ghoulish traps for their victims to try to escape from before meeting almost certain - and excruciatingly painful - death, there is still an aura of truthful sincerity lurking at the center of this new story that's moderately laudable.

Veteran Detective Ezekiel "Zeke" Banks (Rock) and his new rookie partner Detective William Schenk (Max Minghella) are after a deranged assassin targeting allegedly crooked cops. This psychopath with an agenda is utilizing the M.O. of infamous "Jigsaw" killer John Kramer, making their intended victims play life-or-death games that are almost impossible to win. With the body count rising it becomes apparent this copycat wants Zeke to pay particular attention to what it is they are doing, the detective wondering if he should turn to his celebrated father, retired police chief Marcus Banks (Samuel L. Jackson), for advice before things get truly ugly.

Screenwriters Josh Stolberg and Pete Goldfinger give Zeke a solid backstory that would fit right at home in a random episode of the original "Law & Order" or "Homicide: Life on the Street." Over a decade prior he had to report his partner to Internal Affairs. Ever since, Zeke's been a pariah in the department, the detective labeled as nothing more than a rat unworthy of support or friendship from his fellow officers.

Rock brings a wearily withered gravitas to his performance that's wonderful. The actor's trademark comedic timing is utilized to terrific effect. Many of Zeke's most pointed barbs purposefully ricochet off of their intended targets and slam right back onto the detective almost as if the man's own self-hatred trumps the disgust he feels towards many of the other officers he works with every day. Rock digs in with a determinedly surly authority that only grows as events progress, making the moments where he lets down his guard and displays a bit of vulnerability more potently effective than they otherwise would have been.

As great as that might be, figuring out who the Jigsaw copycat is doesn't take a lot of effort. Their identity is pretty obvious, and as far as ah-ha! moments are concerned the one involving this particular individual is a definite letdown. Also, other than Rock none of the other actors, including Jackson, make much of an impression, making it difficult to care when any of them get ensnared in one of this wannabe's traps and is forced to try and dismember or cripple themselves to survive.

Still, Bousman handles all of the carnage with confidence, and I couldn't help but positively respond to the cold, bleakly austere mood the filmmaker and cinematographer Jordan Oram strike. Composer Charlie Clouser provides a crackerjack score, waiting until just the right moment to unleash his memorable theme music from the original series.

As for the blood, guts and gore, while they're a bit tamped down from the other Saw entries, that does not mean things don't get suitably nasty. The creativity fueling all of the explosively vile butchery (there's a nasty bit involving a person's fingers that icked me out something fierce) is readily apparent, and I liked that Bousman kept CGI enhancement of the impressive practical makeup effects to a noticeable minimum.

This is still a Saw film. For all the talk that Spiral was going to take things in a new direction, even with A-list stars like Rock and Jackson on hand for the ride this film still follows a template so similar to the original series it ends up being less of a spin-off or a reboot than a random ninth entry in the franchise. For fans, this will likely be more than enough to satisfy. For everyone else? This game will not be for you. I suggest playing something else.