Punchy Without Remorse is an action-filled throwback 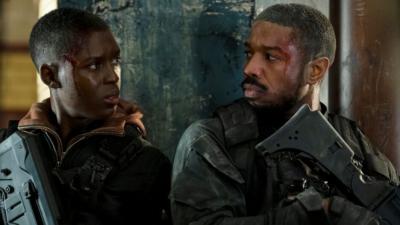 After his wife and unborn child are murdered and he is critically injured in an assassination attempt, decorated Navy SEAL Sr. Chief John Kelly (Michael B. Jordan) is determined to find out who wanted him dead and why. After completing his rehab, and with the aid of friend and fellow SEAL Lt. Cmdr. Karen Greer (Jodie Turner-Smith), he is given the name of a Russian diplomat who may have authorized the hit on him and his family.

The information Kelly learns sets wheels in motion that could have international repercussions, and Secretary of Defense Thomas Clay (Guy Pearce) wants to nip this threat in the bud before it blossoms. He tasks Greer and CIA analyst Robert Ritter (Jamie Bell) with pulling together a clandestine team to deal with the matter, and he insists Kelly be involved. Clay feels that this talentedly lethal wild card with a personal vendetta might be willing to go to extremes the rest of the unit won't descend to, and considering what they're up against, that makes him perfect for the job.

Based on the 1998 novel by Tom Clancy, Without Remorse is the origin story for one of the author's most popular characters, previously portrayed by Willem Dafoe in Clear and Present Danger and Liev Schreiber in The Sum of All Fears. Writers Taylor Sheridan (Hell or High Water) and Will Staples reconfigure the source material a bit to bring it up to date and to fit Jordan's talents. They've also opened up Clancy's world a tad more, setting up a scenario that could lead to a potential franchise.

While it's no Hunt for Red October, this stripped-down, unapologetically retro thriller still gets the job done. Director Stefano Sollima (Sicario: Day of the Soldado) stages crisp, punchily brutal action sequences that are sharply shot by award-winning cinematographer Philippe Rousselot (A River Runs Through It) and kinetically cut together by editor Matthew Newman (Drive). It's closer in tone and style to the two Harrison Ford Jack Ryan films (Patriot Games, Clear and Present Danger) than it is to a Jason Bourne or modern James Bond installment, making this something of an aggressive throwback I couldn't help but respond to positively.

Not that all of it hits the mark. While there is a nice bait-and-switch involving a familiar actor who I assumed was going to play a major role in the proceedings, only for that to end up a bullet-riddled red herring, I cannot say that Sheridan and Staples' script does a good job concealing its major twists. Most notably, it's easy to ascertain who the mysterious puppet master pulling the strings behind this US-versus-Russia discord is. Also, other than Ritter and especially Greer, the majority of the supporting characters are so thinly realized that remembering who is who and why they are important is practically impossible."

What does work is the relationship between Kelly and Greer. Their friendship has weight, and I loved that they could keep from seeing eye to eye and yet still maintain a high level of respect and trust. Jordan and Turner-Smith are extremely good when they are together, and if the two actors were to team up again in the future I'd be first in line to see what they've come up with, solely based on the mesmeric chemistry they're displaying here alone.

I don't like the mid-credit scene that sets up possible sequels. The dialogue falls unconscionably flat, so much so that the moment is borderline hilarious for all the wrong reasons. I also don't think the climactic resolution where the real villain's identity is revealed works very well. The rhetorical device utilized to trip this person up into inadvertently showing their true colors is so lazily delivered that it was almost as if the two actors in the scene knew how dumb the scene was and were purposefully attempting to undermine it.

But I loved a couple of the central set pieces Sollima stages, especially one near the end where Kelly faces off against seemingly an entire city's militarized police force all on his own. Jordan, while dialing back the manic ingenuity Dafoe brought to the character when he portrayed him in 1994, still makes this lethal killing machine his own. He has charisma to burn, and if a series born from Without Remorse does materialize, I'm curious to see how the actor's portrayal evolves with each new installment.