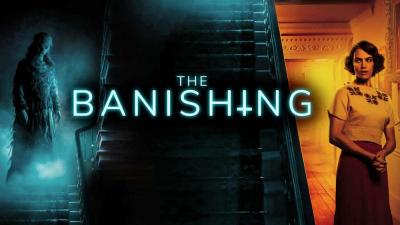 Can a 30-second scene right at the tail end of a motion picture derail what had been up to that point 90 minutes of solidly creepy, emotionally authentic, old-school haunted house fun? Christopher Smith's suitably atmospheric supernatural suspense yarn The Banishing sure made me ponder that exact question.

The director behind such ghoulish and unsettling gems like Severance, Triangle, and especially Black Death may have delivered his most ambitious genre mash-up yet. It also might be his most disappointing.

With Britain on the verge of war with Germany, Reverend Linus Forster (John Heffernan) has been posted to a small town with orders to try and renew the lapsed faith of a disenchanted citizenry. He, his wife Marianne (Jessica Brown Findlay), and their daughter Adelaide (Anya McKenna-Bruce) move into a massive house, clueless to its sinister past or its horrifying secrets.

Strange things begin to happen. Adelaide starts talking to an imaginary trio of friends in the form of three ghoulish dolls. Marianne has visions of violence and rage, most involving a blinded woman shrieking in pain. Linus starts questioning his wife's faithfulness. Topping it off, calmly severe stranger Harry Read (Sean Harris) urges the entire family to leave the house immediately, warning them of psychosis and almost certain death if they remain.

Smith skillfully handles most of the mechanics of this haunted house tale with requisite aplomb, and while he doesn't offer anything unique to the genre, the director still stages several spookily suspenseful sequences that insidiously dug under my skin. He also gets a strong performance from Findlay, and while Marianne is somewhat underwritten, the talented actress playing her brings an internalized complexity that's consistently intriguing.

But even if this tale is inspired by true events, the screenplay by David Beton, Ray Lines, and Dean Bogdanovich is a muddled jumble that never coalesces into something meaningful or memorable in its attempts to juggle a variety of themes, including faith, feminism, and fascism. None take root. The elements alluding to British officials in the Church secretly working to keep the country out of a war with Germany fall flat, while an entire subplot involving Marianne's volatile pregnancy with Adelaide and the involvement of the enigmatic Bishop Malachi (John Lynch) is frustratingly vague.

Yet I was relatively okay with a lot of this, because the mood of the piece was so spot-on and the performances were universally strong. Cinematographer Sarah Cunningham (Haingosoa) does a wonderful job casting an ominous visual spell, while composers Toydrum (Prevenge) provide a terrifically disquieting score that's almost certain to be one of 2021's best. Additionally, Smith paces the film with discomforting precision, and even if the resolution to this human tale of horror and tragedy isn't surprising, the emotional honesty of where the director takes things is.

It's all undercut, however, by a brief epilogue that makes almost all of the preceding 90 minutes of drama and mystery pointless. It makes no sense. It has the slimmest of relationship to everything that has transpired. It left me with mouth agape, wondering what the heck the filmmakers were thinking when they decided to keep it in the finished film. Worst of all, it makes all the minor missteps sprinkled throughout feel all the more egregious and impossible to dismiss.

Is it unfair that I want to write off The Banishing because of this one, undeniably brief sequence? Maybe, but because it's basically the last thing we see before the screen fades to black, I don't think it's as unjust as it may initially appear. Endings matter, even those last-second stingers that ask the viewer to question all they've watched or potentially see events in a new light.

In this case, said light is an unflattering one, and I can't help but wish Smith and his team had refrained from turning it on.