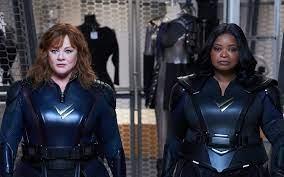 Thunder Force is not a great movie. Heck, I still can't decide if I even want to call it a good one. What I will say is that this labor of love for producer and star Melissa McCarthy and her husband, writer-director Ben Falcone, made me giggle. Their latest collaboration is thankfully more like 2018's politely endearing Life of the Party than it is their other three calamitous misfires - Superintelligence, The Boss, and Tammy - and that's a positive I'm willing to champion.

I think what struck me most while watching this one is how nice it is. For a superhero comedy aiming to deconstruct modern Marvel and DC aesthetics, it has an easygoing grace that's oddly winning. I was charmed by the relaxed nonchalance of what was taking place, and it was refreshing to watch a story about superpowered individuals where the stakes felt far more minutely personal and not so gargantuanly unrelatable.

After interstellar cosmic rays transform a select few genetically predisposed to evil into unstoppable villains dubbed "Miscreants," scientist Emily Stanton (Octavia Spencer) makes it her life's work to come up with a way to bring these evildoers to justice. On the night of her 25th high school reunion and on the verge of a major breakthrough, former childhood friend Lydia Berman (McCarthy) makes a surprise visit to Emily's new, technologically advanced Chicago headquarters, hoping to convince her to go to a party.

Though at one point they were inseparable, a silly argument during their senior year of high school tragically severed their unbreakable bond. After Lydia inadvertently takes a series of injections that give her super strength originally meant for Emily, the duo is forced to put the past behind them and work together for the greater good. They will become the superhero team "Thunder Force," battling Miscreants to better the lives of all Chicagoans living in fear of these powerful baddies.

There's not much more to it. Emily will find a way to give herself the power of invisibility, and Taylor Mosby and Melissa Leo pop up in key supporting roles as, respectively, the scientist's whip-smart 15-year-old daughter Tracy and her trusted assistant Allie (they're basically a dueling pair of Alfreds). They will all face off against the sinister mayoral candidate William "The King" Stevens (Bobby Cannavale) and his pair of henchmen, the amoral killing machine Laser (Pom Klementieff) and the begrudgingly bad, aptly named thief The Crab (Jason Bateman).

The rest is all a series of brief vignettes of Lydia and Emily learning how to use their powers as they figure out how to become crimefighters. They battle a few evildoers, foil a robbery, and become popular Chicago celebrities. Old wounds are healed. Friendships are renewed. Faith in society's inherent decency is restored. A celebratory pickle is consumed, and uncooked chicken is greedily slurped down as if it were pasta.

Not all of the jokes land, and as is par for the course in these McCarthy/Falcone collaborations, there is a loosey-goosey feel to things that makes the film come across as it if it were slapped together in the editing room at the last second with no concern with how one scene connects to the next. Characters are introduced and then forgotten about for long stretches, only to be reintroduced for no real reason other than to remind the audience they're still around, and significant plot points are summarily dismissed for no logical reason.

What keeps things from falling to pieces is that it's just so pleasantly affable. While McCarthy's uncouth, sarcastic side is still on full display, there is a selflessly openhearted generosity driving her performance that's wonderful. Lydia is a good person, and that doesn't change after she gets her superpowers. Even though it's been 25 years since their falling out, her sisterly affection for Emily hasn't diminished.

This kindness permeates every cell of the picture, giving things a strange, comforting benevolence I was unapologetically drawn to. McCarthy and Spencer are a terrific pair, each playing off of the other with such loving adoration that they could have sat for 90 minutes on a park bench chatting about '80s hair bands and I probably would have enjoyed every second of the conversation. Without them, I seriously doubt I'd have liked this film at all. With them, I almost can't imagine a world where Thunder Force doesn't exist.