Where You Are Is Not Who You Are: A rags-to-riches memoir of a Black female CEO 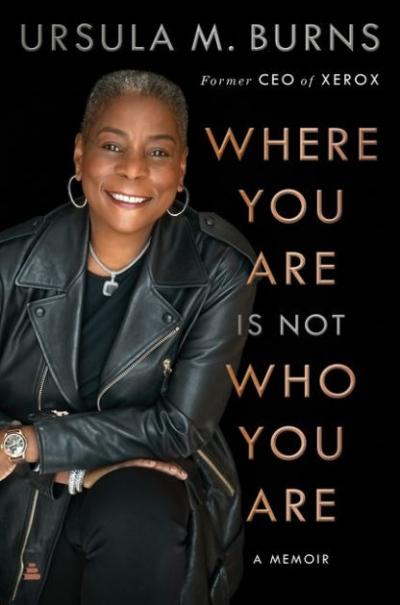 You don't have to have much for the former, just a little love and a place to launch. The latter, though, that takes some work. You have to see the goal, hold your confidence tight, and know yourself well.

And then, as in the new memoir Where You Are Is Not Who You Are by Ursula M. Burns, the former CEO of Xerox (and the first Black woman CEO of a Fortune 500 company), you step up and fly.

If you only get a few pages in, you might reconsider your plans to finish this book. Burns jumps almost immediately to the latter part of her career, in a dizzying chunk that's exhausting to read. Name-dropping features heavily, it lasts way too long, and it feels forced.

If you persist, though, you'll be happy when she settles in to share her rags-to-riches tale that has the feel of a TV movie. It rambles a little, but that is still appealing. Burns writes of poverty and determination, of resourcefulness and the love of family, before sliding into the story of her career again, in a very readable fashion.

When she was a child growing up in a New York tenement, Burns never thought about how much her mother sacrificed for her and her siblings. The family had food, shelter, and clothing, as well as a TV and schooling. It wasn't until Burns was almost grown that she realized what a feat this was: her single, Panamanian-born mother kept the family going on $4,400 a year.

Somehow, despite the lack of income, Burns was able to attend a Manhattan Catholic school, where she excelled in her studies and learned that being vocal could make a difference in how things were run. This outspokenness did indeed make change, but it also led to a certain amount of chiding when she was an adult.

Upon graduation, Burns had her pick of several major colleges, but she chose Brooklyn Polytech, after having decided upon a career based on potential income. It was heavily steeped in math, a skill she was good at though her more privileged classmates were better. But it only took a few months before she caught up and began tutoring others.

Burns loved school and she was grateful for the help she got from New York's Higher Education Opportunity Program, which provided support, both careerwise and economically.

At the end of her junior year in college, she accepted an internship position at Xerox, and the company supported her while she got her master's degree. Upon graduation, she took the full-time job they offered, a position that allowed her eventually to make history...

This is one of those books in which you need to prepare yourself to pick and choose what you read. Be ready to skim or skip parts. Do that, and you'll be fine; otherwise, reading Where You Are Is Not Who You Are could be a big task.