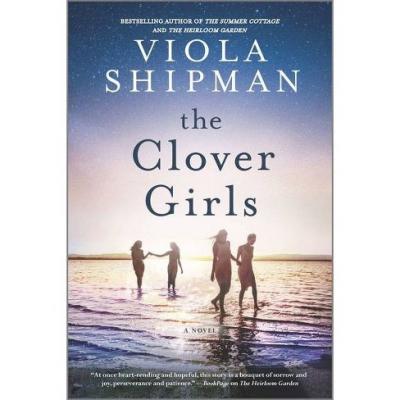 The grass is greener on the other side of the fence. Someone else's life is always better than yours. Greener grass often goes with sour grapes, though, but, as in the new novel The Clover Girls by Viola Shipman, it ultimately depends on how well you tend your own garden.

There's a meme-thread going around social media chiding men who write awkwardly about female characters. You might ask yourself, then, how author Wade Rouse, a Gay man writing under a female pseudonym, would do it.

The answer is: with a semi-contrived plot and a whole lotta heart.

She was sure that her husband David was embarrassed by the weight she'd put on since the kids were born and she'd had to give up her modeling career. Yes, she was once a cover model, lithe and beautiful. Now, she had an extra 15 pounds but no career, no forward-looking future, and no friends.

When they were kids at Camp Birchwood, Rachel told her campmates that she'd be a famous ac-tress someday. More than twenty years later, she was famous all right - as the spokeswoman for a mi-sogynist political candidate. Everybody hated what Rachel said on his behalf, and they sometimes hated her too. But she was happy, wasn't she?

As Liz sat next to her dying mother, it hit her: Liz's own kids and grandkids would never take care of her like that when the time came. So what kind of legacy was she leaving then? There was her online store and a respectable number of sales, but the creativity she had as a girl - the talent her friends appre-ciated - had never quite taken hold. And where were those friends these days, she wondered.

Em said she'd be dead by the time they read their letters, that the cancer had metastasized too far for a cure. Sweet, dear Emily was the only one who'd kept track of everyone; she'd hoped the friend-ship-shattering event that happened years ago was forgivable, so she had made a drastic move to try and make it so.

But is a four-leaf clover missing a leaf still lucky?

On one end, readers who are used to more action-packed novels may roll their eyes: the main characters in The Clover Girls are all celebrity look-alikes, their spat was schoolgirl-silly, the plot lines are oh-so-convenient (how many times will they spread Emily's ashes, and where did Liz get all that fabric?). It's enough to make you squint.

And yet, the basic story here is sweet and not outrageously dramatic. Shipman/Rouse instead makes it gentle, loving, squeaky-clean, and perfect for sharing with anyone who devours women's fiction like this.

So if you put aside the go-go-go novels and look beyond the contrivances, The Clover Girls may be your next obsession. You might not be able to leaf it alone.