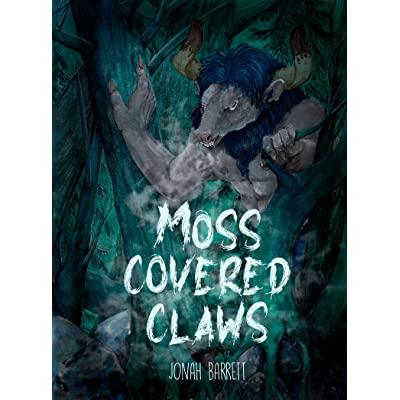 Jonah Barrett's first book, Moss Covered Claws, is a collection of Queer horror-fantasy short stories in which the main characters grapple with common life issues, such as bullying, the loss of a loved one, anxiety, and fear. Some common elements run through each of the fables, including Pacific Northwest attributes, LGBTQ+ characters, and of course, violence.

One such recurrence is nonhuman monsters of sorts, including large spiders (eek!). While not all the creatures are malicious or evil, there are instances of anxiety-consuming demons, and a lizard-like monster living in a bog. These represent regular human fears, such as abandonment, loneliness, and circumstances that are out of one's own control. One of the things I enjoyed most was the illustrations of the monsters in each chapter, all black-and-white drawings, some more detailed than others.

If you were raised in or reside in Washington or Oregon, you can instantly see the beauty of the Pacific Northwest's great outdoors depicted in this collection, including local berries, coastal towns and beaches, and popular sea critters. The imagery that Barrett uses to set each scene was not only extremely accurate but it also had me yearning to get outside. While reading the stories, inside on my sofa, I kept visualizing all the beauty in nature that was being described, and my heart was bursting with love for the Pacific Northwest.

One such memorable passage stood out to me: "The smacking and gurgling sounds of the anemones and mollusks seemed to grow louder. Air excitedly released as they anticipated their return to the ocean." Do you remember the last time you went to the beach, and heard the sounds of the sea life there?

Many of the characters in the book are part of the LGBTQ+ community. The author touches on the use of preferred gender pronouns, and even hiccups that might come up in polyamorous bisexual relationships. In addition, Barrett tackles a prominent issue that youth nowadays struggle with frequently: coming out as Gay while still in grade school and facing the physical and emotional abuse of schoolyard bullies.

Something else to appreciate about this book is the writing style, and the language. The conversations between characters can be so casual and relatable that often, it feels like you are actually there, in the scene. Furthermore, some of the language can be pretty saucy and straightforward at times, such as: "Dal slid their pants over their ass and started to wrangle on a pair of jeans." I must admit, there were points in these short stories where I let out a chuckle here and there, and that happened to be one of them. And that is something else to appreciate about this book: the humor that is sprinkled in.

As someone who enjoys watching horror anthologies, I was excited to read Moss Covered Claws, my first collection of short Queer horror-fantasy fables. I was unsure of what to expect going into this book, other than that it was most likely going to be an edgy and a potentially difficult read with wild monsters (there is a content warning). By the end of the book, I was nothing short of impressed. The fears and issues Barrett writes about are issues that people battle with in everyday life, but most importantly, the reader is left with a feeling of contentment and hopefulness.

If you are looking for a short-term escape from the pandemic - or anything in life for that matter - I highly suggest you pick up a copy of this collection and get to reading.