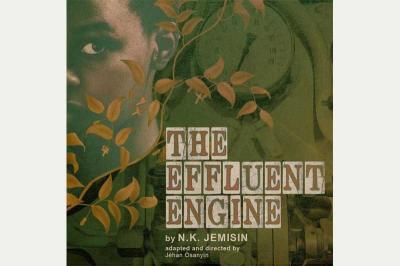 In 1791 the only successful slave rebellion in history began in the wealthy and flourishing French colony of Saint Domingue, located on the Caribbean island of Hispaniola. More than half a million African slaves revolted and by1804 had gained their freedom - and with it, they won the struggle for the independence of the Black republic of Haiti.

In 1825, following the success of the revolution, the French king Charles X demanded indemnity in exchange for recognition of Haiti's independence, declaring 150 million francs as the price (estimated to be over $20 billion in today's dollars), as well as compensation to the French colonists for the loss of slavery revenue. With French war brigs having accompanied the deliverer of Charles X's demands, Haiti was extorted into a payment agreement that it, the French, and the rest of the world knew it could not uphold.

New York Times-bestselling author N.K. Jemisin has now released an audio version of her short story The Effluent Engine, set in New Orleans during the 1800s, after the fight for Haiti's independence and amid its financial struggles. This creative and smart tale follows Jessaline, a Haitian spy (and possible descendent of revolutionary leader Toussaint Louverture), in her fight to help her country gain financial security as well as rid itself of toxic waste left over from the distillation process for rum.

The Effluent Engine is realistic and entertaining for reasons that go beyond its impressive science-fiction aspects and the Black female protagonist. The progression from subtle hints at the main character's lesbianism to her direct flirtation with the wealthy Creole scientist Eugenie was bold, relatable, and spicy!

Of course, the success of the interaction of these women is as much a credit to the voice actors playing these roles in the audiobook as it is to Jemisin's writing. What began as my conflicted feeling over the accent Naa Akua chose to voice Jessaline became appreciation for her acting ability when I learned that she was intentionally trying to imitate a New Orleans French accent over a Haitian Creole one.

The chemistry between these two women is electric to listen to and makes up for other details that seem to be missing from the audio adaption. When they discuss designing the blueprints for the methane extraction mechanism Jessaline would like to use to help Haiti, their exchanges are empowering. And their secret exchange under the cover of the willow tree is tantalizing, to say the least.

There is a also moment when Jessaline touches Eugenie's collarbone that is both sweet and provocative, as well as an illuminating insight into her feelings when Eugenie accepts Jessaline's advances. Their daydream of a life together is a funny and heartwarming.

Although the end of the story is rather anticlimactic and more enjoyable to read than to listen to, The Effluent Engine is an intelligent and much-needed story of Black excellence and historical same-sex attraction.