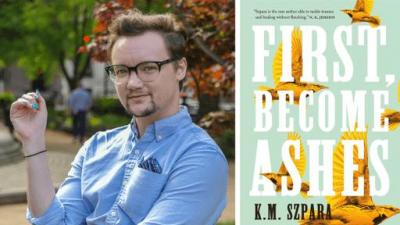 K.M. Szpara wields fantasy and imagination to tackle traumatic origins and highlight the nonlinear nature of healing for the protagonists of this queer mini-epic. In a skillful brew of queer pop culture and low fantasy, two different earthly worlds combine for "a fucking quest" that readers won't find anywhere else.

First, Become Ashes sets out on an enthralling, unsettling, and occasionally steamy journey that we might all be able to relate to in some way, led by four protagonists in narratives from the past and present.

The novel begins with a short-lived vignette of life in the Fellowship of the Anointed's commune, where Lark and Kane have one goal thus far: to harness magic in preparation for their "mid-century" quests at age 25, in which they will slay monsters in the outside world and convert the rest of humanity to believe in their cult's abusive leader, Nova. Their magic training in The Fellowship has involved both enduring and inflicting severe pain at Nova's command, and so their narratives are marked by trauma. After one of their confessions leads to infiltration by the FBI, which steps in to take down Nova, they are thrown into the outside world, and both of their lives completely unravel.

Deryn, on the other hand, serves as a "fellow" on the commune, constantly undervalued in comparison to Lark and Kane. Deryn is on a separate quest for self-worth and discovery as they leave the commune with an openness to a new world where fewer limitations will be placed on them.

Our fourth protagonist, Calvin, might sound more familiar (or more boring, depending on the reader). He first appears as a LOTR cosplayer getting ready for a convention. He lives in Baltimore and has an avid Patreon fanbase. His desire for fantastical adventure is rooted deep in him already when he meets Lark and becomes invested in his magic quest to find a monster and slay it.

Throughout the plot, Lark's journey to truth and healing remains stubbornly faithful to the world he knew. This loyalty to his cause is contagious for Calvin, and they form one of many thoroughly enjoyable character combinations-like a D&D party on a campaign.

There becomes a clear arc in Lark's character development, as his trauma response shifts from pure masochism and denial of pleasure and joy to eventual, though reluctant, trust through the unforeseen companionship of these "outsiders" on his quest.

Each of these narratives are arranged in a thrilling manner that keeps the reader vying for answers throughout, though some chapters are not appropriate for everyone, as traumatic pasts are integral to characters' overall transformation.

Published January 26, 2021, First, Become Ashes makes the thus-far short list of American literature mentioning gender pronouns and gender beyond the binary. It also hints at the power of the mind and reflects a universal yearning for truth, belonging, and magic.