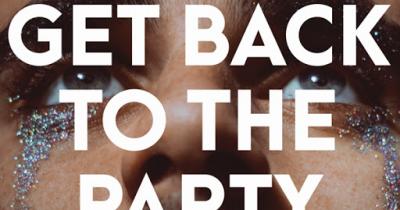 The place is filled with balloons.

They're floating near the ceiling, strings just out of reach for now, some on the floor. The lights seem to be on a "twinkle" setting, and there are candles carefully nestled in centerpieces, so the entire room sparkles from corner to corner. The guest of honor isn't there yet, but you are, and in Let's Get Back to the Party by Zak Salih, you already wish you hadn't come.

Sebastian Mote hadn't seen Oscar Burnham in a decade, not since they were kids, but the guy across the room at the wedding reception sure looked like Oscar. If it was, Sebastian wondered if Oscar would remember him, or their once-close friendship, or afternoons together in the basement and the things they did to one another.

Oscar Burnham was truthfully more interested in a cruising app than he was in rekindling a boyhood friendship. Sebastian was every bit as boring as Oscar remembered; he was probably one of those queens whose only focus, now that gay marriage was legal, was to have a husband and a bunch of obnoxious kids. It irritated Oscar that he was forced to exchange phone numbers with Sebastian, and lame promises to hang out soon.

Soon. More like not-soon, since Oscar was busy with someone he met when an app date didn't show up. Sean Stokes was an older man, a writer, and though Oscar professed to dislike reading, he was captivated by Sean's explicit tales of queer life before Oscar was even born. He couldn't get enough of Sean - and vice versa, apparently, because Sean asked for Oscar's stories, and it eventually became clear that Sean's next book would be about Oscar.

There was no denying that Oscar's ghosting hurt Sebastian, but he rather expected it. Instead, he threw himself into a friendship with a young student at his school, daring to let himself become obsessed with seventeen-year-old Arthur. It was painful, hopeful, and something he could never admit to anyone else.

Least of all, his boyhood pal, Oscar...

At first browse, Let's Get Back to the Party can seem long and very wordy. It hangs on the lives of two men who are mostly not very likable, to themselves or to one another, and how they hold on to their history with fingernails on one hand, pushing each other away with the other hand. You'll want to shake them, but the thing is, it's hard not to want to watch them make their own lives worse: this novel is a little schadenfreudey, but with a degree of sympathy.

The sympathy wins, as author Zak Salih shows sides of both Sebastian and Oscar that neither character would admit, and reasons why each becomes contemptuous [of] the other. The truth, for one of them, is a devastating shocker that slams the brakes on the tale but alas, getting there takes awhile; you'll want to ride that wave to this books' fitting end.

And in that end, Let's Get Back to the Party really pops.