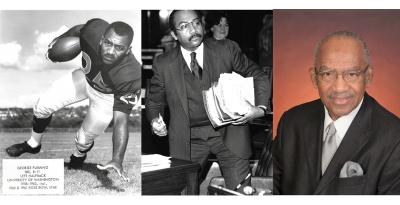 Seattle (December 8, 2021) - The family of Senator George Fleming and officials from across the state mourned the passing of a groundbreaking state senator, civic leader, and an accomplished football player.

"It is with great sadness that we announce that former Washington State Senator George Fleming passed away peacefully at his home in Seattle surrounded by family at the age of 83. Fleming led an incredible and awe-inspiring life that was dedicated to public service and advocacy for the?underrepresented. For twenty-two years, he represented the 37th District, first in the Washington State House of Representatives for two years, then in the State Senate for twenty years, during which time he held the highest-ranking member-elected position of Senate Democratic Caucus Chairman for over a decade. Fleming was also an accomplished football player and star of the 1960 and 1961 Rose Bowls, including co-MVP of the 1960 game and member of the 1960 National Championship team, followed by stints with the Oakland Raiders of the American Football League and the Winnipeg Blue Bombers of the Canadian Football League. Fleming was inducted into the University of Washington Hall of Fame in 1980, named a Husky Legend in 1998, and inducted into the Rose Bowl Hall of Fame in 2012. Fleming's most cherished role was lovingly raising his two daughters, Sonja and Yemi, with his wife, Tina, of 54 years, and spending time with their five grandchildren, all of whom will miss him dearly," said the family of George Fleming, which includes his wife Tina and their two daughters, Sonja and Yemi (and son-in-law Rodney) as well as five grandchildren, Arica, Chris, Micah, Myles and Nyah.

"George Fleming was a close mentor and a once-in-a-generation kind of leader. When I was first elected to the State Senate?he was a colleague I could always count on. I saw up close and personal how he always worked for what was right—whether it was leading the effort to make Martin Luther King holiday a reality in Washington state, or championing ADA accessibility. He fought for his beliefs and his constituents. He was a champion on the gridiron and in the halls of the Washington State Legislature. He touched so many lives and he will be missed by so many—including?me. I was deeply proud to call George a friend—my thoughts are with his family, friends, and everyone who loved him," said United States Senator Patty Murray.

"George Fleming was one of my childhood heroes scoring touchdowns in the Rose Bowl as a Washington Husky, and he was a hero to me in adulthood as he became a tireless public servant in the Legislature, where he served for 22 years. George was a scion of integrity and empathy in both his work and his personal life. Washington state and everyone who knew him will sorely miss his wisdom," said Washington State Governor Jay Inslee.

"Mike and I were saddened to hear of the passing of Washington Senator George Fleming. I came to know Senator Fleming as a lawyer in the Attorney General's Office and later when I served in Governor Gardner's cabinet. Senator Fleming's commitment to working to improve the lives of all Washingtonians is an example that all elected officials can follow. He continues to inspire me today. May he rest in peace and may his family take consolation in his many contributions to our community," said former Washington State Governor & Challenge Seattle CEO Chris Gregoire.

"George Fleming has always been my hero—from my childhood days listening on the radio to his record breaking exploits as a Rose Bowl champion Husky football player to our years together in the State Legislature. ?He was a trailblazing leader of civil rights and was the conscience of the Legislature. ?He was the leading force behind so many transformative laws in our state. ?He gave voice and power to the forgotten and overlooked—everyday working people. ?They just don't make them like George Fleming anymore," said Former Washington State Governor, Gary Locke.

"Yesterday my mentor passed away. He was a true teacher in every way. My career as an elected official was shaped and molded by his advice and example. My faith encourages us to understand and appreciate the gifts in our lives. Upon reflection we discover and rediscover those events, friendships and mentorships that sculpted our lives. My mentor will always be more than a memory. He demanded that I work hard and acquire the skills that opened the doors to my career. He is now with the angels in Heaven, but he will always be with me. Peace Be With You." Ron Sims, Former King County Executive and former Deputy Secretary of the United States Department of Housing and Urban Development

"George Fleming was a leader that broke so many barriers and was beloved by our Seattle community. He played football for the University of Washington Huskies and then the NFL. Following his football career, George was elected to the Washington House of Representatives then made history as the first African American to be elected to the Washington State Senate. ?He served in the Senate for 20 years and was a tireless champion for education,?housing?and civil rights. Few could match his generous spirit, love for community and sense of great style. ?He will be greatly missed. ?A good friend of my father - I am proud that in recent years I too got to call him 'friend.' Our city sends our condolences to George's remarkable family, friends, and colleagues," said Seattle Mayor Jenny Durkan.

"We lost a trailblazer and warrior in our loss of George Fleming. As he rose from Husky football stardom and worked in telecommunications and served as a successful politician, he forged a trail of success that I followed. He never hesitated to help me,?advise?me?and inspire me. I was proud to be his friend and a beneficiary of his life of service," said Seattle Mayor-Elect, Bruce Harrell.

"Uncle George was the blueprint for so many aspects of my life. He was my example of being a husband, a father, and an elected official. So many times, I've said that if I can contribute even half of what he has contributed to our state, I would be proud. His legacy endures not just in the legislation he passed that continues to positively impact people today, years after his retirement. But in the example, he was for many people, especially African Americans. His imprint on this state will live forever," said Councilmember Edward Prince, City of Renton and Executive Director, Washington State Commission on African American Affairs

"The University of Washington community is saddened by the passing of George Fleming, an esteemed?alumnus?and distinguished leader who represented the?very best?of what it means to be a Husky. A UW football legend who became a state representative and then the first African American to be elected to the Washington State Senate, he fought hard to build a more inclusive community for all. He will be missed, but his legacy lives on all throughout the UW community and across our state," said Ana Mari?Cauce,?President, University of Washington.

"Our Husky community is mourning the loss of the remarkable George Fleming. After fulfilling his dream of playing in the Rose Bowl, George — who was one of the most impactful players of his era — was later named to the Rose Bowl Hall of Fame for helping the Huskies make multiple trips to Pasadena. His impact stretched far beyond the football field as George made our community and state better. He used his platform in politics to be a role model and advocate for the underprivileged. George was a true champion both on and off the field and he will be dearly missed by his Husky family. My heart goes out to his wife, Tina, and daughters, Sonja and Yemi," said Jen Cohen, Director of Athletics, University of Washington.

"We honor?Senator George Fleming, a remarkable hero who was decades ahead of his time. ?Long before the current housing and homelessness crisis, he recognized the importance that affordable housing plays in the everyday well-being of people and the communities we live in. He?established?the State Housing Trust Fund which became a national model for enabling people to access housing they can afford. This is why?we named LIHI's new building George Fleming Place," said Sharon Lee, Executive Director, Low Income Housing Institute.

"Years from now, people will still be realizing the enormous impact that Sen. Fleming had on this state: The lives he made better; The businesses he created; The jobs he made available; but most importantly, the human beings that he brought together. All races, colors?and creeds, he saw the need for us to live as one in God's Beloved Community," said Nate Miles.