Remembering those we lost: The AMP Project 2021 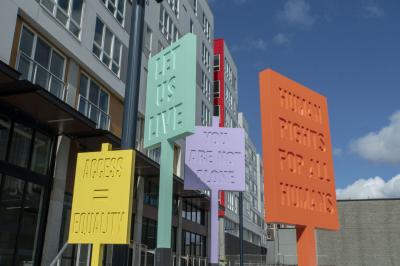 What do these people have in common?

Each of these names belongs to a person who lived in Washington state who died from HIV.

But the similarities don't stop there. Mark, Keith, and Hiram all had lives they should have been able to live to the fullest. They each have an important story, and they each have loved ones they left behind.

One of those loved ones is Chukundi Salisbury, the younger brother of Hiram Salisbury. Remembering his brother, Chukundi said, "He loved to do his hair. Loved to dance, to laugh, and to cook for his family. He loved life." Hiram died from HIV in January of 2005.

Through The AMP Project: AIDS Memorial Pathway, Chukundi has been able to channel his grief into a way to remember his brother and the hundreds of others who have lost their lives to HIV/AIDS. Chukundi, who is a Black, cisgender male ally to the LGBTQ community, believes this project is especially important in the age of COVID-19.

According to the Center for Infectious Disease Research and Policy (2020), "Black Americans are infected with COVID-19 at nearly three times the rate of white Americans" and twice as likely to die from it.

Highlighting and remembering people, such as those above, has been what The AMP has been working toward since 2015. It was created by a passionate group of community leaders and volunteers, including people living with HIV, people of color, and LGBTQ community members. It has three goals: to use public art to create a space specifically for reflection and remembrance, to use technology to share stories of the epidemic and the diverse community response to the crisis, and to provide a call to action to end the stigma and discrimination that surrounds HIV/AIDS.

The project got its start in 2015, when Seattle City Councilmember Tom Rasmussen was finishing his last term and dreamed that a portion of the city's planning money could be used to create a memorial to educate the public on the history of the AIDS crisis in Seattle. With the help of Leonard Garfield, executive director of the Museum of History and Industry, which acted as a sponsor, the City contracted with MOHAI for a planning study. After confirming the location - an area newly developed around the Capitol Hill Light Rail Station - the planners were excited that The AMP would "be in a neighborhood long considered to be the heart of the LGBTQ community, and one greatly impacted by HIV and AIDS."

After collecting fiscal sponsors, recording the stories of those impacted by HIV/AIDS, selecting the artwork that will be featured, and awarding grants (through the state Department of Commerce, King County, 4Culture, the Seattle City Council, and the Mayor), the project was finally able to move into fabrication and installation. However, the pandemic moved the completion date from the end of 2020 into 2021.

The artworks
The pathway will have four exhibits. The first will be andimgonnamisseverbody, located in the central plaza. This will be a 20' x 20' sculpture, created by the artist Christopher Paul Jordan, acting as a portal into the spaces of "radical gathering, hospitality, celebration, and care that have arisen throughout the history of AIDS" (the descriptions are adapted from theamp.org).

The next stop is We're Already Here, located in three different locations in the plaza and the park. These pieces are a series of tableaus by Civilization that mimic protest signs and their messages in order to evoke historic and iconic moments of public convergence. They will be strategically placed to help lead visitors through The AMP.

The Ribbon of Light, located in Cal Anderson Park, comes next. This piece, created by Horatio Hung-Yan Law, will be three human-size laminated glass sculptures placed along a landscaped path next to the main trail. These pieces were inspired by poets who were impacted by the HIV/AIDS epidemic.

The last stop, In This Way We Loved One Another by Storme Webber, will be placed in the Cathy Hillenbrand Community Room in the Station House Building. This piece is dedicated to restoring the far-too-long-absent narratives of working-class people of color and women who have been living with and dying from AIDS, through visual storytelling and text. Because of these portraits, viewers have the opportunity to discover the ways in which everyday people have found collective power in unity and have made change together.

Other efforts
There is currently an augmented-reality app being developed by Novaby that will accompany viewers through the entire pathway. The app will be used to access interactive experiences as well as additional information related to HIV/AIDS in our region.

A huge and important part of The AMP project has been to collect the history of HIV/AIDS in Seattle, King County, and Washington state. These stories include those of organizations and individuals alike. The project hopes that by sharing these stories in the collection, it will be able to promote historical awareness and education, as well as encourage empathy and help eventually end the stigma and discrimination surrounding HIV/AIDS.

If you have a story to share, go to theamp.org for more information. If you have a name that you would like to add to help The AMP in its efforts to remember those connected to Washington state that have been lost to HIV/AIDS, go to same website to do so.

Although HIV/AIDS is not curable at this point in time, it is treatable. With increasing access to HIV/AIDS prevention, diagnosis, treatment, and care, it has become a manageable chronic health condition. Thanks to these medical discoveries, people living with HIV/AIDS are able to live long, healthy, and full lives.

Final stretch
The AMP Project Manager Jason Plourde, who has been working full-time to bring this project to life since 2018, said, "I have been blown away by the near-universal acceptance for this project. Everyone we have spoken to has been very supportive, generous with their donations, and constantly thinking about how they can help." Through this project, Plourde and the huge team of committee member volunteers hope "not only to memorialize the epidemic but to show how its history is relevant."

The project is in the final stretch and will be open for public viewing in June 2021. To get to that point, it is down to raising the last $35,000. Those who donate will make it onto the contribution wall and will ultimately help bring this project -years in the making - to the finish line. The project will host a debut event in the afternoon of June 26 (details pending), during which viewers will be able to tour the artwork and speak to its creators. To donate to The AMP and help in its quest to remember those lost to HIV/AIDS and in their mission to educate the public, go to theamp.org.