Justice Ginsburg remembered as a passionate advocate for equality 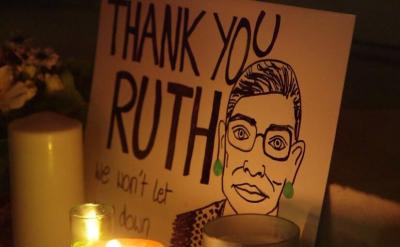 Supreme Court Justice Ruth Bader Ginsburg died Friday, September 18th, at the age of 87-years-old. During her 27 years on the nation's highest court, she championed a variety of progressive legal issues ranging from women's rights to Lesbian, Gay, Bisexual and Transgender equality.

Justice Ginsburg notably joined the majority opinion in every major decision on LGBTQ rights: Romer v. Evans, Lawrence v. Texas, Windsor v. United States, and, most notably Obergefell v. Hodges, which extended the institution of marriage to all couples — regardless of sex. Ginsburg more recently joined the majority opinion in Bostock v. Clayton County, which found discrimination against LGBTQ+ people in employment to be illegal under Title VII of the Civil Rights Act.

"I was sad to learn of the death of Justice Ginsburg because she will leave a gaping hole at the United States Supreme Court; she was a true champion not only for gender equality, but for the idea the law plays an active role in building that more perfect union," Washington State Supreme Court Justice Mary Yu, the first LGBT person to hold the post, told the Seattle Gay News this week. "Justice Ginsburg saw us (those not always included in the law) and was not afraid to say out loud in her opinions that she saw us and recognized our rights. Her dissent in Ledbetter v. Goodyear provided a glimpse into that determination to do right and to provide those without power a path to seek redress and justice."

Washington State Supreme Court Justice Helen Whitener agreed, speaking frankly about Ginsburg's influence not only on the law but on the rights of marginalized groups. "Trailblazers like Justice Ginsburg made it possible for two Queer women Justices to be sitting on the Washington State Supreme Court," concluded Whitener, who was appointed by Governor Jay Inslee last April and was the first black LGBTQ+ judge in Washington state. "Justice Ginsburg demanded that women not only be seen but that they also be valued. Now, more than ever, it is important that those entering the legal profession remember her words: 'Fight for the things that you care about, but do it in a way that will lead others to join you.'"

"Justice Ginsburg's service and accomplishments to our nation as a lawyer and scholar on gender equality and women's rights are unparalleled and historic," said Balducci. "As co-founder the Women's Rights Project at the American Civil Liberties Union, she helped lead the fight against gender discrimination and as a practicing lawyer, her contributions to advance the rights of women under the Equal Protection Clause of the U.S. Constitution last to this day.

"As a Justice, her strong, principled and unwavering positions have inspired me personally to stand up for what is right. I mourn her passing and take solace that her legacy will continue as we collectively work to advance the work to make a more just and equitable society."

Likewise, U.S. Representative Adam Smith (WA-9th) added that Ginsburg "was an exemplary beacon of justice" whose "leadership and honorable service have shaped countless lives for the better, and we are a stronger, more just nation due to her jurisprudence."

"No words can accurately portray the monumental impact she had on our justice system or describe her profound dedication to our nation even until her very last moments with us," Smith said. "We mourn the loss of her today, but we continue our fight for justice tomorrow. I extend my deepest condolences to her and her family and my sincerest gratitude to Justice Ginsberg — may she Rest in Peace."

The passing of Justice Ginsburg could not be felt more succinctly than in the U.S. Senate, which will be tasked to vote on her successor. President Donald Trump has stated he plans to name Justice Ginsberg's successor promptly. However, U.S. Senators Patty Murray and Maria Cantwell from Washington say that they will fight to ensure a new pick will only be appointed after the next Presidential election on November 3rd.

"Ruth Bader Ginsburg was the first Justice I voted for," Murray said. "Tonight, my heart is breaking for a million reasons — for her family, for our country, for my North Star. I'll remember her as a friend, a role model, and a woman who opened doors for all the rest of us with her genius and her relentless pursuit of justice, freedom, and equality for each and every one of us, no matter who we are," said Murray. "That fight for justice, which she led so passionately for so long, is now ours to take up in her memory. Ruth Bader Ginsburg gave her all to us, and I will give mine to making sure the American people have their next President before her seat is filled."

Maria Cantwell stated that Justice Ginsburg was "a giant — our longest-serving female Supreme Court Justice" who will be "remembered as a fierce warrior against gender discrimination."

"Every woman who has ever had to advocate for the law owes her a great debt of gratitude. We have lost a real hero," said Cantwell. "Justice Ginsburg stood by the most vulnerable in her decisions, from ending single sex admission policies and protecting rights for those with mental disabilities to her dissents standing up for voting rights and paving the way for Congress to pass the Lilly Ledbetter Fair Pay Act, which strengthens protections against pay discrimination."

Local organizations, such the Pride Foundation also remembered Ginsburg. "Throughout her life, Ruth Bader Ginsburg showed the impact that one person can have in the fight for justice," wrote Katie Carter, Pride Foundation CEO, on its website. "While all of us have different roles to play in this fight, she is proof that we all can find ways to leave the world better than we found it.

"Today, we honor the impact, the legacy, and the life of Ruth Bader Ginsburg — and we can do it best by each committing to do more in this fight."

Tina Podlodowski, openly-LGBT+ Chair of the Washington State Democratic Party and a former openly-LGBT+ member of the Seattle City Council, also issued a statement regarding the news of the death of Justice Ginsburg. "Justice Ginsburg will go down in American history as one of the fiercest advocates for civil rights and equality under the law that we've ever been blessed to serve us in public life," she said. "...[T]he work of fighting to protect the rights Justice Ginsburg enshrined in decisions issued from the highest court in the land must continue. The security of so many Americans' reproductive rights, right to marry whomever they love, and the fundamental right to be treated as equals in our society should never have rested on the shoulders of a five foot tall, 87 year-old giant of American jurisprudence.

"We must recommit ourselves to ensuring America lives up to the vision of a just society Justice Ginsburg brought to life in both the decisions she authored and the example she set for women everywhere. May she rest in peace."

Justice Ginsburg was born in New York in 1933 to Jewish parents with roots in Eastern Europe. She went on to Cornell University, where at 17, she met her future husband, Martin Ginsburg. She began Harvard Law School as a young mother to her daughter, Jane, and one of only nine women in her class. Later, she transferred to Columbia Law School, graduating first in her class. She accepted a position teaching civil procedure at Rutgers Law School. It was there where she welcomed her son, James, into the world. Ginsburg joined the ACLU in 1972. While at the ACLU, Ginsburg played a role in 34 Supreme Court cases, and won five of the six cases she argued before the court, according to the ACLU. President Bill Clinton nominated Ginsburg to the court in 1993, where she filled the role as an associate justice and — over the decades — became a cultural icon.

"As a fellow judge, I especially appreciated her relationship with Justice Scalia," recalled Justice Yu. "I know how hard it is to befriend someone around a table of 9 who is ideologically opposite. Her civility and plain decency is what we all need to emulate. When we disagree as Justices, we write dissents and she taught us how to do so with passion and conviction."