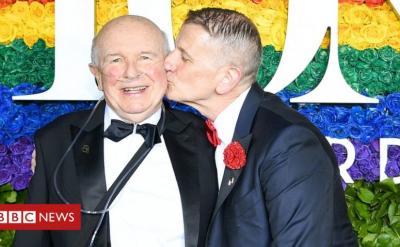 The news of the passing of celebrated Broadway gay playwright, librettist, and screenwriter Terrence McNally, due to complications from the COVID-19 virus, has hit the theater community hard. Many notables have taken to social media with their response to losing one of the finest playwrights of the century.

Brokenhearted to read this. Terrence, after fighting so long and bravely against illness, has succumbed to a complication from coronavirus. But let's always remember that Terrence was anything but a victim. He was a lover and fighter and an artist and a voice for our people. He was a victor. The man didn't write his heart out. He wrote OUR hearts out! Whether he was making us laugh with THE RITZ or cry with CORPUS CHRISTI or gave us a little of each with LOVE! VALOUR! COMPASSION!, he was true to his vision. Bravo, Terrence. Bravo! — Harvey Fierstein

Terrence McNally, [you] made the world more beautiful, civilized, intelligent and gentle. Honored to have known you. — David Mixner

Terrence McNally, I'm so heartbroken this took you. You are one of the great ones. Thank you for giving me my first Broadway show. I always said it was all downhill from there. LOL. That's how great you are. I was so lucky to know you and that I got to speak your words. Love and thanks and tears. — Mario Cantone

Here's one more quote: He was my sky, my moon, my stars, and my ocean. — Tom Kirdahy, husband of Terence McNally. I never interviewed McNally, but I did get a chance to chat with Jeff Kaufman, the director and producer of Every Act of Life, at the 2018 Seattle International Film Festival. His documentary about McNally made its debut on the PBS series American Masters this past June. [https://www.pbs.org/wnet/americanmasters/american-masters-terrence-mcnally-every-act-of-life-about/10986/] This interview has not been published until now.

MK Scott: Your documentary, Every Act of Life, was great because it really focused on Terrence McNally, probably one of the biggest playwrights there is in the gay community.

Jeff Kaufman: Well, I'm so glad you could see it. And, you know, Terrence is in some ways an unacknowledged pioneer for LGBTQ progress and literature. But he's also a very universal playwright, who through his humanity and through his sense of his characters' vulnerability, makes every character, straight or gay, reach out beyond themselves to others.

MK: And actually, besides just plays, he did a lot of books for musicals as well. The only other person I can think of that who actually has done that, and done so successfully, is Harvey Fierstein.

JK: Yeah, I mean, I think there are others who have tried to go there, but less successfully. I could think of somebody I won't mention. But, yeah, it's really interesting, because it's the flipside of the playwright's ego — going from having your own vision and everyone being there to serve your vision to using your skill to serve a shared vision. And that's tough. But think about it he wrote the books for The Rink, Ragtime, Kiss of the Spider Woman... I'm going to leave something out... Man of No Importance, which is a wonderful musical that's sort of been neglected.

MK: And Catch Me If You Can, which premiered at the 5th Avenue Theatre in 2009.

JK: Also The Full Monty. And Anastasia is on Broadway now; it's been running for almost two years.

MK: That's not bad at all. And of course, I've seen a lot of his shows, since The Lisbon Traviata. One thing that was really surprising that I did not know is that he was originally from Corpus Christi.

JK: Yeah, from southern Texas, as conservative as can be... how nice to be born into a city that's called "Blood of Christ," you know? It's like, if you're a writer, you have to address that at some point. But also, if you think about it, here he is...a young gay man, both confident and not confident in himself, in southern Texas, in one of the most conservative states in one of the most conservative times of this country. And yet he always felt it was important to be himself. And I think that's a universal message that connects now.

MK: I think probably the first of his creations I saw was actually the movie version of Love! Valour! Compassion!

JK: Yeah. There's a beautiful thing that Terrence does at the end of Love! Valour! Compassion! both in the play and in the film, where, you know, you've experienced this journey with these characters — and they're so personal — and then all of the sudden he tells you what their fate is. These two guys, they don't make it. Everybody has an end to their journey. And he shares it all with you in the most poignant way. It's Terrence's way of sort of both being in the moment and looking down at the moment at the same time. It's a very intense and poetic touch. But that's Terrence.

MK: So one thing I found quite interesting. He was in a lot of relationships with a lot of notables (e.g., Edward Albee, Robert Drivas). And then after all that, he has now found true happiness and true love with Tom [Kirdahy].

JK: How wonderful, isn't it? Tom is an amazing guy. And you know, when you share Terrence's journey through the film, how wonderful it is to go from a very complicated relationship that was not about communication or sharing or trust... to someone who he has all that with. Tom is a super smart former AIDS activist lawyer who is now a fabulous theater producer. But he's also someone of real ethics and has a great heart. And you just kind of glow when you see them together. It's a wonderful thing.

MK: You also go into a little bit about his alcoholism.

JK: Yes. Both of Terrence's parents were terrible alcoholics. And he went through a lot, and we don't even express everything in the film that any child who goes through that has to survive, if they're lucky. And his first two major relationships with Edward Albee and then with the actor and director Robert Drivas were also fueled by — and complicated by — lots of drinking.

But Terrence sort of hit a wall, and through the intervention of Angela Lansbury — and luck — he was able to break that pattern and stop drinking. And I think it's interesting that [it deepened] his plays and [took] his plays to a whole new level after he stopped drinking. It's a powerful testament to taking care of yourself.

MK: I love the little story that Angela Lansbury was there for him, to tell him to pick up his life.

JK: Isn't it interesting? I think, you know, it's funny how you could love Angela Lansbury for Anyone Who Can Whistle or Sweeney Todd or Manchurian Candidate or Murder, She Wrote, but there's something lovely about respecting her for this very small gesture, this very small human gesture, where she steps outside of herself to reach out to someone she doesn't even know that well, to beg them to take care of themselves. And ultimately, in a way, that's one of the messages of the film Every Act of Life. Every act that you do is what you're judged by. I could attest that Angela is a wonderful person, but it's nice to have that small legacy that actually changed someone's life.

MK: You feature a lot of other people besides Angela Lansbury. You have Rita Moreno. You even have Meryl Streep.

JK: That's right. Obviously there's Nathan Lane and Audra McDonald and Chita Rivera, and I can go on and on. So many fabulous actors and actresses and directors.

We went down to the Ransom Center Archive in Austin, which hosts his papers. (They also have the papers of Arthur Miller and they have one of the original Gutenberg Bibles, it's an amazing place!) And we found two letters that were just amazing. One was this letter to Terrence when he was just 17 and heading off to New York City, from his beloved high school English teacher, Mrs. McElroy, who really changed his life. In it she talks about his work and what it means to be a writer, and what it means to be true to yourself. She even has some perceptive comments about some of the issues in his writing that critics talked about in the years following. But it's really about also being true to yourself and finding yourself. It's an amazing piece. And Meryl is wonderful as the voice of Mrs. McElroy, and all teachers everywhere. We also have a letter from John Steinbeck, read by Bryan Cranston, who just nailed it also. He should quickly play John Steinbeck. Yeah!

MK: Tell me, in regard to your interviews with all these wonderful stars, which one was your personal favorite?

JK: There wasn't one, really, honestly. What can I say? How can I choose? It's interesting, because of my producing partner, who I got married to halfway through this process —

JK: Thank you — is Marsha Ross, who is also a well-known casting director, but Marsha started her whole career by living in Mount Vernon and going to the theater in New York City and seeing these people onstage. And it was an amazing experience for her to then be in this process [making the documentary], where she was meeting all the legends of her life at the same time.

Theater has always been important to me, but so have film and art and what the arts can do. So to see these people who were at the top of their game and so talented — and they have such an amazing work ethic, and they're so dedicated to their work, and they're so focused on making the next project their best project — is an amazing thing.

We have a book based on the film that will come out in October. And in the book, Christine Baranski says — we didn't fit it in the film, but she says that she always wants to make her work simpler and truer, something like that. And I think that's a lovely message. Yeah, I love the fact that you could be at that level and still push yourself to something better.

The way we got to know Terrence and Tom was that we did a film about the origins of the marriage equality movement in Vermont and how three then-unknown lawyers came up with a social and legal and political strategy to push marriage equality when people thought they were nuts. And one of them was Mary Bonanno, who went all the way to the New York Supreme Court...

It was during that process that we first met Terrence and Tom, because [they] had their civil union in Vermont, which was the most married you could be at the time. And we wanted to incorporate that kind of story, so you saw how it affected so many lives. And I was just knocked out by how, you know, one of America's greatest play writers, someone who could be high on a perch and look down on you, was so vulnerable and open, and spoke so directly about love and vulnerability and what Tom meant to him.

And so I realized that there are thousands — hundreds of thousands — of people around the country now who are vulnerable for one reason or the other and need to have a way to find themselves. And I think you find yourself through mentors and the examples of others. And I think Terrence, whether you're gay or straight, or in New York or in Texas or Alaska, I think his sort of courage and his determination to be true to himself is a wonderful inspiration.