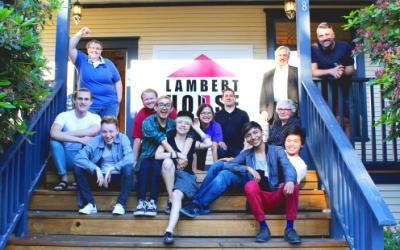 Seattle has lots of resources for LGBTQ+ adults, but every confident Gay grown-up was most likely once an awkward or lonely Gay teen. And Lambert House has been helping to turn awkwardness and loneliness into confidence and community since its beginnings in 1981.

Lambert House is nationally respected as a safe place for Lesbian, Gay, Bisexual, Transgender, and questioning youth aged 11-22. The local nonprofit believes that the best way to prevent LGBTQ+ youth from experiencing many of the risks that disproportionality affect them - such as depression, suicide, homelessness, social isolation, alcohol and other drug use, and HIV and other STDs, among other things - is through youth community building.

Since the start of the coronavirus pandemic, it has moved its mission online, including its dozen or so discussion groups, such as the Friday Queerantine, the Tranz Youth Group, and the Boys Who Like Boys Group.

Although doing so hasn't been ideal, it has been necessary.

Ken Shulman, Lambert House's executive director said, "Necessity is the mother of invention, and we felt that it was more important than ever to keep LGBTQ+ youth socially connected while they were socially distanced."

Since going online, Lambert House has been working hard to keep local LGBTQ+ youth connected in this time of isolation. What the staff didn't know was that doing so would expand their programming all over the United States and out into the broader world. Since the pandemic began, Lambert House has served young people in 26 states and five countries.

LGBTQ+ youth, no matter where they are located, often feel isolated and alone. Whether they live in rural Minnesota or Saudi Arabia, being a LGBTQ+ young person can be not only difficult but dangerous. As Shulman said, "The world is still not safe for LGBTQ+ kids." Which is why the resources that Lambert House offers online have been so vital to youth around the world, even what Shulman calls "lifesaving."

As the hope of returning to in-person activities rises on the horizon, non-local youth are worried that these online resources they have grown to love and come to rely on will no longer be available to them. But Shulman and the other dedicated staff and volunteers of Lambert House aren't going to let that happen, Shulman said: "We are planning to continue online programming and are in the process of deciding what that looks like."

A history of serving youth
Lambert House has an amazing history, starting in 1981, when the organization officially became a nonprofit, receiving its 501(c)(3) status as the Association of Gay and Lesbian Youth Advocates. AGLYA was the first social service organization 100% dedicated to LGBTQ+ youth to receive nonprofit status from the IRS.

In 1991, AGYLA found its permanent home in an old Victorian house located in Seattle's favorite "gayborhood," Capitol Hill, at 1818 15th Avenue. In 1993 AGLYA was renamed Lambert House after a local LGBTQ+ youth advocate, Gray Lambert, who died in August of 1991 of HIV/AIDS-related complications.

In a typical, pre-COVID year, Lambert House hosts many in-person events and drop-in visits by local youth. In 2019, the last year still totally in person, Lambert House served 1,317 LGBTQ+ youth from 132 different ZIP codes, mostly in Washington state, and from all different walks of life.

Out of these, 107 were homeless. With the help of local nonprofits and shelters, Lambert House was able to help LGBTQ+ youth living without shelter stability. When homeless youth go to Lambert House, they are given a list of what Shulman refers to as "LGBTQ+-competent organizations," places that make sure they are not targeted and harassed by other residents.

Building community
One of the ways Lambert House has built community in the past is by offering its own high school prom, an alternative to school-based ones, which have notoriously been anti-LGBTQ+.

When the event started in 1998, bringing a same-sex date to prom was not socially accepted or even allowed at some schools. Since then, some schools have become more inclusive, but there is a difference between allowing youth to bring same-sex dates and making LGBTQ+ youth feel comfortable and accepted. Which is why Lambert House has continued the legacy of hosting the annual event called the Pink Prom, which guarantees safety to and inclusivity for all in attendance.

As is evident in its track record, Lambert House has a long legacy of making a huge impact in the lives of LGBTQ+ youth in the Seattle area. Now, it has a future of helping young Gay people all over the US, and even the world.

Because the mission and reach of Lambert House has grown so much in the last year, its need for volunteers and funding has also grown. To learn more about how to become a volunteer or donate, or about its events and programming, go to lamberthouse.org.