The sculptor upending the business of amputation 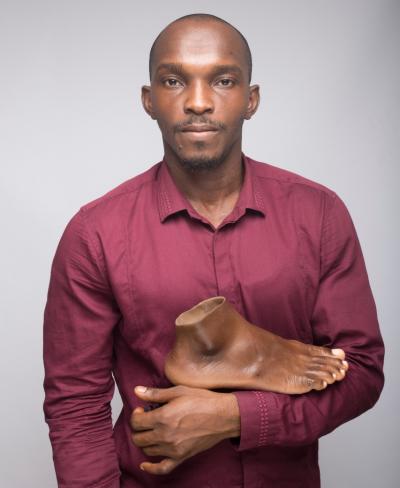 There are around 2.1 million people in the United States alone who are living with a missing limb. As many as 500 amputations are performed in hospitals daily, equaling about 185,000 people a year - and that number is projected to double by 2050. Amputation has become a business unto itself, incurring hospital costs of $8.3 billion according to recent data.

The drastic difference in the quality of healthcare received by the Black community means that they, as well as other racial minorities, are more likely to have doctors advise them they need an amputation than other patients. Recent research into disparities among Black fee-for-service Medicare beneficiaries with diabetic foot problems has documented that Black Americans are about four times as likely to have an amputation as their white counterparts.

It is almost as if the Black community is being specifically targeted by doctors to keep this profitable industry thriving - ignoring the fact that half the patients with vascular disease-related amputations die within five years, and disregarding the more than $100,000 increase to these patients' lifetime healthcare costs.

But at least this demand must have created a diverse selection of amazing prosthetics for the steadily increasing numbers of Black amputees, right?

Even with the Black community as the primary customers, the global industry of prosthetics and orthotics (valued at about $6.11 billion in 2020) provides few prosthetics that cater to Black skin tones.

In fact, when you search for a prosthetic company that provides products for Black patients, only one name comes up. Every variation on keyword searches for Black prosthetics leads to the same place: Immortal Cosmetic Art.

About three years ago, Nigerian sculptor John Amanam (who was also a movie special effects artist) decided that this lack of supply for the Black amputees of the world needed to change. He took the discomfort and humiliation in the faces of these individuals with their unrealistic or obviously foreign limbs as a personal challenge.

After seeing the options available for his cousin, who had had an accident involving his fingers, Amanam was inspired and began designing hyperrealistic Black prosthetics.

"You rarely find people with Black skin prosthetics. I want this need to be met within Africa. I want to reach out to blacks all over the world as well, by making this process accessible, at an affordable rate," said Amanam.

In an industry where prosthetic limbs range in cost from $10,000 to $100,000, Amanam offers his customers top-quality medical-grade products for as low as $689 for artificial legs or arms, and $96 for minor body parts.

He sees this as a chance to ease their emotional trauma and rebuild their confidence, having chosen to dedicate himself to making a difference for them, to be on their side, thousands of miles away, while their own system exploits them.

"I just want them to feel at home and be whole, aesthetically."