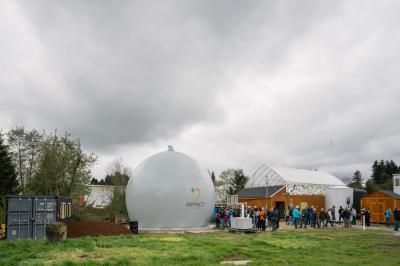 After being led through a thicket of blackberry bushes, walking just above the mud on makeshift wooden trails, I looked up to find I had arrived at the site of a climate solution unlike any the world has seen so far.

A small building topped by a full greenhouse, a spherical object that looked as though a hot air balloon had been buried halfway underground, and several friendly crew members awaited my arrival. It was the site of Vashon Bioenergy Farm, where local engineering and agricultural tech have combined forces to create a mechanical digestion system for food waste to go in and for fuel - in various forms - to come out, all while maintaining net carbon neutrality.

A partnership like no other
Erik Cutter, president and CEO of Alegría Fresh, refers to himself as an urban farmer, biochemist, and nutritionist. He partnered with Jan Allen, founder of Impact Bioenergy, he says, to find a food waste solution for his farm, because he wanted it to achieve a negative carbon footprint.

"Jan and I met and we had a little talk, and we went, 'Hmm, you're doing that out on a limb and I'm doing this out on a limb. What if we put this together? What if we created the world's first carbon-negative food production system that recycles all of its own stuff?' And then we looked at each other and we said, 'Wait - we got it!"

Allen's lifelong career in engineering has given him the skill to develop machinery that does just this. Like a large-scale, high-tech compost bin, his "digesters" take in food waste and ferment it to create fertilizer, which can then create a nutrient- and mineral-dense soil mixture for farming. This system puts your countertop compost bucket to shame - unless you fuel your cars and six-acre farm with it, too.

At VBF, for every 8,000 pounds of food waste that go into the bioenergy farm - an achievable daily number, what with the Island Fresh soy plant as their next-door neighbor as well as various partners - the equivalent of 90 gallons of renewable gas and 950 gallons of organic probiotic fertilizer are produced.

According to Allen, the spherical balloon structure is the part of the project. It is a bio-gas refinery, which, alongside several compressors, takes the methane from the food matter and refines it into renewable natural gas that can then go into cars. (A Honda Civic parked at the site boasted a "RENEWABLE NATURAL GAS" sticker on its side.)

"Really, what we are about is full-circle carbon management," said Allen. "Taking that 'waste' carbon and repurposing it completely," added Cutter.

The system prevents food waste from eventually decomposing in landfills. In the US, landfill emissions are multiplying, and typically over 100 million tons of CO2 equivalent are sent into our atmosphere each year.

According to the EPA, municipal solid waste (MSW) landfills are the third-largest source of human-related methane emissions in the United States, accounting for approximately 15.1% of these emissions in 2018.

Vashon and the vision
Allen's digesters are designed to be completely modular, meaning they can be easily scaled to exist on a farm anywhere. This eliminates the need for transportation and could allow farms to produce on-site soil amendments and clean fuel to transport their own food product or supplies.

VBF performs this locally at the community scale with its digester system, named "Nautilus," to prevent food waste from being ferried off the island to landfills.

Cutter and Allen look toward solutions that not only halt carbon emissions but also sequester carbon, or draw it back down from the atmosphere. The estimated carbon drawdown of the VBF project totals 12,500 metric tons of carbon dioxide equivalent per year. This is like taking 2,710 cars off of the road, nearly neutralizing Vashon's own annual car emissions.

"Our company decided that there's lots of large-scale applications of this [technology], but somebody needs to community-scale it, somebody needs to scale it down and find the equipment or invent it. And that was a heavy lift, because we had to create that. What's new here is that we scaled it," said Allen.

Tasting the dark-green romaine grown in Alegría Fresh's "SoxxBoxx Gro Systems," which are full of regenerated soil mix in the greenhouse, I couldn't help but wonder who gets to eat the produce grown at VBF. It was rich - and likely the most nutrient-dense fresh produce I have ever tasted, since our food products on average travel over 1,500 miles before they reach our carts.

Regarding current local distribution, Allen said, "We've already delivered [food] to three universities, two corporate campuses, and farms, so we are at the point now where there is no reason this can't go far and wide." The team also mentioned deliveries to Ballard Ave. restaurants and the University District food bank so far.

"We're providing an incredibly disruptive system that disrupts food, fuel, and fertilizer," said Cutter. "That's our biggest achievement... [People] can't keep transporting food 1,500 miles or more. We've got to have local access. We have to build community resiliency. The idea that food is medicine is real, but for it to be true, people have to have access to these tremendous amounts of foods that farmers like me have access to."

These partners peer toward a grim climate future for "people of my generation," as they called it. "We have passed the tipping point," asserted Cutter.

They believe that community-level solutions are going to be the key to overcoming the climate damage we have done so far, and they are starting here and now.