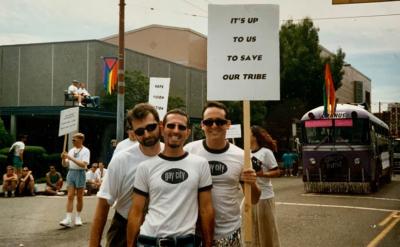 Twenty-five years ago this month, at the height of a different pandemic, Gay City was born. I founded the Seattle nonprofit with a band of young AIDS activists at a time when there was no treatment for the fatal disease. Infections were skyrocketing as people wearied of strict health guidelines, growing complacent and hopeless. Government resources were misallocated and community-based efforts had grown tired, safe and irrelevant.

Gay City started as a series of public forums that brought together hundreds of gay men to vent, learn and share ideas for reversing the tide of HIV. The forums were large and diverse, hilarious and heartbreaking, sexy, hip and controversial: the first one was called "Why Are Fags Still Fucking Without Condoms?" We had struck a nerve and stumbled on a new way to fight AIDS.

Rather than lecturing people to use a condom every time, we focused instead on the underlying causes of unsafe sex: hopelessness, homophobia and isolation. Gay City was radically experimental: creating dozens of programs to bring together gay men to promote self-esteem and build a sense of community. There were support groups and coffee klatches and theater productions. Programs for young gays, old gays, Black gays, Asian gays, spiritual gays, leather gays, bookish gays.

We launched a queer film festival and a gay summer camp. And something amazing happened. Guys became better at talking to each other about sex, they felt better about themselves and more connected to each other. Safe sex rates rose and new infections fell. Funding came pouring in from the CDC, the Gates Foundation and Elton John. The "Gay City model" was replicated in more than 80 cities around the world, including San Francisco.

Though I stepped down as Executive Director years ago, I take great pride that Gay City remains a leader in LGBTQ health and culture 25 years on. Today, as the world is consumed by a new and very different pandemic, my thoughts return to those early days of AIDS with all the fear, ignorance and official ineptitude. But also to the creativity, solidarity and compassion it unleashed. And I wonder: what will come of this plague?