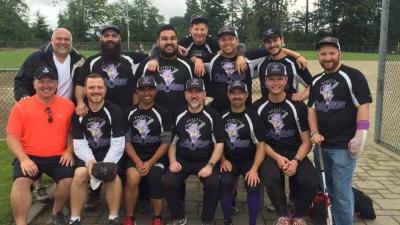 On Sunday, April 25, the Emerald City Softball Association held its first games in over a year, a delay due to the coronavirus pandemic.

The league made up of 25 teams is Seattle's LGBTQ+ and allied softball league, with participants anywhere from age 18 to their sixties. The ECSA has a strong legacy in Seattle, with a history dating back 42 years.

According to Van Yean, director of marketing and communications and player for eight years, the league has served many purposes: "It has served as a place of connection outside of the normal LGBTQ+ city life. The league has also helped members maintain their mental health and break the stigma that gays can't play sports."

Jon Ericson, who undertook the role of commissioner last year, had been on the board for ten years before taking the reins. Even though the workload was different than pre-COVID seasons, he was still busy, doing what he refers to as "just trying to keep the league together." Although the league has taken a hit, with about ten fewer teams than usual, the remaining 25 teams are still more than enough to create a healthy spirit of fun and competition for the 2021 season.

Although this year looks very different than past seasons, with barely any fans sitting in the now-caution-taped bleachers, opening day did have at least one in attendance, as she has been for the past seven years. Her name is Annette Lei-Sam, who could be seen cheering on her husband Rod, a Wolf Pack team member. Annette said, "He's excited to be back out there after not having a season last year." She came prepared with her own folding chair and a mask (a required safety measure for all in attendance) and socially distanced herself from all of the players, in a great spot over the fence just past third base. She added, "After a year without it, it feels great that we can come outdoors and do this."

Bringing people together
Since its beginnings, the league has brought together members of the Gay community and their allies with one common link: a love for the game of softball. Many members come from very different backgrounds and might not strike up a natural friendship if it wasn't for the league.

As Erickson said, "The league is a great community that has many interesting stories." One such story is that of Noah Busha, a hair stylist, and Jay Harris, director of philanthropy at Swedish Medical Center Foundation, who struck up not only a friendship but a relationship through their involvement with the league. They have been dating for four years now. Harris said, "It is amazing to be able to play the game you love with the person you love."

When they started playing in the league, they were on different teams. Now they play together on the Honey Badgers and thoroughly enjoy being able to integrate a competitive spirit with their relationship. But as Busha said, "We leave our home life at home and leave competition on the field."

The ECSA's director of events, Howard Russell, a league member for 17 years and Hall of Fame inductee, said, "This league has helped many people meet more members of the local LGBTQ+ community and given them chances to really get to know each other." (Russell is not only an ECSA legend but also a well-known local drag queen, Lady Chablis, who serves as the reigning empress of the Imperial Sovereign Court of Seattle, a local nonprofit.)

Not only does the league bring together local softball lovers but each team has its own sponsors, bringing local businesses into the mix. One such sponsor, the Sunnydale Saloon, located in SeaTac near where the league frequently plays, is a favorite "watering hole" for players after games. The relationship between players and sponsors is often symbiotic, with both parties feeling supported and satisfied.

Inclusivity
While the league contains mostly Gay players, it welcomes people with an inclusive spirit and a love for the game. Part of its attraction is that it has been hailed the "most organized" softball league in the area. This year, the league has 25 teams and four brackets. Those interested in playing go to a skills clinic where they can play with current members. After that, they are placed with a team based on their skills, which leads to an appropriate level of competition and fun for each player and team.

The ECSA Board of Directors consists of nine elected members and nine appointed members, all passionate volunteers. This year, the board added a new position, the diversity and inclusion director, filled by José Vazquez. Yean said, "This is a position that we've known we have needed."

Looking ahead
The 2021 season will run from April to July. After that, the league will prepare for the Gay Softball World Series, run by the North American Gay Amateur Athletic Alliance. According to the NAGAAA website, it is "the largest annual, LGBTQ+, single-sport, weeklong athletic competition in the world" and includes teams from 46 member cities across North America, including Seattle. The 2021 Gay Softball World Series is scheduled to be held from August 29 to September 4 in Columbus, Ohio.

With membership down due to the coronavirus pandemic, the ECSA hopes to gain more members for next season. The ECSA prides itself in being "both fair and safe," as Membership Director Holden Knecht describes it, and the league will be looking for opportunities to increase its numbers in the future. Commissioner Ericson believes that next season, membership will continue to climb, since many who opted out of this year have expressed their excitement and eagerness for getting back to it after they feel it is safe enough to do so.

If you or someone you know might be interested in joining the league, go to emeraldcitysoftball.org or email Holden Knecht at membership@emeraldscitysoftball.org for more information.