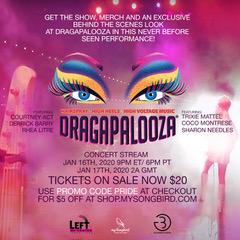 DRAGAPALOOZA ushers in a new era of LIVE Music Drag Performances bringing together the brightest and most dynamic live performers in the world of international drag.

DRAGAPALOOZA began as a live show in 2017 at the El Portal Theatre in Los Angeles as an exciting twist from traditional drag shows. Equal parts rock concert, music theatre, fashion show and cabaret, the live shows feature LIVE singing with a LIVE band, rather than the traditional lip-synching to pre-recorded music.

"With the success of the sold-out live shows and a delayed Las Vegas residency due to the current health crisis, this will kick off the New Year right!" said Michael Benedetti and Ann Potenza. "The film celebrates the art form of drag and is the perfect antidote to spread joy while we wait for the live events business to rebuild."

The film is executive produced by Michael Benedetti and Chris Cox, produced by Ann Potenza and Josh Smith and directed by Chris Cox and Andrei Mignea. Cox also serves as the music director. The film's run time is 75 minutes.