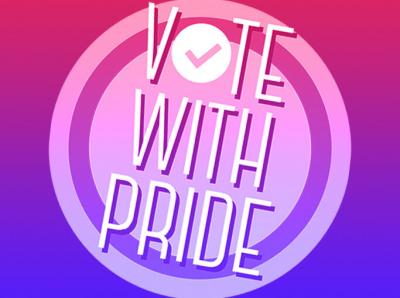 SEATTLE — On the heels of yesterday's Vote with Pride campaign launch event — and with just four weeks to go until election day — Seattle Pride and Drag Out The Vote have announced a collaboration to bring even more attention to the importance of getting out the vote among the LGBTQIA+ community.

On Sunday, October 18, on Seattle's Capitol Hill, the Vote with Pride event will feature an added boost of glitter and glam to its weekly voter registration and voter participation efforts with the special one-day addition of three Drag Out the Vote's Drag Ambassadors — Aleksa Manila, Vincent Milay, and Gaysha Starr.

All three Seattle-based drag artists will be on-site in patriotic attire along with Seattle Pride volunteers from noon to 4 p.m. at the corner of Broadway and Pine Street on the Seattle Central College campus for this festive, first-of-its-kind event. "We've seen a lot of firsts this year," said Gaysha Starr, who will be casting her first ballot since presenting as female full-time and completing a legal name change. "This year, the election is more important than ever, with so much at stake from basic human and civil rights, a global pandemic, and an economy suffering from both. Having drag queens and kings helping to get out the vote has never been done before...not like this, honey."

As on every Sunday through Nov. 1, Seattle Pride volunteers will be out with their weekly pop-up event registering voters, offering US Census forms, and distributing free Vote with Pride voter kits, including yard signs, window signs, campaign stickers and more. The collaboration on Oct. 18 with Drag Out the Vote is one more effort to engage voters of all struts of life to sashay their way to the ballot box, particularly 18-25-year-olds, queer people, people of color, and queer people of color.

"Since the sixties, drag has blended art and activism," said Dylan Austin, a Seattle Pride board member who also works with Drag Out the Vote promoting participation in democracy. "Drag queens and trans women ignited the Stonewall uprising in 1969, and ever since drag performers have commanded attention and been at the forefront speaking their minds on many of our most pressing public issues. Now they are uniting to increase voter turnout."

"Between LGBTQIA+ equality, transgender rights, queer workplace protections, BIPOC representation and equity, HIV/AIDS prevention and treatment, and gender-affirming healthcare, we have to see strong voter turnout in 2020 and beyond. The issues most important to the LGBTQIA+ community require leadership and action from equality-minded elected officials, and voting is the least we can do to make that kind of progress," added Austin.

While the Human Rights Campaign estimates that LGBTQIA+ registered voters vote at a higher rate than the general public, the fact remains that one in five LGBTQIA+ adults is not currently registered to vote, according to a national Williams Institute and Ipsos/Reuters poll.

"With more than five percent of adults in the state identifying as LGBTQIA+, it's important that we get as many as possible within our community to register and vote, as our collective voice can be quite powerful," according to Austin.

Drag Ambassador Aleksa Manila said, "Voting matters to me because as an immigrant FilipinX or API descent, trans-genderqueer drag activist, social worker, and US citizen, I want to exercise my right to vote and help shape the future of our community. A vote isn't just for one person; it impacts the lives of millions of people."

"Voting for me is...not just about queer rights but climate change policies and healthcare. We need to focus on what is important and all work together toward a future which is based on loving each other, and our planet," added Drag Ambassador Vincent Milay.

With the added help from their drag ambassador friends, Seattle Pride plans to distribute 1,000 campaign signs throughout it five-week Vote with Pride campaign. "It's an especially important time for the LGBTQIA+ community, BIPOC communities, and others who have experienced a history of oppression and marginalization to mobilize and take action," said Seattle Pride Executive Director Krystal Marx.

"Given the response we saw in just our first weekend, plus the calls we've received from people outside of Seattle requesting Vote with Pride signs, we've decided to expand our presence to two additional pop-up locations — one in Bellevue and the other in Burien — beginning next Sunday and running through Nov. 1," added Marx.

Throughout the five weeks of the Vote with Pride campaign, the public is invited to submit their election-related efforts online at www.SeattlePride.org for a chance to win pair of Alaska Airlines tickets to be awarded each week, plus a grand prize, which includes a Fjällräven Kånken Rainbow Pack, $100 Nordstrom gift card, and more. To enter, people simply complete actions within three categories — voter education, get out the vote, and advocacy. Each question, or task, will be worth points — the more points a participant accumulates during the week, the more times they are entered into the week's prize drawing to be announced at the end of the five-week campaign.

Drag Out the Vote is a nonpartisan, nonprofit organization that works with drag performers in all 50 states to promote participation in democracy. It educates and registers voters at drag events online and offline, by organizing local and national voter activations. Led by fierce drag kings and queens across the nation, it advocates for increased voter access and engagement in 2020 and beyond. Learn more at www.dragoutthevote.org.

Seattle Pride is a 501c(4) not-for-profit organization that produces the Seattle Pride Parade, Seattle Pride in the Park, and other pride-related events and promotions, as well as year-round statewide advocacy in support of diversity, inclusivity, and equal human rights for all.

Courtesy of Why For Good