Here are the brands supporting Seattle's Pride events this year 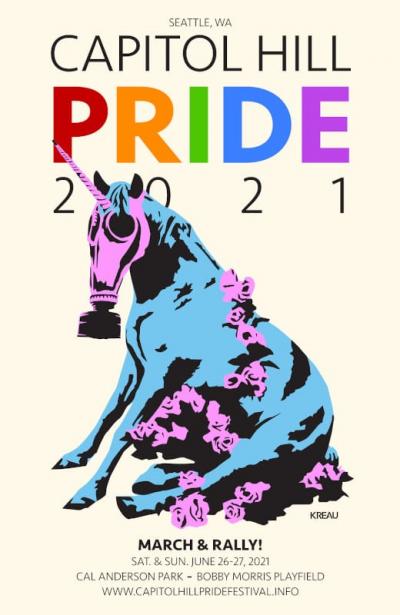 The last several years have seen an increase in brand support at Pride festivities. Come June, it's not hard to miss the rainbow billboards and plethora of corporates handing out branded Pride freebies at parades. There's good reason for the growing ire over rainbow capitalism and brands missing the mark on Pride merch (one TikTok lampooning Target's Pride collection, posted by @ylracbutler on April 30, has accumulated almost one and half million "likes"). If willing to turn a blind eye, however, there's a growing list of national and local companies supporting Seattle-area Pride festivities and LGBTQ-owned businesses, with proceeds going directly to Pride organizations or nonprofits supporting LGBTQ individuals.

Savor Seattle:
Seattle Pride has partnered with Savor Seattle, the TK box, for the month of June. A portion of proceeds from each box purchased benefits Seattle Pride. The box will feature nine items, including a 12oz bag of Broadcast Coffee's Breaker One 9 Blend, a bag of biscuit mix from Honest Biscuits, and a six oz. jar of liliko'i caramel sauce from Marination. Everything in the box is made by Seattle area LGBTQ+-owned businesses and producers. Boxes cost $119.99 each and are available for both local delivery and nation-wide shipping. Shipments will be sent out every Tuesday and Friday from June 8 through July 2, or until sold out.

ShakeShack:
From Monday, June 14th through Wednesday, June 16th, the New York-based burger chain will donate 25% of associated sales from its Kirkland, South Lake Union, and University Village locations to Seattle Pride, as part of its ShakeShack Gives Back initiative. Use code DONATE25 at checkout for online orders or mention the fundraiser to the cashier when placing an order in-person.

MoPOP - Rise Up: Stonewall and the LGBTQ Rights Movement:
Opening Saturday June 26, MoPOP will exhibit the cultural transformations that have taken place in the nearly 52 years since Stonewall. MoPOP has also curated a series of stories featuring local LGBTQIA+ activists and artists and their impact on Seattle. In partnership with Seattle Pride, MoPOP will raffle off five pairs of tickets to Seattle Pride's Protectors of Pride members.

Due to last minute scheduling, the Capitol Hill Pride March (not affiliated with Seattle Pride) does not have any partnerships or sponsorships this year, but is still showcasing a few vendors and artists ahead of their own festivities, which will be focusing on a late-60s, Stonewall and Summer of Love theme, "tye dyeing the connection to activism and police reform," according to Charlette LeFevre.

Pride Shades
Proceeds from Pride Shades, which sells the translucent-rainbow sunglasses, will go towards True Colors United, the nonprofit founded by Cyndi Lauper that focuses on homelessness in LGBTQ-youth.

Moving beyond the PNW but still on the West Coast, Stoli Vodka is continuing its partnership with the Harvey Milk Foundation, launching a limited stock Stoli Harvey Milk Global Collector's Edition Bottle. The bottle, launched on May 22nd in honor of Harvey Milk Day, features the art Paraguayan artist Oz Montania.Stoli also features a Spirit of Stonewall limited edition bottle on their website, and both bottles can be found locally through reservebar.com.