Arundel Books: A bundle of joy 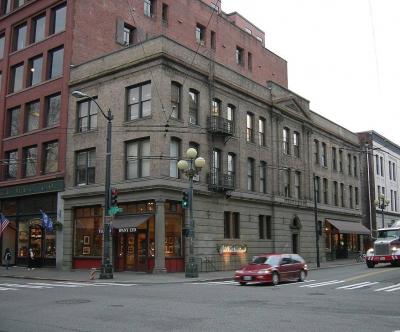 Before even entering the front doors of Arundel Books, customers are greeted by the friendly face of Briana Schwartz at the register on the other side of the big glass window. Surrounded by book displays, she encourages readers young and old to enter the store - and use hand sanitizer use before touching any of the books.

Visitors to the bookstore in the pristine and ornate white building, decked out with intricate pillars and Edison-style light bulbs, are taken back in time, as if sucked into a history book on Seattle's Pioneer Square district.

Ornate marble carvings of the beer-making process line the walls. "This was originally built as a brewery for the Capital Maulten Brewing Company, which became Olympia Beer," owner Phil Bevis, informed me while we discussed all the books Arundel has to offer its Queer readers.

Bevis founded Arundel Books in 1984. "A long, long time ago, in a galaxy far, far away!" he quipped as he explained some of the interesting history of the store.

The LGBTQ community has been pivotal for Arundel Books over its 37 years. "Let's face it," Bevis said, "folks in the LGBTQ community just, on average, read more." As a result, over the years, Arundel Books has included more diverse works of fiction and nonfiction by LGBTQ authors, thanks in part to the amazing patronage Queer readers have given the store.

"We would shelve fiction and biographies by LGBTQ writers in the LGBTQ section, and now, that isn't the case," Bevis explained. "The work has become mainstream, and so it's featured in all of the sections."

Arundel Books still features an LGBTQ section, smack in the middle of the store, but as Bevis pointed out, great works by LGBTQ authors, and stories centering Queer experiences, can be found in just about any genre and section of the store.

The store carries a wide variety of books, some of the most popular titles at the moment being The Hill We Climb by poet Amanda Gorman and Meditations by Marcus Aurelius. "Surprisingly enough, we've sold nearly a dozen Communist Manifestos since moving to this location," Schwartz added.

As for LGBTQ titles, Schwartz and Bevis pointed me toward a variety of wonderful works, both fiction and nonfiction. For younger and middle school- and early high school-aged readers, Schwartz recommended Every Heart a Doorway, a fantasy adventure novel featuring an asexual main character. The series, Schwartz pointed out, features many LGBTQ characters, as well as other people with identities not usually seen in heroes. And the best part of the representation is that their identities don't consume the characters. While the protagonist is asexual, that's not what her story is about; it is just one part of who she is.

For older readers, Bevis recommended The Argonauts by Maggie Nelson, a beautiful prose memoir that tells the story of family, identity, and change. Maggie navigates her life as a new step-parent while trying to build a home and support her husband during his transition. The emotions of the book are raw, and the text itself ties in brilliant theorists, philosophers, and some of the greatest minds of the last century.

When asked why our readers should shop at Arundel Books, Bevis and Schwartz were candid, telling us that their store is no more deserving of customers than any other independent bookstore. "Support independent bookstores in your community, wherever that may be. It doesn't necessarily have to be us," Bevis said.

However, Arundel will continue to integrate Queer authors and texts into all sections of the store, and continue to create a safe space for all customers. "Books should be for everyone," Schwartz added.

And at Arundel Books, everyone is welcome.

Note: The Argonauts will be the first book in our new SGN Summer Reading Book Club! If you are interested in reading along with other bibliophiles, follow us @sgn_books on Instagram.